Basketball Back on Floor For Sunday Tilt with UNCW 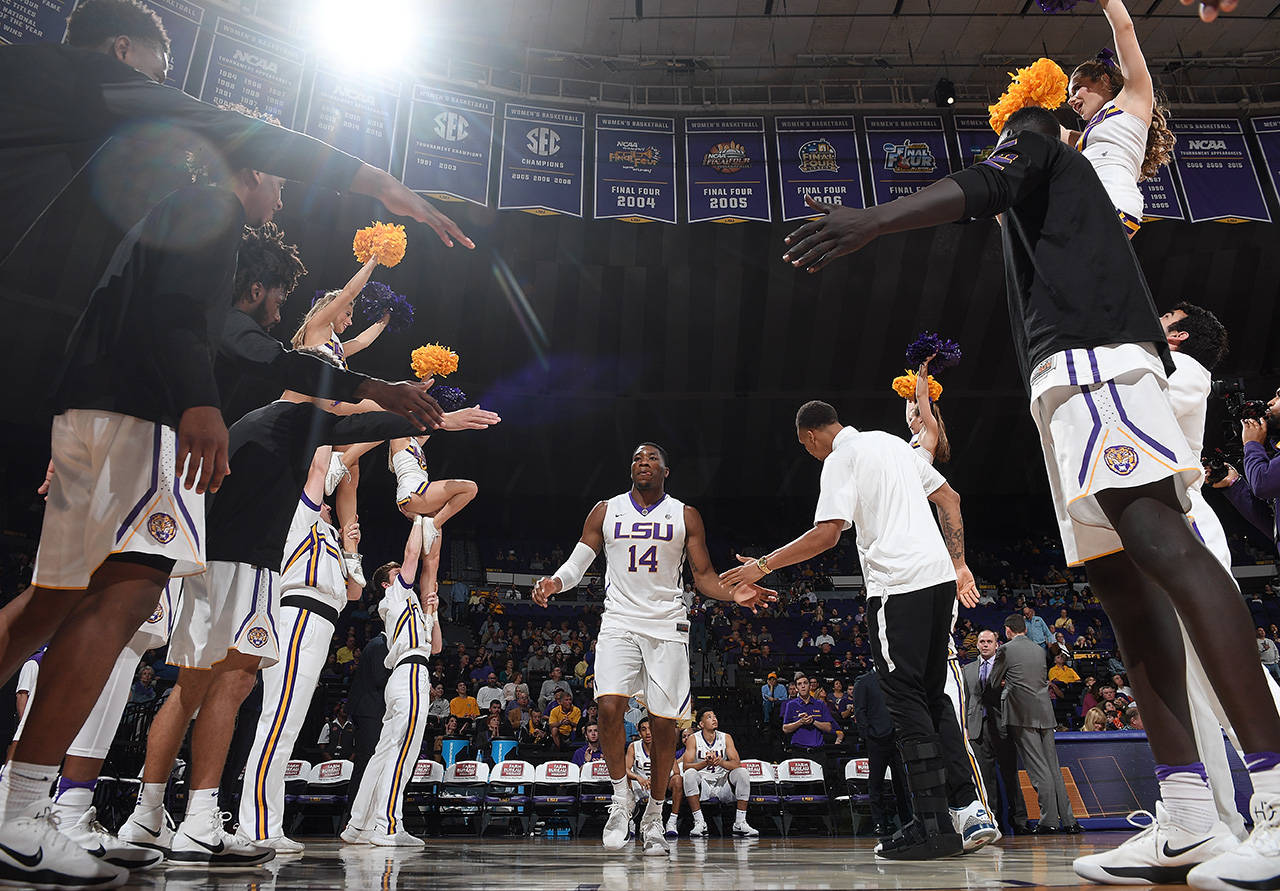 BATON ROUGE – With Southeastern Conference play in site and less than a month away, the LSU Tigers begin a stretch of five home games in 13 days prior to Christmas, starting Sunday at 4 p.m. in the Pete Maravich Assembly Center against UNCW.

Tickets will be available at LSUTix.net with on-site sales beginning at 2:30 p.m. on Sunday at the Maravich Center upper ticket windows. LSU students are admitted free with valid student ID.

Tickets for Christmas Wadecation can be purchased online at LSUtix.net or at the ticket windows Sunday prior to the game.

Promotions, Happenings At The Game
The giveaway for the game is the ugly holiday sweater t-shirt for the first 2,000 fans at the game while at halftime NOLA native and Nashville recording artist Karen Waldrop will perform some of her top songs. The Tiger Girls and LSU Cheerleaders will be on hand as always to perform in the pregame.

About UNCW
UNCW comes in off an exam break of their own and an overtime loss at East Carolina in their last outing at the end of last month. The Seahawks are 2-4 under first year head coach C. B. MCGrath, who spent many years with Roy Williams at Kansas and North Carolina. The team is led by junior DeVontae Cacok who has five double doubles this season, if fourth in the Colonial Athletic Association in scoring (19.3), first in rebounds (13.0) and second in field goal percentage (62.7%, 47-of-75).

Of UNCW, LSU Coach Will Wade said Friday at his media session: “They score the ball well. They are as good as I have seen in transition. They will be, by far, the best transition offensive that we have played all year. Devontae Cacok is a monster. Big kid. 6’7” kid. Led the country in field goal percentage last year, he has to be up there this year. 19 points and 13 rebounds per game. He is just a monster. He knows where his bread is buttered. He gets in that paint and wheels and deal in there and they look for him. The guard (Jordon) Talley is a good player. He is from Virginia, I was familiar with Talley. (Marcus) Bryan is a big kid. They play fast. They are really good in transition and it will test our transition defense that is for sure.”

About LSU, Coach Wade Comments
The Tigers are 4-2 entering the five-game run, winning 84-60 against UT Martin in the last contest for LSU on Nov. 29 before their break for the exams. Skylar Mays led LSU with 18 points and three assists, while Duop Reath and Daryl Edwards off the bench had 15 each. Tremont Wates had a tough shooting game with just eight points, but he had 10 assists, four steals and just one turnover.

Coach Wade, as mentioned, met with the media on Friday and here were some of his comments:

On what he has learned about his team in the first six games…
“We have learned a lot. We see how we react in stressful situations. You don’t know how guys are going to react, how guys are going to play when the lights come on. So we have a better idea of who we can count on, who can do what in certain situations. Certainly we take that into account as we move forward here and try to make sure we are putting guys in the right positions to be successful.”

On if he found anything that they can play off of now…
“I think certainly we are pretty talented offensively. I think that is a real positive for us. I think our guys enjoy playing together, they share the ball well. Our assist numbers have been pretty good. I think that is something that is good and will carry through. I have been pleased with our guys. They are learning how to prepare for a game. I think we are pretty good when we have basically a two-day prep. (Friday) we will start our prep for Wilmington. Our guys are able to carry over most of what we go over into the game. I think if we continue to do that, I think those are things that will bode well for us are we move into conference play.”

On working on mostly defense in practice and not offense…
“I wouldn’t say no offense. Very little, limited offense. We have always been pretty good on defense, wherever we have been. I have never spent half as much time on defense as I have here. We have spent an ordinance of time on our defense here. We still are just not very good. I bet our practice time has been 85 (percent) to 15 defense to offense since we started practice. We just have to keep getting better at it. We just have to keep trying, keep going back, keep getting back to basics, and keep doing it. That is what we spent.”

On how Tremont (Waters) has progressed on defense…
“Tre is a sharp kid. He went back and watched some clips of my team last year. I had a little (JeQuan Lewis) guard who is really good, he plays for the Milwaukee Bucks G-League team. Tre asked me how he was able to get through all the ball-screens. I said ‘Good question Tre. He stayed after practice every day and we did these drills for about five or 10 minutes after practice.’ To Tre’s credit he wanted to do that. We have been doing that. Sometimes you don’t want to ask questions if you don’t want to know the answers to them. He wants to improve. He wants to be better. We have to be better at our point of attack defense. It really starts with your point guard. Tre really wants to be that guy to set the tone for our defense. I think we are moving in a direction to where that can happen.”

On Brandon Sampson…
“He is better. We have progress for the first time in a while. We are going to have him reevaluated after the game on Sunday. He doesn’t wear a boot in practice anymore (riding a bike during practice). So that is a positive step. I don’t anticipate anything to be much quicker than what we talked about before.”

On if he has seen improvement from Duop Reath…
“He is getting better. We are going to try and change our ball-screen coverage up. I think we may be asking some guys to do some things that maybe they can’t do. We have to adjust a little bit what we can do and make sure we are putting guys in the best positions.”

On if he eventually wants to have a set rotation…
“Typically we want to play eight or nine guys, but we have to find eight or nine guys that can play that we feel comfortable with. You would like to settle in sooner rather than later, but we are certainly not settled right now. We just don’t have a comfort level with that many guys. We have some of our guys who are pretty good on defense that are pretty big liabilities on offense. Some of our guys are pretty good offensively, are pretty big liabilities on defense. We have very few guys that are two-way players or have any sort of being solid. As a coach you are mixing and matching. You have to have a couple of guys out there who can score. You have to have a guy out there who can guard. You are just mixing and matching to fill everything. Our most solid guy on offense and defense is Wayde Sims. He is by far our most solid guy. He doesn’t wow you on offense, but he is always moving, always in the right place, he has good feel, he knows what he is doing. Defensively he is rarely out of position. He can see ahead of the play. He can communicate. He is our most solid guy on both ends really at this point. That is why he plays a lot. We have to have more guys that can do multiple things would be the best way to put it.”

On the importance of these next five home games…
We have to take them one at a time. That is important. We have to handle our home court. We talked about making the Maravich Center a tough place to play. So we have to make sure we handle our business here and make some good efforts.”

On if it the players being done with school makes a difference…
“There is a lot of distraction going on during the school day. Most of them are up for breakfast at 7:00 or 7:30. They are gone all day with class, tutoring, academic advising appointments, and different things like that. By the time we get them in the afternoon, they have been moving pretty much all day. I am hoping we can get some of this defensive stuff corrected. I have typically done some shooting, free throws and stuff like that in our morning session over the break. We are going to do defense in morning session over the break. Try to work on some concepts, make sure we know what we are doing and where we are supposed to be. I am hopeful with this extra time that will be a big area that we can improve. My teams in the past we have not been good on offense. We have had to manufacture points. We hadn’t been able to shoot it well. We couldn’t shoot very well last year. We had to spend a lot of time on offensive skill development, shooting, dummy offense, running through our sets, and things like that. Hopefully we will be able to flip the script and make the same sort of progress that we made with our offense at those other places with our defense here.”

Broadcast Information
The game will be available on the affiliates of the LSU Sports Radio Network (Eagle 91.1 FM in Baton Rouge) with the Voice of the Tigers Chris Blair joined as usual by former LSU head basketball coach John Brady.

The contest will be streamed on the SEC Network + with Lyn Rollins and Victor Howell on the call.

Next Up
The Tigers host Houston as the teams meet for the third straight season in the front half of a new home-and-home series. The SEC Network will have the over-the-air telecast of the game at 8 p.m. at the Maravich Assembly Center. Tickets are available at LSUtix.net.