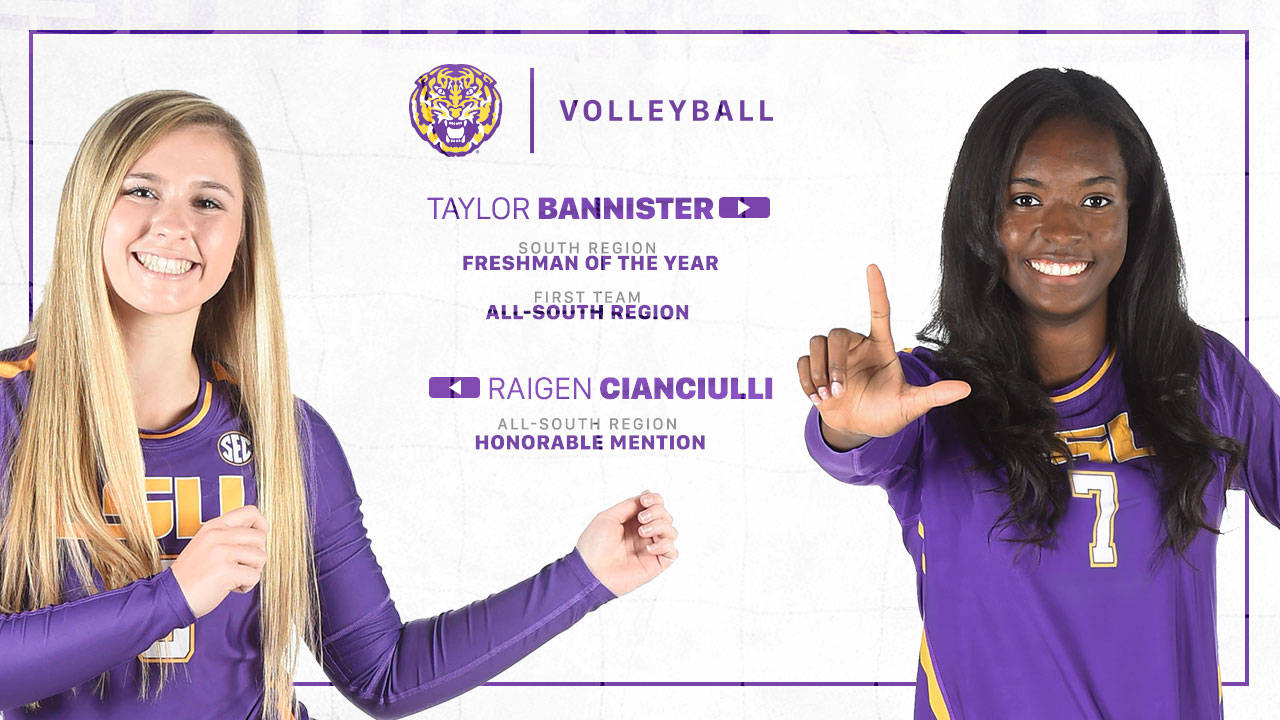 Bannister is just the second Tiger in program history to be named AVCA South Region Freshman of the Year. Cianciulli’s honor is the sixth honorable mention honor in program’s history. The region honors are the most for LSU volleyball since the 2010 season and the first region honors since 2014.

Bannister led the Tigers this season with a total of 361 kills, averaging 3.22 kills per set. She hit .252 on the year and recorded a total of 402.5 points to go along with 77 blocks. She registered four 20-plus kill matches and 16 matches with 10 or more kills. In SEC matches only, Bannister was one of four freshman in the top 10 in kills per at 3.39. She led the Tigers in kills in a total of 19 matches.

“Taylor made a tremendous impact on our team,” said head coach Fran Flory. “We are excited she is being recognized. She certainly has a bright future ahead of her. This is the first step of her career to be recognized nationally. We are looking forward to what she will bring in the future.”

In non-conference action, Bannister put together a career-high 26 kills on 38 attacks with just three errors for a .605 hitting percentage in the Tigers’ five-set thriller over High Point on September 8. That performance helped her earn her first SEC Freshman of the Week honor which was the first weekly honor for LSU volleyball since 2014. Bannister also earned the honor two more times in the year and was named to the All-SEC and All-Freshman Teams.

“Raigen is going to be one of the better liberos that we have had in a long time,” said Flory. “She is a great defender and she had an amazing season. We are excited for our future with her as well.”

The Spring, Texas native registered 26 double-digit matches and 10 matches of 20 or more digs. She led the Tigers in digs in 24 matches this season. She tallied a career-high of 29 digs in the Tigers’ four-set victory over Auburn on November 15. Cianciulli earned SEC Defensive Player of the Week after recording a total of 44 digs in two LSU victories over Auburn and Alabama.

The Tigers ended their season last weekend with a 20-10 overall record after falling to No. 9 San Diego in four sets in the first round of the NCAA Tournament. This was the seventh season with 20 or more wins under head coach Fran Flory. LSU finished fourth in the SEC which is the best finish since 2014, and the Tigers earned an at-large bid to the NCAA Tournament for the first time in three years.