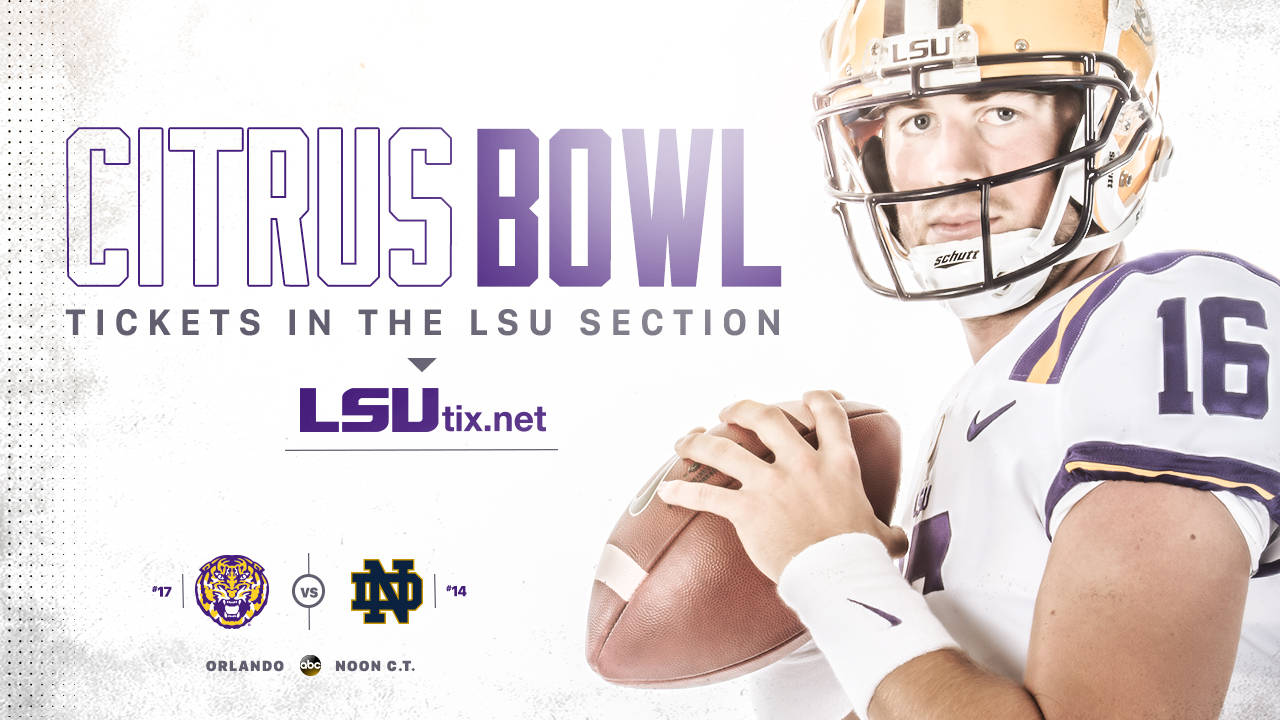 BATON ROUGE – Two of college football’s most storied programs will meet in a bowl game for the fourth time when 17th-ranked LSU faces 14th-ranked Notre Dame in the Citrus Bowl presented by Overton’s on New Year’s Day in Orlando.

LSU will be making its second consecutive trip, and fifth overall, to the Citrus Bowl, while Notre Dame will play in the bowl for the first time.

“Anytime you play Notre Dame, you have great respect for them and what they’ve accomplished through the years as a program. I watched them play several times this year. They played Georgia very tough and they beat some very good football teams. I have played against them numerous times during my career and they are always a well-coached with big-time athletes.”

The Citrus Bowl will be nationally televised by ABC with a noon CT kickoff from Camping World Stadium (65,000). The game will also be streamed on WatchESPN, and will be broadcast on the LSU Sports Radio Network.

Tickets in LSU’s sections of the stadium are available at www.LSUtix.net.

“This is a tremendous matchup for our fans and college football,” LSU Vice Chancellor and Director of Athletics Joe Alleva said. “These are two historic programs with loyal fans all over the world. We know from experience this is a great New Year’s Day Bowl in a destination city and I want to thank the Citrus Bowl for selecting us.”

LSU, winners of six of its last seven games, brings a 9-3 overall mark into the contest. Notre Dame won eight of its first nine games, including victories over Southern Cal and Michigan State, and also stands at 9-3 overall.

LSU, which beat Louisville in last season’s Citrus Bowl, will compete in a postseason bowl game for the 18th-straight season and the 49th time in its history. The Tigers are 25-22-1 in bowl games including 2-2 in the Citrus Bowl.

The Tigers will be the designated home team, as it plays for the 14th 10-win season in program history
The 2018 Citrus Bowl presented by Overton’s marks the 12th meeting between LSU and Notre Dame dating to 1970. The Fighting Irish have a 6-5 advantage in the series, while LSU has won 2-of-3 bowl matchups.

The Citrus Bowl contest will be the first meeting between LSU and Notre Dame since the 2014 Music City Bowl when the Irish kicked a 32-yard field goal as time expired to win, 31-28.