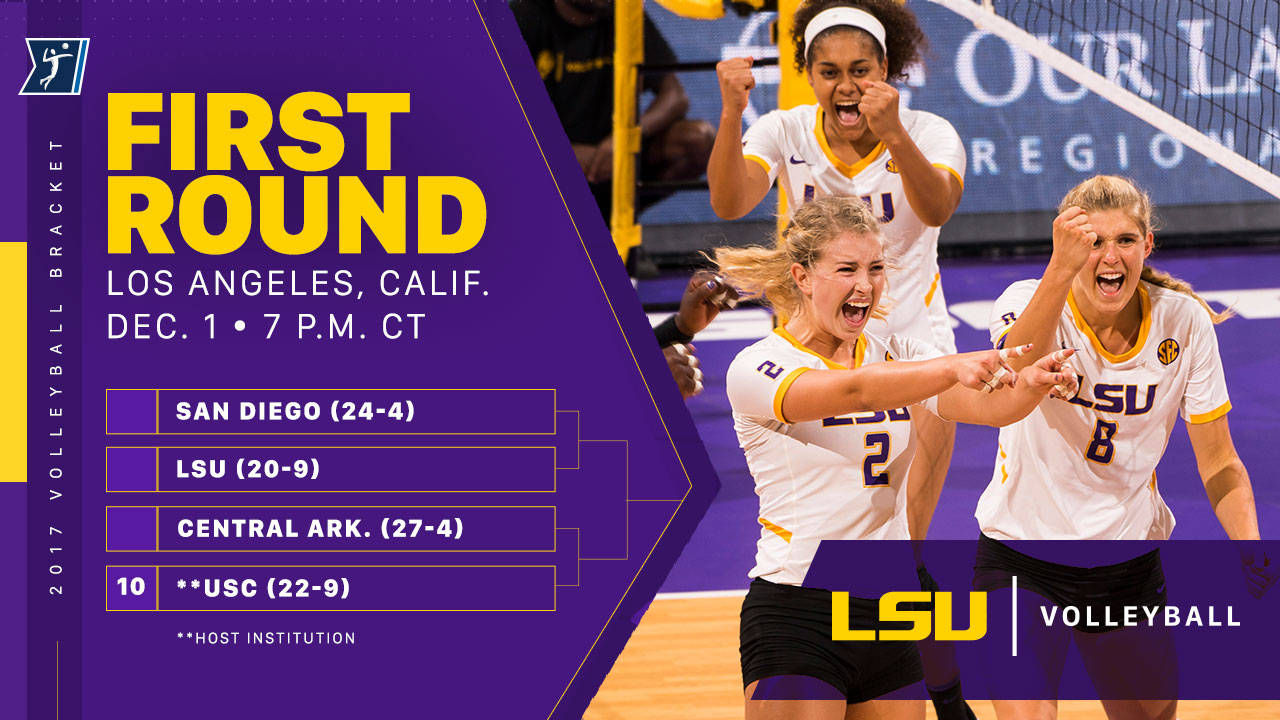 LOS ANGELES – The LSU volleyball team will make its 15th appearance in the postseason as the Tigers open the 2017 NCAA Women’s Volleyball Championship Friday, facing San Diego at 7 p.m. CT at the Galen Center on the campus of the University of Southern California.

The matchup will stream live on the Pac-12 Network Plus. Fan can access the match online here. Paul Duchesne will be the play-by-play announcer.

The Tigers earned an at-large bid to the tournament for the seventh time under head coach Fran Flory. LSU and San Diego will open the first round on Friday, while No. 10 USC will take on Central Arkansas at 9 p.m. CT later that day to close out the first day of action. The winner of the two matches will meet Saturday at 7 p.m. CT with a regional berth on the line.

Fran’s Final Thoughts
“San Diego is a great volleyball team. They control the ball well and they have a really good setter. They are a middle-oriented team which is similar to us. There right side is super impactful just like Taylor Bannister is for our team. In a lot of ways it’s a mirror image of us. They play a different style and are certainly physical. Playing clean and low error on our side is going to be vital.”

Last Time Out
The Tigers are coming off a five-set victory over Tennessee on November 24. They were down 2-0 to the Vols before making a comeback to win in five sets. The Tigers defeated the Vols by scores of 19-25, 21-25, 25-23, 25-22, 15-9. Freshman Taylor Bannister led the Tigers with 16 kills. Sophomore Jacqui Armer and junior Toni Rodriguez recorded 15 kills each, while senior Gina Tillis registered her 28th career double-double and her 12th on the season of 10 kills and 13 digs. Freshman Raigen Cianciulli recorded a match-high 24 digs.

Scouting San Diego
San Diego comes into the match with a 24-4 overall record and a 17-1 record in the West Coast Conference. The Toreros were the WCC Champions for the 10th time in program history and their first since 2013. They ended up co-champions with BYU, but they earned the conference automatic bid due to the head-to-head conference tiebreaker.

Tigers in the NCAA Tournament
>> LSU comes into postseason play with a 20-9 overall record. The Tigers finished fourth in the Southeastern Conference behind Missouri with an 11-7 record. This is the seventh season under head coach Fran Flory that the Tigers have reach 20 wins in a season.

>> The only players on the team that have experienced NCAA postseason action are the four seniors in Gina Tillis, Cheyenne Wood, Kelly Quinn and Khourtni Fears. Those four were on the 2014 team that competed on that team. Tillis and Quinn were the only two that saw action in the two matches. Tillis played four sets and recorded eight kills and Quinn registered five digs in the seven sets played.