Basketball Heads Into Break with Win Over UT-Martin 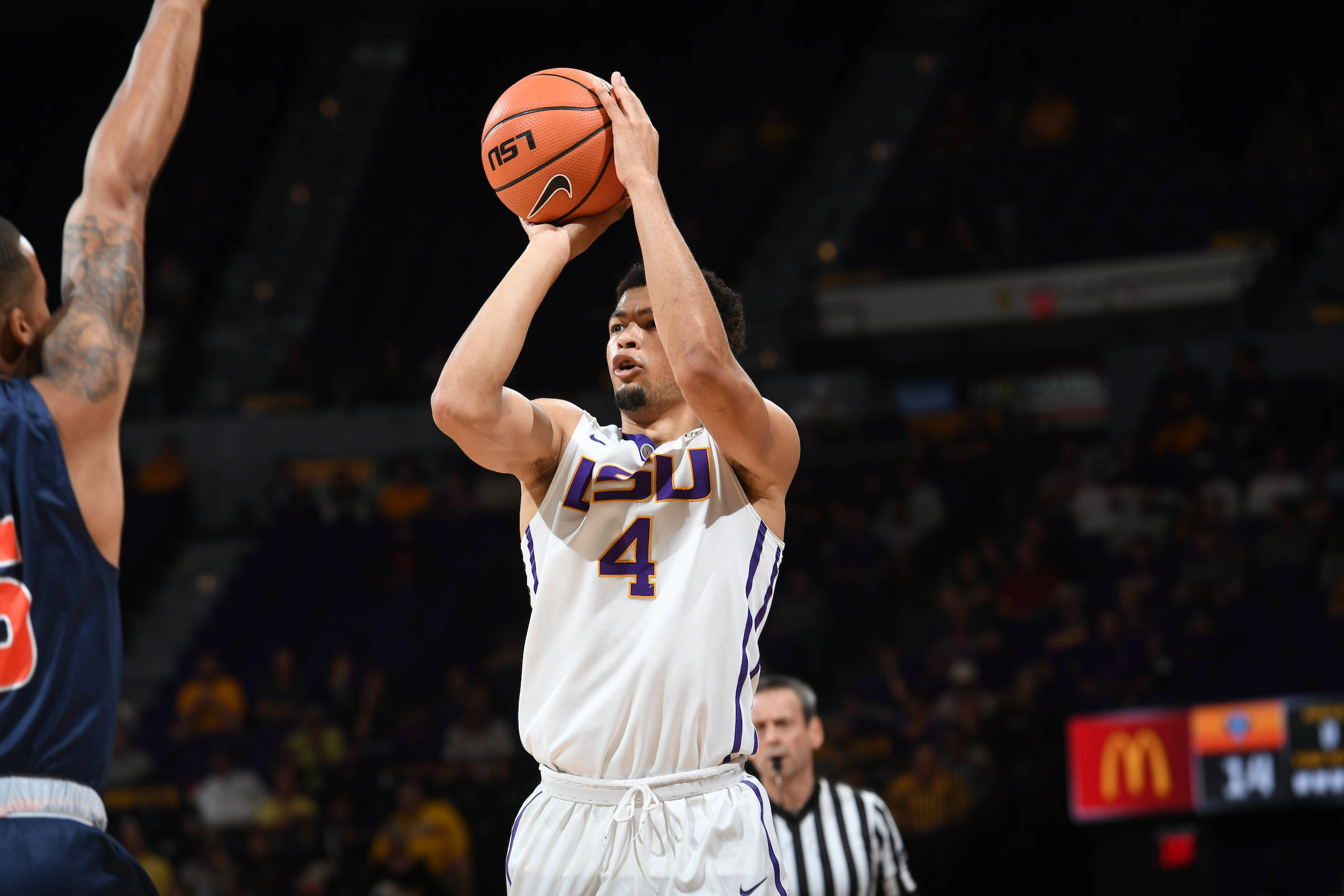 BATON ROUGE – The LSU Tigers won for the third time on their home floor this season at the Pete Maravich Assembly Center and heads to the semester final exam break after an 84-60 win over UT Martin Wednesday night.

LSU players will now concentrate on the semester exams that run through Dec. 9 before resuming play on Dec. 10 at 4 p.m. against UNCW. That will start a stretch of five home games in 13 days for the Tigers.

Skylar Mays had the big scoring game for the Tigers, hitting four treys and scoring 18 points in 34 minutes with three assists. Duop Reath nearly had his eighth career double double with 15 points and nine boards, while Daryl Edwards made the most of his 25 minutes off the bench, hitting three treys to get 15 points with three assists and no turnovers.

Freshman point guard Tremont Waters didn’t have a great scoring night, hitting just 2-of-10 shots for eight points, but he had a season high 10 assists, becoming the first player since Mays a year ago with double figure assists in a game.

UT-Martin (1-6), playing in Baton Rouge for the second time in a week after losing at Southern, was paced by Matthew Butler had 17 points and five assists to lead the Skyhawks, while Darius Thompson added 16 points.

Although the rebounds were even at 33-33, LSU had just seven turnovers compared to 18 for UT Martin. That led to a 29-5 advantage in points off turnovers for the Tigers and 38-22 in the paint. LSU also had a 15-8 advantage in second chance points and again used its bench well, getting 43 bench points.

The Tigers continued to pour it on getting the lead to as much as 18, 36-18, on the third of four Mays threes in the opening half. LSU lead, 41-24, at intermission.

SECOND HALF
Coach Wade and staff were looking to avoid a final 20 minutes when the Tigers and Samford back earlier in November each scored 58 second half points after LSU built a big halftime advantage. Only briefly did it appear UTM might get back in the game, cutting a 20 points lead to 12, 52-40 on a Thompson three-pointer.

LSU missed on its ensuing possession, but UTM missed a trey attempt that would have taken the game back to single digits and the Tigers on a layup by Mays, a three by Edwards and a Reath jumper took the game back to 19 points, 59-40, with 10:05 left. LSU’s biggest second half lead was 24 points in the final five minutes as the Tigers led for 35:15.

OTHER NUMBERS
Skylar Mays: Tied his career high in field goals made (6) for the fourth time and 3FG made (4) for the second time.

Aaron Epps: Season high for rebounds (8 and six were offensive).

Opening Statement …
“Solid win. I thought we guarded well in the first half. Second half it got away from us a little bit there. We gave up too many threes. I wish we would have rebounded a little better. We shared the ball well on offense which was a positive. Overall it was growth from our trip to Maui. Now we have some time off and we have to continue to improve and continue to get better.”

On the boost Daryl Edwards gave the team tonight …
“It was big to find another shooter, another scorer. That is what Daryl can do. We got off to a little bit of a slow start and Daryl got us going. I thought he played well. He did some good things defensively as well.”

On what he wants to see improved during their time off …
“Defense. Our ball-screen defense was better today. It wasn’t like a sieve. We were able to at least stop some folks today. That was a plus, that was progress. We have to continue to get better defensively. I am a little concerned about our rebounding. We are doing a decent job blocking out. We just have to catch the ball with two hands. We just fumbled a couple of balls tonight. We gave up some extra possessions which would kill us. Free-throw shooting, we have to get better there. We missed two front ends on one-and-ones. We were 12-of-20 from the line. That has to certainly improve. We have to take better threes on what I would consider catch and shoot threes. We were 9-of-17, on the others we were 1-of-13. We just have to be able to take better threes. I don’t mind taking 30 threes. We just have to take the right ones and take better ones. I thought (Aaron) Epps did a good job on the offensive glass. He had six offensive rebounds. I thought that was a big positive. Tremont (Waters) shared the ball once you kind of knew it wasn’t going to be his night shooting the ball so he got the other guys involved. Daryl and Skylar (Mays) did a nice job as well.”

G SKYLAR MAYS
On getting the hang of their match-up zone …
“Coach told us before the game that they do a really good match-up zone. You know, it got to us at first, but Daryl (Edwards) really sparked us getting those opening shots and that kind of got us going.”

On what he saw from Daryl Edwards …
“Daryl is a great player, especially when he’s playing confidently. You can tell he knows what he’s doing out there. He knows how to play. We just try to keep him confident and try to make sure he’s aggressive at all times.”

On difference in the second half …
“You know I don’t want to say it’s not easy to play when you’re up, but you know it’s a lot easier to slow down and take things for granted. That’s part of us being a young team and not having great chemistry. We’re just going to get better with that.”

F DUOP REATH
On tonight’s overall performance …
“We did okay. The first half we came in with the right intensity and the right mindset defensively. But, second half we slipped up a little bit. Our rotations weren’t very sharp and we let them score.”

On the defensive lapse in the second half…

“I’d say it’s probably just lack of focus coming into the second half. Once you get that lead you really got to maintain that focus. Coach will be trying to let us know that it’s ‘zero-zero’ in the second half so you’ve got to come in with the same intensity as the first half.”

Opening statement…
“I want to take my hat off to LSU, to Coach Wade’s team. He’s got a fine team over there. They’re going to win some games. They’re impressive, and they have a really nice team.

On how he feels his team played…
“It was a tail of two halves. We played spotty. We were playing tit for tat in the first half. We had a lead and had a lot of enthusiasm. When we subbed, a couple guys picked up some quick fouls. We just went downhill with our energy and our focus. We ended the half kind of bad. Started the half bad and got better toward the end. I’m still trying to fight through and get some guys all on one page for forty minutes.”

On which players stood out…
“Darius Thompson, I was proud of his play today. He’s progressively getting better and we need him to do that. We got to get three or four guys playing well at the same time. I thought Jailen Gill had a nice game tonight. He played hard. I’m just looking at effort, want, and will. Not necessarily numbers. I just want five guys out there that are going to play hard. Whenever you have nine new guys that we brought in this year we’re going to find five that want to play together and play hard the whole game.”

On what they could improve on moving forward…
“We still have to find ourselves offensively. Find that third or fourth score and we have to maintain our focus and our game plan. We put together a great game plan. We just have to follow that for forty minutes. We can’t dig ourselves in a hole. I’m being honest, if you look at the percentages, if you would’ve told me that we would’ve shot almost 44 percent, 33 percent from two, 33 percent from three, and 73 percent almost from the foul line, I would’ve taken that. We can’t give up on those 30 points to LSU on turnovers. It doesn’t work out in your favor.”