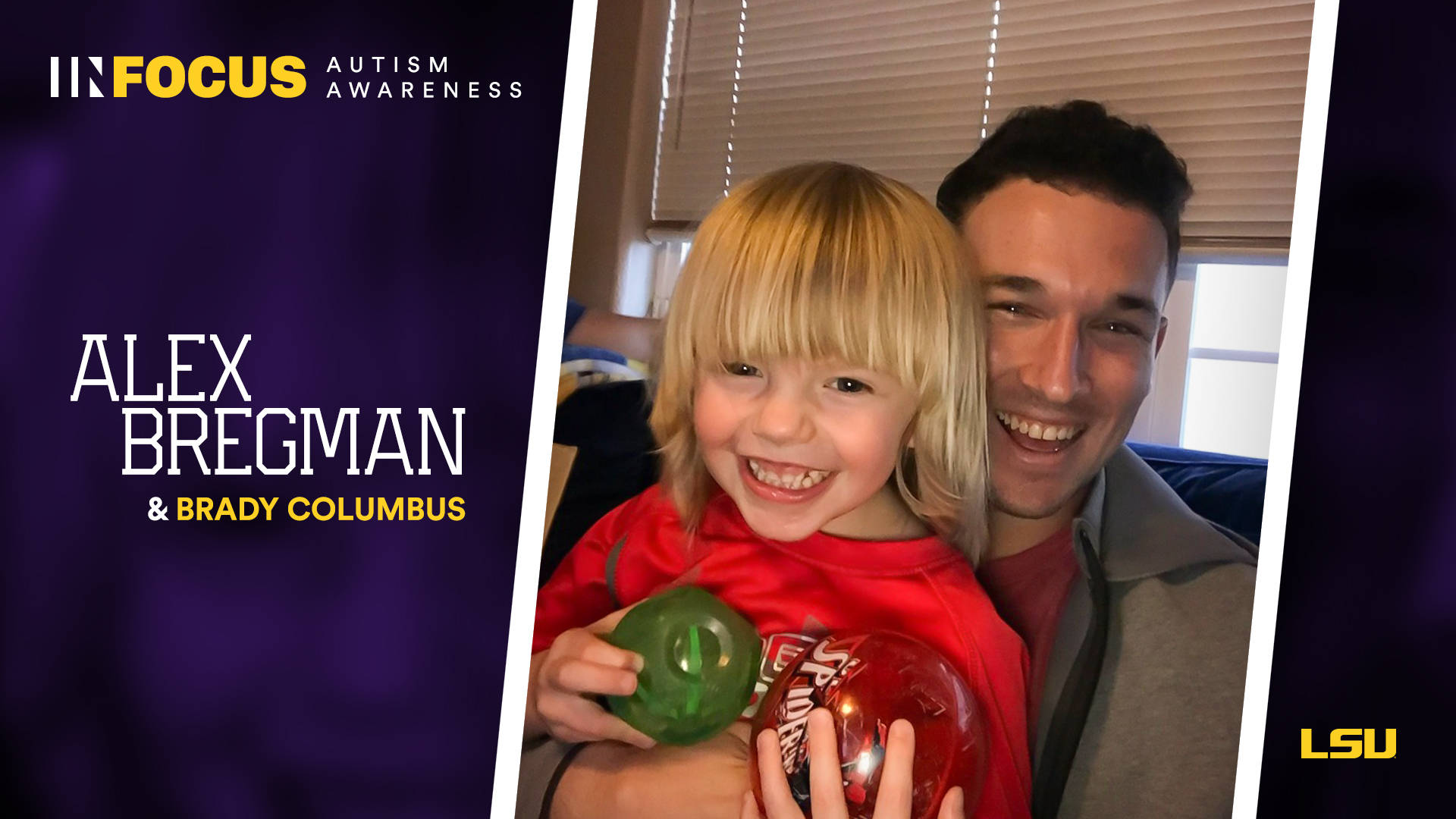 Editor’s Note:  Pulitzer Prize winner Jeffrey Marx is the author of “Walking with Tigers: A Collection of LSU Sports Stories” – which includes a chapter on Alex Bregman – and five other books. You can follow him on Twitter: @LSUTigersBook

The letters “AB” have always had double meaning for baseball star Alex Bregman – serving both as his initials and as the standard abbreviation for an at-bat.

Now, though, Bregman, a former LSU All-American and the current third baseman for the World Series champion Houston Astros, is using those letters in another way: to support a cause that has long been special to him.

“AB for AUDS” is the name of his new organization to help children with autism. The “A” and “B” stand for the first names of two boys with autism. The “B” means the most to Bregman. It represents 4-year-old Brady Columbus, the son of his longtime hitting instructor and close friend, Jason Columbus.

“I love the kid to death,” Bregman says. “Brady’s such a happy kid. He has trouble with some of the social aspects of life, some of the communication skills. But he’s constantly working at it. He’s talking more and more now.

“And he’s always smiling. He can put a smile on anybody’s face. I mean, you talk to him for one minute, and he just lights up the room. Even if you’re just meeting him for the first time, there’s no way you can’t love the kid.”

When Bregman and Brady are together – primarily during the off-season now that Bregman plays for the Astros – the strength and beauty of their bond is seen in simple pleasures.

They watch cartoons together. They do puzzles. They go swimming. Sometimes they just sit together and laugh.

Columbus the dad never really knows who is having more fun – the 23-year-old “kid” who recently completed his second season as a major league ballplayer or the 4-year-old boy who attends autism-specific pre-kindergarten classes in their shared hometown of Albuquerque.

Jason Columbus pulls up a photo he keeps on his phone: a tight shot of Bregman and Brady playfully posing together. Brady’s long blond hair is flowing everywhere. Bright teeth and happy eyes punctuate the faces of both the boy and his godfather.

It is a portrait of joy.

“Pretty cool,” Jason says. “It’s amazing how you can just look at one picture and see the love they have for each other.”

During the past season, Bregman typically FaceTimed with Brady two or three times a week. No matter where Bregman was, no matter what he was experiencing in stadiums across America – hot streak or batting slump – he always got an emotional lift from seeing and talking to his godson.

Bregman had a lot of memorable moments while hitting .284 with 19 home runs and 71 RBIs for the season. He hit his first big-league grand slam – and it was in Yankee Stadium the day the Yankees retired the jersey number 2 of his childhood hero, Derek Jeter. He made numerous big plays in the post-season – none bigger than his extra-inning, walk-off single in Game 5 of the World Series against the Los Angeles Dodgers.

As far as life moments, though, one of Bregman’s favorite highlights came when he got to honor Brady during a late-August series against the Los Angeles Angels. As part of Major League Baseball’s inaugural Players Weekend, each player was allowed to wear a personalized “tribute” patch on the right sleeve of his jersey. Bregman’s carried three words: “Thank you Brady.”

“I did it because I always want him to know the impact he’s made on my life,” Bregman says. “I’m not sure he can really understand that now, but when he’s older, I want him to know about that patch and why I put his name on it.”

Bregman was an LSU freshman – yet to play his first collegiate game – when Brady was born on the third day of 2013. When Jason and his wife, Tish, later learned that their son had autism, Bregman was the first person Jason called with the life-changing news.

Bregman didn’t know much about autism, but he started reading about it. He hoped that he could eventually use the platform of professional baseball to raise both awareness and money for autistic children and their families.

After completing the 2016 season with the Astros, Bregman joined with Jason Columbus and another baseball friend – Jared Koutnik, a former New York Yankees minor leaguer – to develop a plan.

Koutnik was eager to participate because he also has a personal connection: a close friend whose 13-year-old son is both on the autism spectrum and has Down syndrome. The first “A” in AB for AUDS represents that boy, named Aidan, and AUDS is a creative combination of letters: the first two in autism followed by the initials for Down syndrome.

Bregman had already teamed up with Columbus and Koutnik in the promotion of two business ventures: the sale of “Rake City” apparel and the operation of “Rake City” camps for youth baseball players.

With the creation of AB for AUDS, Bregman and his buddies have decided to donate all profits from those “Rake City” businesses to support their non-profit organization.

Plans also include three initial fundraising events. The first will be in Houston sometime during the 2018 baseball season, which will allow other Astros players to attend. Later events will be held in Baton Rouge and in the Chicago area, where Koutnik coaches a prominent travel baseball team and operates the Next Level Training Academy.

The overall goal is clear. As Columbus states it: “We want to do whatever we can to help children with autism, and especially when it comes to education.”

One of the first projects will be donating iPads to school programs that need them.

“It’s pretty amazing what kids with autism can do and learn on iPads,” Columbus says. “We’ve seen it with Brady. But there’s never enough iPads in the schools. They’re expensive. So we want to help with that.”

The way Bregman sees things, the iPads will be only the beginning of something much bigger.

“I want to help as many kids with autism as possible,” he says. “I want everyone to be more aware of autism. And I always want this to be my cause.”

If this sounds unusually intentional for a 23-year-old just finding his way in the world of professional sports, one only has to look at something hanging on a wall in Bregman’s childhood home to understand the way he is already approaching the big-picture arc of his career.

It is a framed black-and-white photo of baseball legend Jackie Robinson sliding into home plate – arms spread, right leg reaching to score a run – and beneath the image are the printed words of his most-traveled quote: “A life is not important except in the impact it has on other lives.”

Bregman’s dad, Sam, long ago put that frame where all three of his children would routinely see it – and the words still play like an echo in the mind of his oldest son.