Tigers Back at PMAC Wednesday vs. UTM 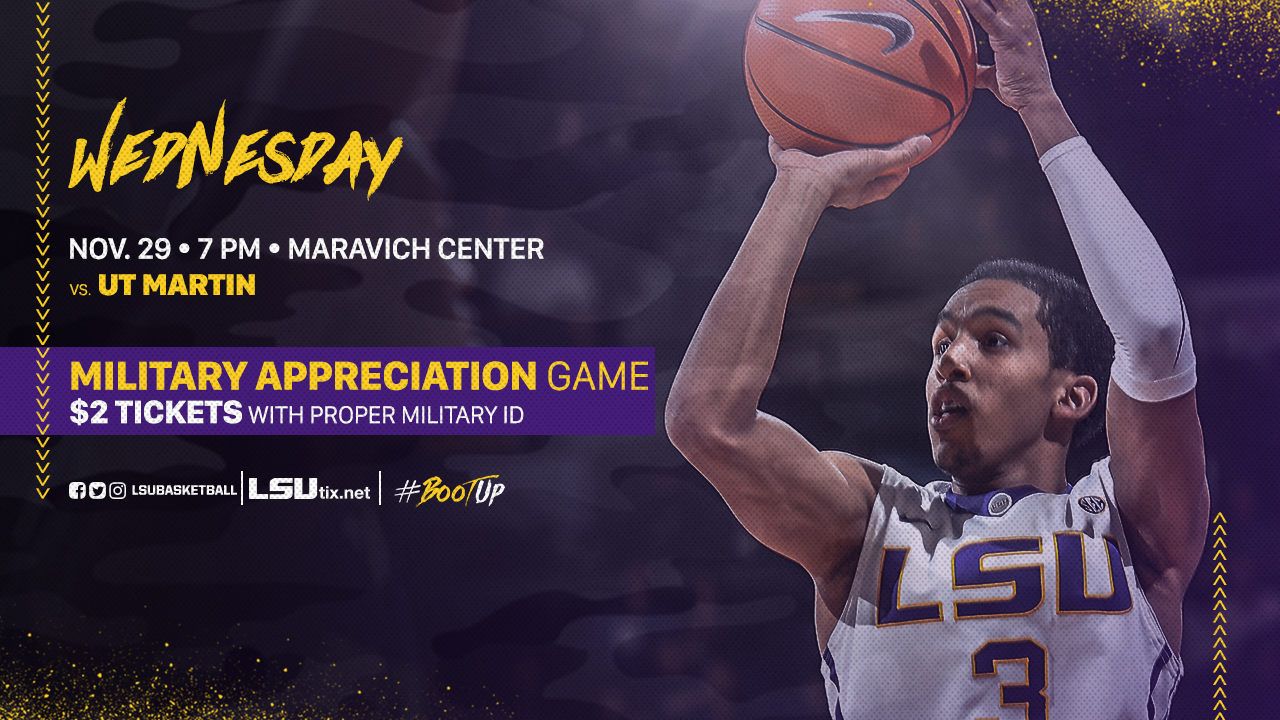 BATON ROUGE – The LSU men’s basketball team, back after its three games at the Maui Jim Maui Invitational, looks to end November on a positive note when the 3-2 Tigers host the 1-5 UT Martin Skyhawks Wednesday night at 7 p.m. at the Pete Maravich Assembly Center.

This will be the final game for LSU before its break for final exam preps and test which lasts through Dec. 9. LSU will not play again until Sunday, Dec. 10, at which time it will play five games at home in 13 days.

TICKETS, PROMOTIONS
Tickets for the game are available online at LSUtix.net and throughout the day Wednesday until 5 p.m. at the LSU Athletics Ticket Office on the first floor of the Athletics Department building. Ticket sales will begin at the PMAC’s upper concourse ticket windows at 5:30 p.m. when doors open.

It is the Military Appreciation game and those with the proper military ID can show their pass at the ticket windows and receive a ticket for the game for just $2.

LSU students are admitted free of charge with a valid student ID and the student lounge will be open from 5:30-6:30 p.m. prior to Wednesday’s game.

ABOUT THE TIGERS
LSU Coach Will Wade admitted in his media session on Monday that a good performance Wednesday would leave a good taste in the team’s mouth heading into the exam break.

“We need to get better,” he said. “We need to leave on a good foot here before we head off into exam break. Really we have six home games here, one at a time. We need to really improve as a team. Get our defense better. We need to get some guys healthy. Our teams have gotten better over Christmas break, traditionally. Our schedule and our plan, we always come out of Christmas break with long winning streaks so we need to make sure we stick to our plan and do the same thing.”

The Tigers defeated Michigan before losing to Notre Dame and Marquette. Offensively, the Tigers are scoring the ball well, ranking eighth in Division I in field goal percentage (.532), but also giving up over 80 points a game meaning a lot of practice prior to the Wednesday contest has centered on defense.

Freshman point guard Tremont Waters averaged 22.7 points in Maui in earning all-tournament honors and that was highlighted by the 39 points in the Marquette game. For the five games, Waters is averaging 20.0 points and 5.2 assists.

Forward Duop Reath is also averaging in double figures at 11.4 points per game.

ABOUT THE SKYHAWKS
For the University of Tennessee at Martin, the game with LSU is their second in Baton Rouge in a week. The Skyhawks were in Baton Rouge on Nov. 22 at the F. G. Clarke Activity Center, losing to Southern University, 69-66. It’s part of a three-game current losing streak for UTM that has the Skyhawks at 1-5.

RADIO & STREAMING VIDEO
The game will be broadcast on the LSU Sports Radio Network affiliates with the Voice of the Tigers Chris Blair joined by former LSU basketball coach John Brady (Eagle 98.1 FM in Baton Rouge). Video streaming of the game will be available on the SEC Network + with Lyn Rollins and Victor Howell on the ESPN app.