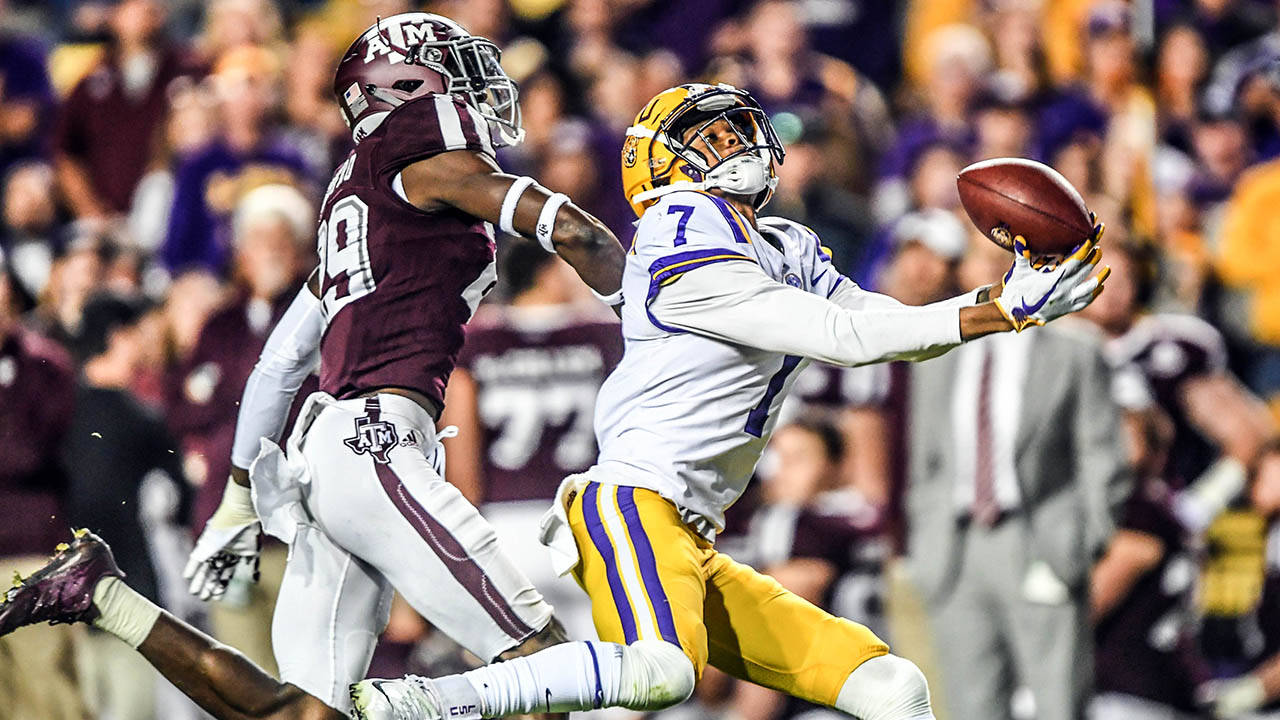 Etling, who transferred from Purdue for his final two seasons of eligibility, was 19-of-30 passing and set career-bests at LSU with 347 yards and three touchdowns. He became the fifth quarterback in LSU history with 2,000 yards in consecutive seasons.

Williams had 12 carries with 106 rushing yards – including a career-long 77-yard run – and scored a touchdown, while Chark led the Tigers with five catchees for 86 yards and a touchdown.

Junior Derrius Guice moved into fifth place on the LSU career rushing list (2,976) with 28 carries for 127 yards and a touchdown.

Meanwhile, the Tigers defense held the high-powered Aggies to 282 yards of total offense including only 55 on the ground.

Starkel was 16-of-30 passing for 227 yards and two touchdowns. Christan Kirk was his leading target with seven catches for 78 yards and a score.

Though the Tigers fumbled on the first play from scrimmage, the LSU defense forced four turnovers that led to 13 points.

After the teams traded turnovers on their opening possessions, LSU drove 59 yards on nine plays to take a 3-0 lead when Jack Gonsoulin nailed a 46-yard field goal – the longest of his career – at the 9:52 mark of the first quarter.

During the scoring drive, LSU running back Derrius Guice moved past Harvey Williams (2,860 yards, 1986-90) into fifth place on the Tigers’ all-time rushing list.

On ensuing possession, LSU linebacker Donnie Alexander recovered a fumble by Texas A&M’s Keith Ford and returned it to the Aggie 23-yard line. The Tigers converted the turnover into points when Gonsoulin hit a 33-yard field goal with 6:27 remaining in the first period, stretching the LSU advantage to 6-0.

The Tigers extended the lead to 13-0 when quarterback Danny Etling connected with Russell Gage on an 11-yard touchdown pass with 4:23 left in the first quarter. The TD culminated a four-play, 61-yard drive that started with a 49-yard completion from Etling to wide receiver DJ Chark to the Texas A&M 12-yard line.

LSU had an opportunity to add to its lead early in the second quarter, but Gonsoulin was wide left on a 26-yard field goal attempt with 11:31 remaining prior to halftime.

After the Tigers held the Texas A&M offense to its third consecutive three-and-out possession, LSU moved 76 yards on seven plays and grabbed a 20-0 lead with 7:29 left before halftime on Darrel Williams‘ one-yard dive into the end zone. The march was highlighted by a 56-yard pass from Etling to Williams that advanced the football to the Aggie 19-yard line.

The Aggies narrowed the gap to 20-7 with 21 seconds remaining in the second period when Trayveon Williams scored a on two-yard run, capping an eight-play, 70-yard drive.

Texas A&M struck quickly to begin the third quarter, driving 75 yards on five plays and scoring on a 45-yard pass from quarterback Nick Starkel to wide receiver Damion Ratley, reducing the margin to 20-14.

LSU forced its third turnover of the contest at the 11:38 mark of the third quarter when cornerback Donte Jackson intercepted Starkel at the Texas A&M 39-yard line. The pick was Jackson’s first of the season and the fourth of the junior’s career.

The Tigers capitalized on the turnover, marching 39 yards in seven plays with Guice crossing the goal line on a one-yard burst at the 8:52 mark of the third quarter. The key play in the drive was a 27-yard pass from Etling to freshman running back Clyde Edwards-Helaire.

The Aggies responded with 5:21 remaining in the third quarter when Starkel hit Christian Kirk with a 10-yard scoring pass, culminating a 10-play, 75-yard drive and reducing LSU’s lead to 27-21.

LSU roared back, shredding the Aggie defense for 71 yards on five plays, as Etling fired a 10-yard TD strike to senior tight end John David Moore, his second career touchdown reception. The score gave the Tigers a 34-21 lead with 2:51 left in the third quarter.

The Tigers increased the margin to 42-21 with 13:18 remaining in the game when Etling fired a six-yard scoring pass to Chark, capping a five-play, 83-yard drive that was ignited by a 77-yard sprint by Williams to the Aggie six-yard line. The Tigers converted on a try for two points, as Etling hit tight end Foster Moreau with a shovel pass to give LSU the 21-point advantage with 13:18 left in the contest.

With a nine-play, 67-yard drive that included a targeting ejection by Texas A&M’s Derrick Tucker against Guice, LSU added a 26-yard field goal by Culp that extended the advantage to 45-21 with 7:53 to play.