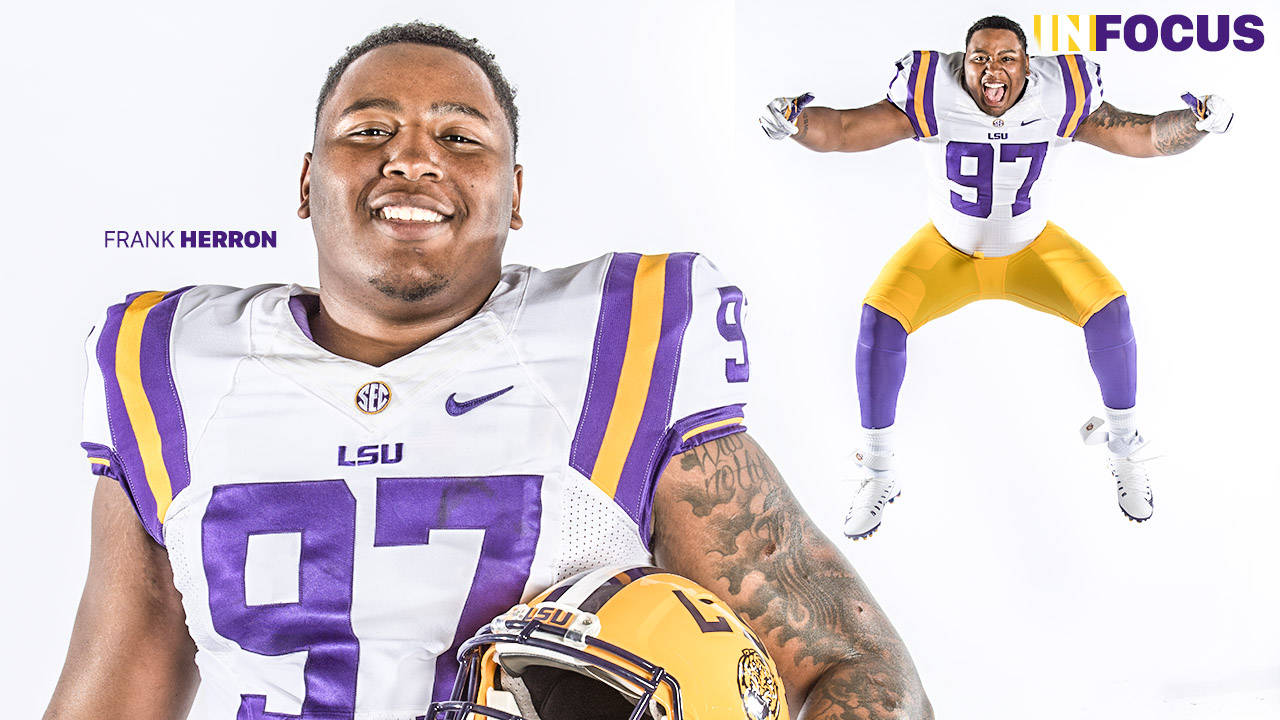 In the world of sports, you play how you practice, and it’s no different for LSU defensive tackle Frank Herron.

It’s not easy then finding yourself on the sideline during practice. No practice equals no play. That’s how it was for Herron when this season began as he had to miss the first six games.

A fifth-year senior, Herron explained that being off the field can be tough, but when you have supportive teammates around you, it helps a lot.

The desire to get out there still burned and he was able to make his season debut against Auburn, a game in which the Tigers overcame a nine-point halftime deficit to gain the 27-23 victory. The defense held Auburn scoreless in the second half. It helped to have a fresh Frank Herron to rotate in.

With fresh legs, Herron has been able to bring the energy to a team which is 4-1 since his return.

“I feel like it’s my job to pick up the energy, keep guys going,” explained Herron. “Go in there and make a big play, get everybody fired up. I feel like that’s who I am.”

In August, Herron also became a graduate when he received his LSU degree in interdisciplinary studies. A father of two daughters, he’s the first in his immediate family to graduate from college.

“That’s probably one of the biggest accomplishments of my life,” said Herron. “I set a foundation for my family.”

When his playing days are over, Herron wants to be a high school football coach. He wants to help young men develop from high school boys into university men and show them what college football will be like. Coaching high school will also give him time to spend with his family.

That’s the future, and although his time at LSU may be limited, it’s not over. Herron has come a long way since his early days as a Tiger. He’s grown up at LSU.

“I feel like these past five years I became more of myself,” explained Herron. “I became a better student. I graduated. I became a father. I’m a better person because of LSU.”

He’s also become a better football player. According to defensive line coach Pete Jenkins, Herron was inconsistent a year ago.

“He’s really focused on it and I think with him working that hard to become consistent, it’s shown up for him,” said Jenkins.

Jenkins has plenty of experience to know what consistency looks like. This is his third stint with the Tigers. His first stint began over 35 years ago in 1980.

“Coach Pete has been a big help on and off the field,” said Herron. “I go to talk to coach Pete all the time. He just knows the ins and outs of the game. He’s not going to sugarcoat you. He will tell you what it is and what you’ve got to do.”

The one thing that Jenkins says turned Herron into a more consistent player is practicing with a purpose instead of just putting in time.

“He’s identified that, and he works really hard with his skills to become more consistent in the things he’s done on the field,” said Jenkins.

Herron spends a lot of time in the film room with Jenkins, too.

“We got a lot of film. He talks about (1980s LSU defensive lineman) Tommy Clapp, he loves that guy,” said Herron of Jenkins. “He has a lot of great guys that he shows.”

Jenkins says that Herron is smart in the film room and that he sees things to work on.

“One of the things that you know is that when he makes a mistake, he identifies it himself,” Jenkins explained. “You know he has an understanding because he can correct himself.”

The film room is a great place to make observations, but missing time earlier this year also provided new light into how Herron sees the field. The old ball coach, Jenkins, believes it all starts with practice.

“Frank told me the other day that he sees the game a little different than he used to see it,” Jenkins said. “I think he’s become more purposeful in the things he does. His practice habits now are just great. I love the way he approaches practice.”
As Herron has continued to practice hard, it has shown every week on the field. Since his season debut against Auburn, he has steadily improved his stats week to week. His best game thus far came two weeks ago against Arkansas, when he recorded seven tackles and forced a fumble.

He hasn’t reached his ceiling yet, either.

“Even though he’s playing well, he’s capable of getting better if he continues to work and he keeps doing the things that we talk about,” said Jenkins.

Practice is the name of the game, and Herron has put in his due diligence on and off the field, and it has transformed him into who he is today.

“I’ll miss everything from the hard times to the good times,” said Herron. “If I had to choose again, I would not change going to LSU for the world.”