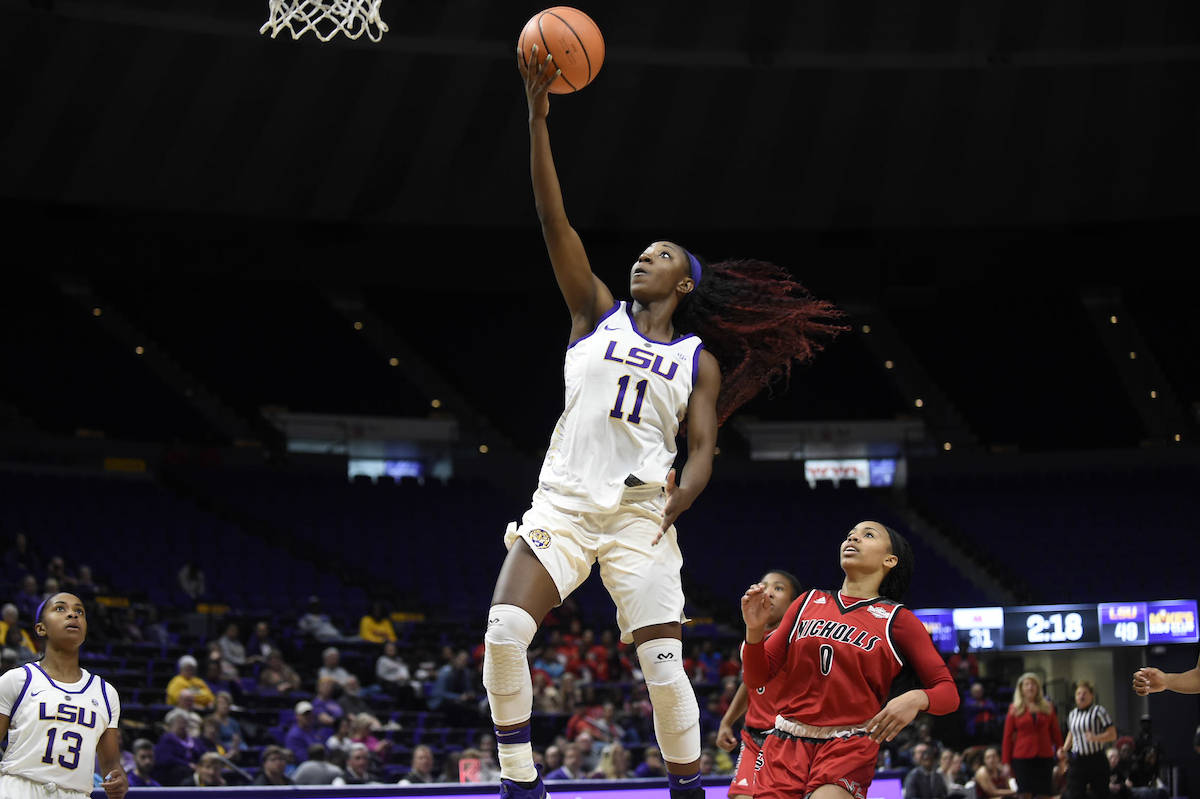 BATON ROUGE – The LSU women’s basketball team picked up its second home victory of the season over the Nicholls State Colonels by a score of 65-50 at the Pete Maravich Assembly Center on Tuesday.

LSU improved to 2-2 on the season and 12-0 all-time against Nicholls, and head coach Nikki Fargas improved to 16-4 against Louisiana schools during her tenure.

Ayana Mitchell had another strong performance with 12 points to go along with three rebounds and a steal, while Chloe Jackson tallied ten points, four rebounds, two assists and three steals.

LSU limited the Nicholls offense to just 21 points in the first half by protecting the rim and allowing just ten points in the paint. Outside of giving up a trio of early three-pointers, the Lady Tigers’ defense held the Colonels in check, forcing 11 first-half turnovers.

A breakout effort from freshman Faustine Aifuwa to kick off the second half increased LSU’s lead to as many as 23 points thanks to Aifuwa’s ten points and four rebounds in the third quarter alone.

Down 54-33 to end the third quarter, the Colonels put up a resilient effort in the fourth, outscoring LSU 17-11, but the Lady Tigers never released their grip on the double-digit lead and easily closed the game out on an 8-2 run to secure the win.

Nicholls attempted 21 shots from beyond the arc, but the Lady Tigers did a good job of keeping the pressure on and closing in on the long ball as the Colonels converted on just four of those 21 attempts.

The Lady Tigers forced 17 turnovers over the course of the game and converted them into 15 points and did a good job of protecting the ball, only allowing Nicholls to score seven points off of miscues.

The LSU bench was a strong suit once again, outscoring the Colonels’ reserves 19-4 as nine different Lady Tigers put point on the board.

Freshmen Khayla Pointer and Raven Farley earned the first starts of their LSU careers tonight. It is the first time two rookies have started a game for LSU since Dec. 19, 2014 against UC Santa Barbara (Jenna Deemer and Stephanie Amichia).

The Lady Tigers will travel to Las Vegas to compete in the South Point Thanksgiving Shootout starting on Friday, Nov. 24 when they take on No. 2 Texas at 5:30 p.m. CT followed by a matchup with Saint Louis on Saturday, Nov. 25 at 10 p.m. CT.