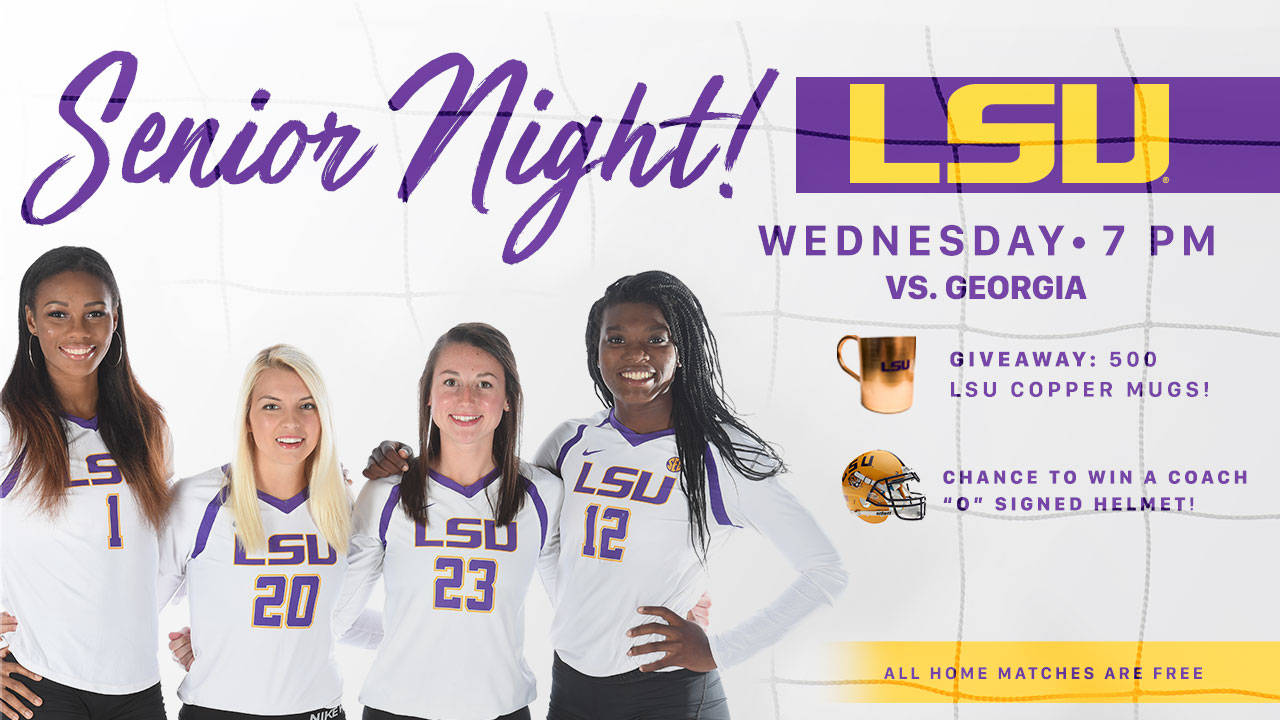 The matchup will air live on SEC Network+. Fans can access the match online through WatchESPN.com and the app. Lyn Rollins and Yvette Girouard will be on the call.

Fran’s Final Thoughts
“Georgia is a much improved team and we need to be ready for battle. We are also excited to celebrate our seniors. They have been an amazing group and have had a great impact on our program on the court, in the classroom and in the community.”

Promotions
In the final regular season home match, LSU volleyball will honor the 2017 Senior class in Khourtni Fears, Gina Tillis, Kelly Quinn and Cheyenne Wood. The senior class presentations will be held after the match. The first 500 fans in attendance will receive an exclusive LSU copper mug. Fans can also enter to win a Coach O signed helmet.

Last Time Out
LSU dropped its last match, falling on the road to Alabama in four sets by scores of 25-15, 14-25, 23-25 and 17-25. Freshman Taylor Bannister led the Tigers offensively with a match-high 19 kills. Senior Gina Tillis recorded her 11 double-double on the year and 27th in her career with 11 kills and 14 digs. Junior Toni Rodriguez added 11 kills while junior Lindsay Flory tallied 14 digs. Freshman Raigen Cianciulli anchored the back row with a match-high 23 digs.

A Look at Georgia
Georgia comes into the Wednesday match with a 19-10 record and a 9-7 record in the SEC. The Bulldogs sit right behind LSU in the SEC standings. The Bulldogs have won four out of their last five matches and are coming off a 3-0 sweep of Tennessee on Sunday. T’ara Ceasar leads the way for the Bulldogs offensively, tallying 412 kills on the year, averaging 4.20 per set with a .259 hitting percentage. Meghan Donovan directs the offense with 11.02 assists per set. Kendall Glover anchors the back row with 3.46 digs per set for a total of 332 on the year. The Bulldogs are averaging 13.7 kills per set with a .247 hitting percentage. They hold their opponents to a .206 hitting mark. They average 12.9 assists per set to go along with 13.8 digs per set and 1.81 blocks per set.

>> With a win on Wednesday, the Tigers would improve to 20-8 on the year which would be the first 20-win season since 2014. It would also be Fran Flory‘s seventh year with 20 or more wins.

>> Anna Zwiebel is sixth among the SEC in assists at 9.92 per set. Jacqui Armer is fourth in the league in blocks per set at 1.27. Raigen Cianciulli is averaging 4.34 digs per set which is tied for sixth-best in the SEC.