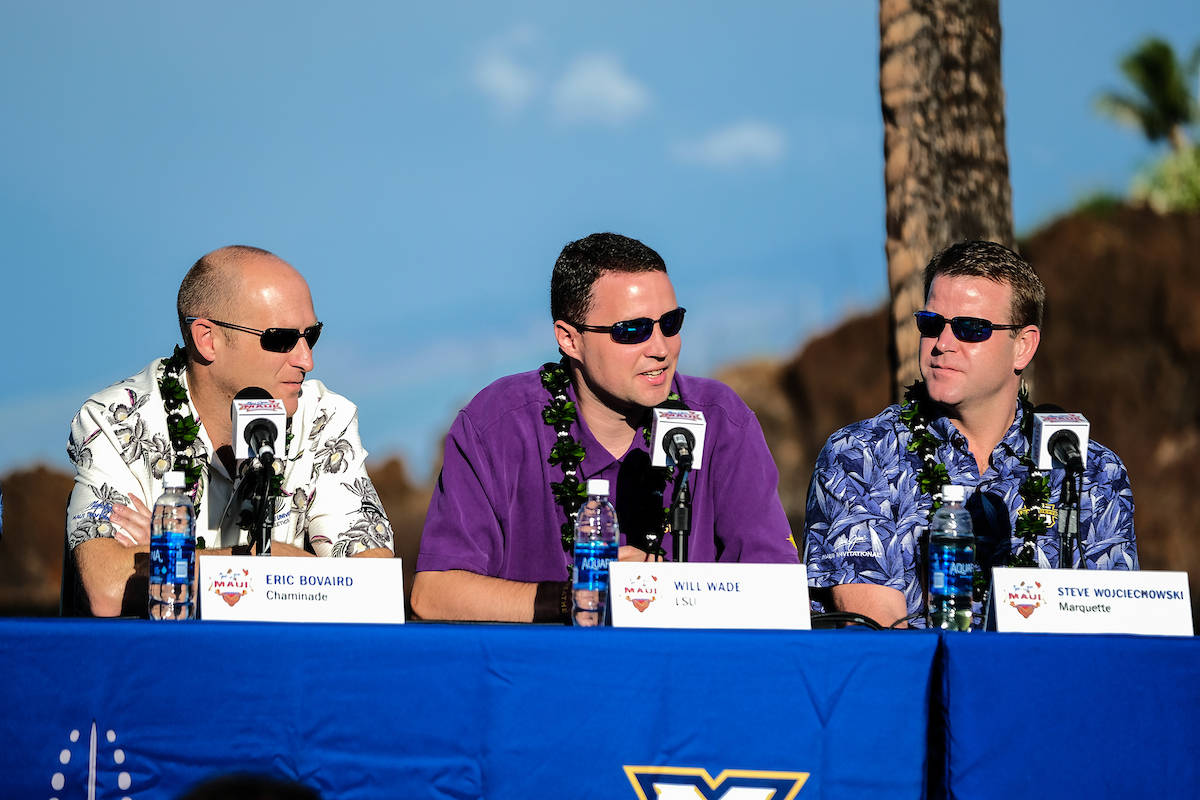 LAHAINA, Maui – It is almost time for the LSU Basketball team to get down to business as play begins Monday in the annual Maui Jim Maui Invitational at the iconic 2,400-seat Lahaina Civic Center.

Four games are scheduled on Monday with the LSU Tigers playing the final game of the first day in prime Hawaii time at 6:30 p.m. (10:30 p.m. BR time) against the University of Michigan. The game will be broadcast on the affiliates of the LSU Sports Radio Network (Eagle 98.1 FM in Baton Rouge) with the “Voice” of the Tigers Chris Blair and former LSU basketball coach John Brady.

The game will be televised on ESPNU with Kanoa Leahey and Dan Dakich on the call. Chaminade and Notre Dame play before LSU-Michigan at 4 p.m. also on ESPNU. The other bracket will play earlier in the day on ESPN2 with Dan Shulman and Jay Bilas on the call. Marquette will meet VCU at 9:30 a.m. Hawaii time and that will be followed by Wichita State and California.

Sunday, the head coaches met with the media at an early morning outdoor event emceed by Shulman and then took part in the annual free throw shooting contest with kids from middle schools in the area.

“We are a major work in progress,” Coach Will Wade of LSU told the audience. “Offensively, I think I know what we have, but we are a work in progress when it comes to our defense. We are a team that is coming together and hopefully this week will help us to jell and get better.”

“It will be good for us to see where we stand,” the first-year LSU mentor said. “It will give us about six weeks before we have to get into SEC play. It will tell us where we stand, what we need to correct and what we need to get better on. We are anxious about the opportunity and ready to get it started (Monday).”

Coach Jim Beilein of Michigan is in his 40th season overall as head coach and 11th at Michigan with 769 total wins and 218 at Michigan.

“I think we are in a transition right now where we lost so much last year,” Beilein said. “We have some good young players but now they are going to get to do it on the big stage. There is no stage bigger really, accept the NCAA Tournament, than this tipoff tournament. We’ll see what they do when the lights come on and if they can’t get it done right, we will eventually do it. This is a great test.”

Shulman asked Beilein about Mo Wagner, the junior from Berlin who flirted with the NBA draft last year.

“Mo is one of the finest young men I’ve ever coached …” said Beilein. “He’s just a great personality. He loves to win. He loves basketball. He’s very young (20-year-old junior). He’s a pleasure to see every day. He has a tremendous upside.”

Michigan dominated the second half to erase a one-point halftime deficit and earn a 61-47 win over Southern Miss. Muhammad-Ali Abdur-Rahkman led the Wolverines with 14 as Duncan Robinson and Wagner scored 12 each and Jon Teske 10. Teske also had 11 rebounds en route to his first career double-double.

UPDATE – 6:20 p.m. HST
The Tigers were one of the final teams to finish up their second day of practice, this time on top of the mountain where Lahainaluna High School is located overlooking a school football stadium on a plateau below with the Pacific Ocean in the distance.

“Everything matters” was one of the themes that Coach Wade put out to his team in the two-hour workout at the high school gym.

The team then attended the coaches’ event at another of the host hotels where all the coaches take part in a round table discussion heading into the tournament.