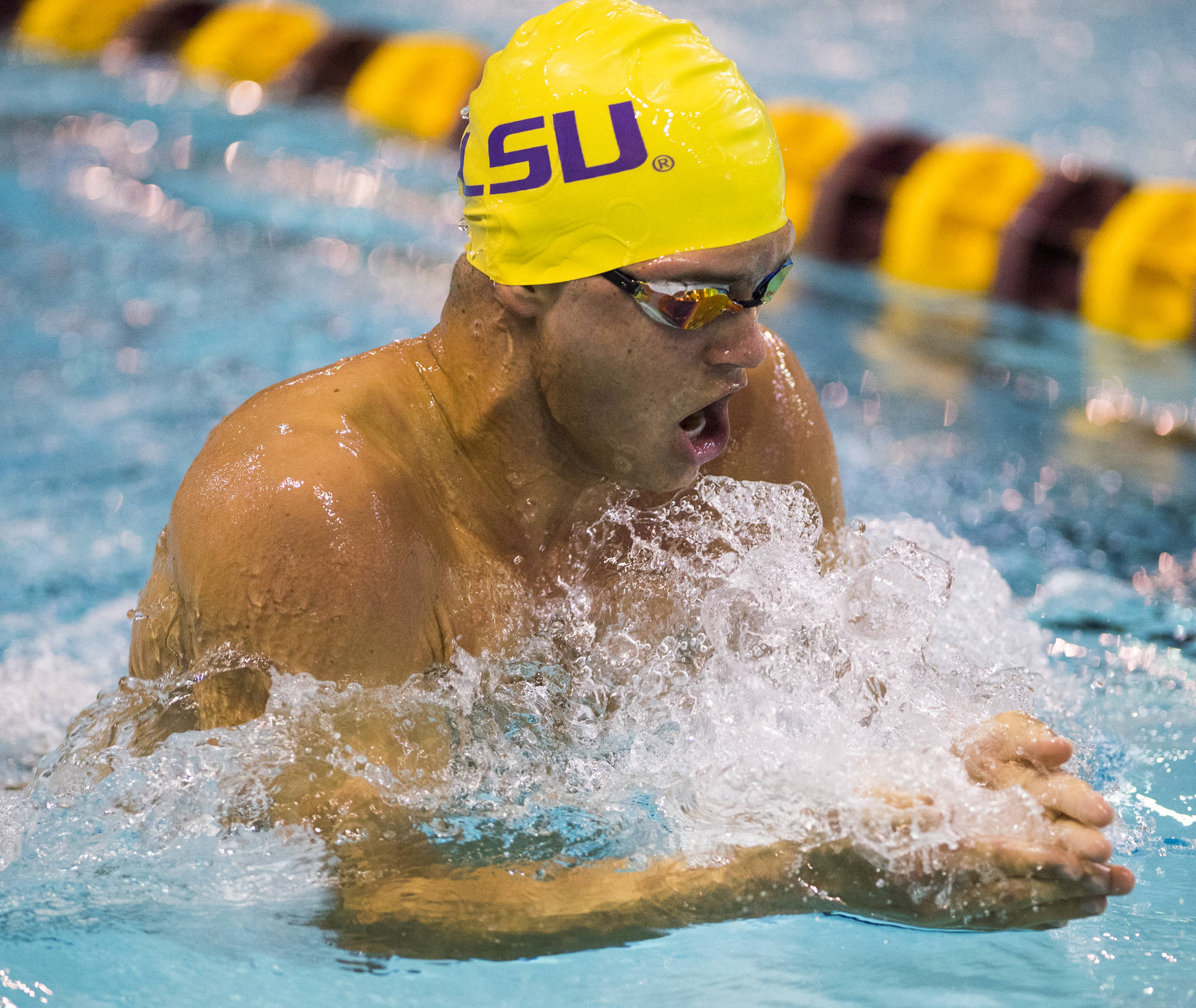 COLLEGE STATION, Texas – On the last day of competition at the Art Adamson Invitational, the LSU swimming and diving team managed to get four into the top eight in the diving well, and garnered a slew of NCAA B-cut times in the pool. Overall, the men finished third out of eight teams with a score of 569.50 points, and the women finished seventh out of 10 teams, earning a total score of 224 points.

The diving team ended the meet with the platform event. All four male divers finished in the top eight of the 15-man field. LSU head diving coach Doug Shaffer was pleased with the performance of his team from top to bottom.

“The men did great,” said Shaffer. “We train for three events, but because of the timing and where we are in the season, we’ve not been able to develop as much on platform, so to put four in the top eight, was great. We do this as a trial for later on in the season. After three long days at the pool, we were tired. We worked hard this week coming into the meet, and it showed today.”

Juan Celaya-Hernandez‘s unbeaten season came to an end after scoring a 362.30 and taking silver in the event. Regardless, Celaya-Hernandez blasted the NCAA Zones qualifying score by 62.30 points.

“Every day is different,” explained Shaffer. “Our emphasis is in February and March. He’s still undefeated in both springboards and dual-meet competition. He’s not down. That’s the nature of Juan and our team. We’re not afraid to get beat. It makes you stronger and pushes you further.”

“He’s getting better, but he’s not diving to his potential,” noted Shaffer. “Matt needs to be urgent and on point because he could be competing to win that event. Hopefully this is a good gauge for him moving forward.”

Matthew McClellan and Dakota Hurbis took sixth and eighth, respectively. McClellan also qualified for Zones with a score of 302.20. Hurbis scored a personal-best 293.25.

“Today was good for Matt McClellan‘s development on platform. We did some new dives, and that’s what this (meet is) for. We’ll do more in December and January as we prepare for the SEC Championships and NCAA Zones. Dakota’s brand new up there. That’s his personal best. We did four new dives, so it was a good starting point for him.”

On the women’s side, junior Rileigh Knox did not compete in the platform event.

For the swimmers, the highlight of the night was the seven competitors who achieved NCAA B-cut times in their respective events. Of the seven, four were women and three were men.

“The morning summarized it all,” said swimming head coach Dave Geyer. “We were all over the place. We had the women come out firing in the 200 back, posting lifetime bests and got into some scoring heats. After that, it was obviously a little frustrating going a good bit faster at night. Some of those times would’ve put us in scoring heats tonight and the team results would’ve been a little bit better. Overall, some of our athletes were able to make great adjustments and put things together tonight.”

Three of the women got their times in the first event of the day, the 200 backstroke, where Cassie Kalisz, Ellie Baldwin, and Alexandria Ham all got B-cut times. In the finals, Kalisz and Baldwin took 14th and 15th overall in the B-Final, touching the wall at 1:58.40 and 1:58.69. Ham took third in the C-Final and 19th overall, posting a time of 1:58.62. All three times were lifetime bests.

“They started warming up with a purpose this morning,” Geyer said. “When that happens, you swim fast. It’s not rocket science.”

For the men, the best individual finish belonged to freshman Luca Pfyffer, taking sixth overall in the 200 breast with a personal best of 1:58.83. Fellow freshman Cameron Karkoska won his finals race as well. Karkoska finished with a time of 2:01.63 to win the C-Final, and Jeff Snoddy won the D-Final, touching the wall at 2:05.46.

“Jeff’s a bit of a project for us this year, so seeing him adjust in the 200 breast was good. Cameron was a little off this morning, but came back strong. Luca did well to squeak into that A-final and dropped a little bit of time, but if you want to do anything at the SEC Championships, you have to swim faster.”

After two top-10 finishes in the team rankings, Geyer is ready to move forward and start preparing for the SEC Championships in February.

“At this point, we’ve got two options really,” Geyer explained. “Either we’re satisfied, and we stick to the plan and move forward, or we’re not satisfied, and we still stick to the plan and move forward. It’s the middle of the season, so it’s never easy to judge where other programs are at. We know what we’re shooting for, so we’re moving forward on Monday afternoon.”