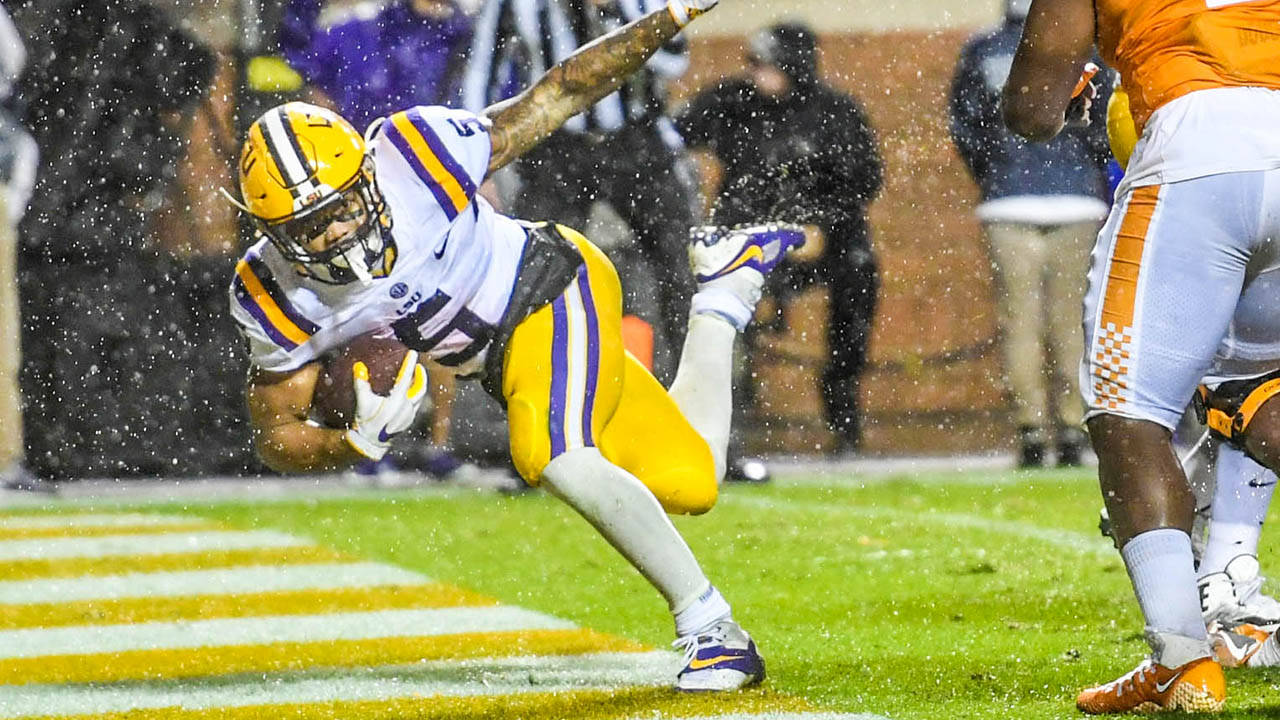 BATON ROUGE — No. 20 LSU had two takeaways on special teams and forced three turnovers on downs, as the Tigers survived a monsoon on Rocky Top to beat Tennessee, 30-10.

Meanwhile, Derrius Guice passed 1,000 rushing yards in the contest one play after quarterback Danny Etling passed 4,000 for his LSU career.

Guice, who had 97 yards on 24 carries, earned LSU’s 18th 1,000-yard season and became the fifth Tiger with multiple seasons of 1,000 rushing yards. His 3-yard touchdown in the third quarter was the 10th of the season, making him the seventh Tiger with 10-plus TD’s in multiple seasons.

Behind Guice, Darrel Williams had 68 yards on only seven carries with touchdown runs of 10 and 6 yards.

Etling took advantage of limited opportunities to throw due to the weather, as the senior completed 11-of-15 passes for 81 yards in a crazy swirling wind. He also rushed nine times for 42 yards including a 13-yard touchdown run that extended LSU’s advantage to 17-3 in the second quarter.

Tennessee quarterback Jarrett Guarantano was 13-for-23 passing for 239 yards with a touchdown. John Kelly had 24 rushes for only 43 net yards with a 9-yard long.

The Vols muffed two punts that led to 10 LSU points, as LSU punter Zach Von Rosenberg played admirably in the difficult wind. He punted five times for a 49.2 average with a career-best 60-yard effort and three inside the 20.

With a cold front bringing a stiff breeze out of the south-southwest to open the contest, Tennessee won the toss and elected to kickoff to LSU with the wind to its back to start the game.

Though neither team managed a first down on the first four drives of the contest, the Tigers took advantage of a muffed punt at the Tennessee 15-yard line to gain a 3-0 lead with 6:38 left in the quarter.

LSU punter Zach Von Rosenberg hoisted a 47-yard effort toward the right sideline, where Tennessee’s Marquez Callaway muffed the fair catch and Russell Gage was on the spot to recover.

A third-down reception by Guice in the right flat went for minus-4 yards, leading to Connor Culp‘s 30-yard field goal.

On the ensuing drive, Tennessee converted a fourth-and-1 from its 49 – which was overturned on video review – to keep its drive alive. LSU’s defense put the brakes on the Vols at the LSU 27 and Aaron Medley knocked in a 45-yard field goal that tied the game at 3-3 with 13:59 left in the first half.

Though a sack of Etling ended LSU’s next drive, another terrific punt by Von Rosenberg was again muffed by Callaway at the Vols 27 and recovered by Michael Divinity Jr. at the 19.

On third-and-1 from the 10, Darrel Williams came in motion from the f-back position on the left and ran untouched into the endzone. LSU led 10-3 with 11:31 left in the half.

Tennessee responded with an 11-play drive, but came up empty when Medley’s 46-yard field goal attempt was wide to the left.

Both LSU and Tennessee punted on the following drives, however, Von Rosenberg’s career-best 60-yard effort flipped the field and was downed at the Vols 5.

Following a three-and-out by Tennessee, Etling completed a 12-yard pass to Derrick Dillon to the Vols 49. Williams rolled along the left sideline for 36 yards to the Tennessee 13, setting up Etling’s keeper for a touchdown on the next play.

Tennessee answered the LSU score with a 55-second scoring drive, as Guarantano completed passes for 26 and 46 yards to Callaway, the latter for a touchdown with 1:23 to play in the half.

Etling and the Tigers’ attempt to put points on the board before the half came up just short. After Guice gained a first down rushing, Etling completed passes of 16 yards to Gage and seven to Chark, giving Culp a shot at a 53-yard field goal that banged off the right upright as time expired in the half.

With monsoon-like wind and rain at halftime and into the opening minutes of the third quarter, LSU’s kickoff was mishandled by Callaway at the Tennessee 3. The Vols weren’t able to advance past the original line of scrimmage and punted from the endzone to midfield.

In the pouring rain, LSU ran nine-straight times, culminating with a 3-yard touchdown by Guice with 7:26 left in the quarter. Guice’s 28th career rushing touchdown put him in a tie for eighth place on LSU’s career list, and LSU led 23-10 following a missed PAT.

After consecutive punts in the wet conditions, Tennessee took a gamble with a fourth-and-1 QB sneak that was stuffed by LSU safety Grant Delpit at the Vols 21.

A 15-yard pass to Williams setup the running back’s 6-yard touchdown run, his second of the night.

Tennessee answered with a 60-yard pass to Jeff George to the LSU 14, but for the second-consecutive time the Tigers defense got off the field with a fourth-down stop at the Tigers 11.

With 24 carries tonight, @DhaSickest has 1,026 yards this season an joins this elite list of LSU rushers! pic.twitter.com/7156yVquYa

DERRIUS GUICE! He hits the 1,000 mark for the second consecutive season and joins the likes of Alexander, Faulk, Fournette and Hilliard with back-to-back 1,000 yard seasons and 10 rushing touchdowns. pic.twitter.com/wGkLiYZc25

DANNY ETLING! With that 10-yard pass to Guice, the senior now has over 4,000 career passing yards at #LSU! pic.twitter.com/LwE3XKpnkn