Lowe In Maui: Practice To Get Better 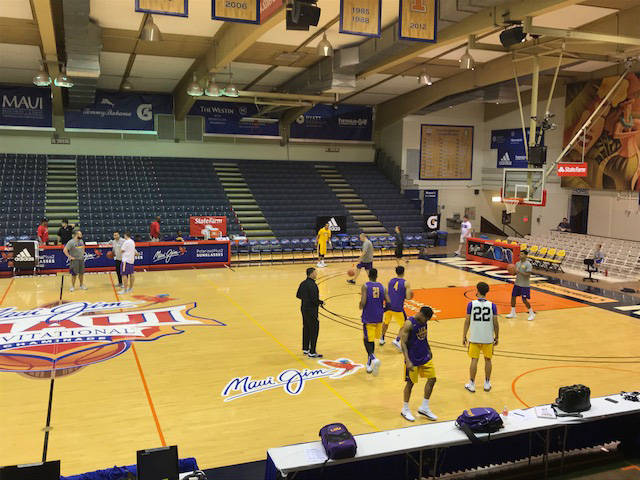 LAHAINA, Maui – Okay, if I take a little breather on this Saturday and enjoy my Aloha Maid Pineapple/Orange Nectar?

Back at the Maui Jim Maui Invitational for the fourth time and just back from a two-hour practice at the iconic Lahaina Civic Center where the games are played. It’s been ten years since I’ve been here, but certainly the people have tried to find whatever space they can outside for tents and hospitality areas. But inside the 2,400 seat arena where one of the great preseason tournament is held every year is still wonderfully the same.

Maybe you can thank someone like coaching veteran Dave Odom who is the man in charge of making sure this tournament continues to be the great event it has become. Odom continues to be the one that makes sure each year’s field is amazingly good and it doesn’t help the last few years that Maui Jim Sunglasses is a part of the event as the title sponsor.

Now if you were wondering if a Will Wade practice looks the same at home as away, I would probably have to say, yea probably so. It was two hours of very intense work and transition defense was a topic that had to be on the minds of players as coaches tried to drill that in during full court drills for a lengthy part of the session.

There will be one more practice on Sunday, this time at Lahaina HS, the spot where strength coach Greg Goldin made sure and have a weight workout earlier in the day. That practice won’t come until late in the afternoon Sunday Hawaii time.

Then Monday it all begins on the ESPN family of networks. The last quarterfinal of the first day will match the Tigers (2-0) and the Michigan Wolverines (3-0). That game will tip at 6:30 p.m. Hawaii time and 10:30 p.m. back in Baton Rouge. LSU will look to continue the offense it has shown, but Coach Wade will be looking for a little more defense from his squad.

What you have to like is that despite the intensity, despite the grind, the players are all slapping hands, helping each other up on the always slipper Lahaina surface and working hard to improve.

Saturday night, the players’ luau allowed the combatants to have a good meal and be fitted with their official Maui Jim sunglasses. Sunday activities start early here with what is a noon Baton Rouge time (8 a.m. here on the island) press conference that Dan Shulman will host and then a charity free throw shooting contest in which the coaches will join local youngsters in shooting free throws for funds.

Hopefully, Coach Wade will have the same touch as his team did on Thursday when they made 19-of-20 free shots.

Of course, we will have a report from that and more Sunday as the clock continues to count down to the annual Maui Jim Maui Invitational. Now back to my Pineapple/Orange nectar. Not sure how I feel about this, can I get a big glass of ice tea instead? Have a good evening from Maui.