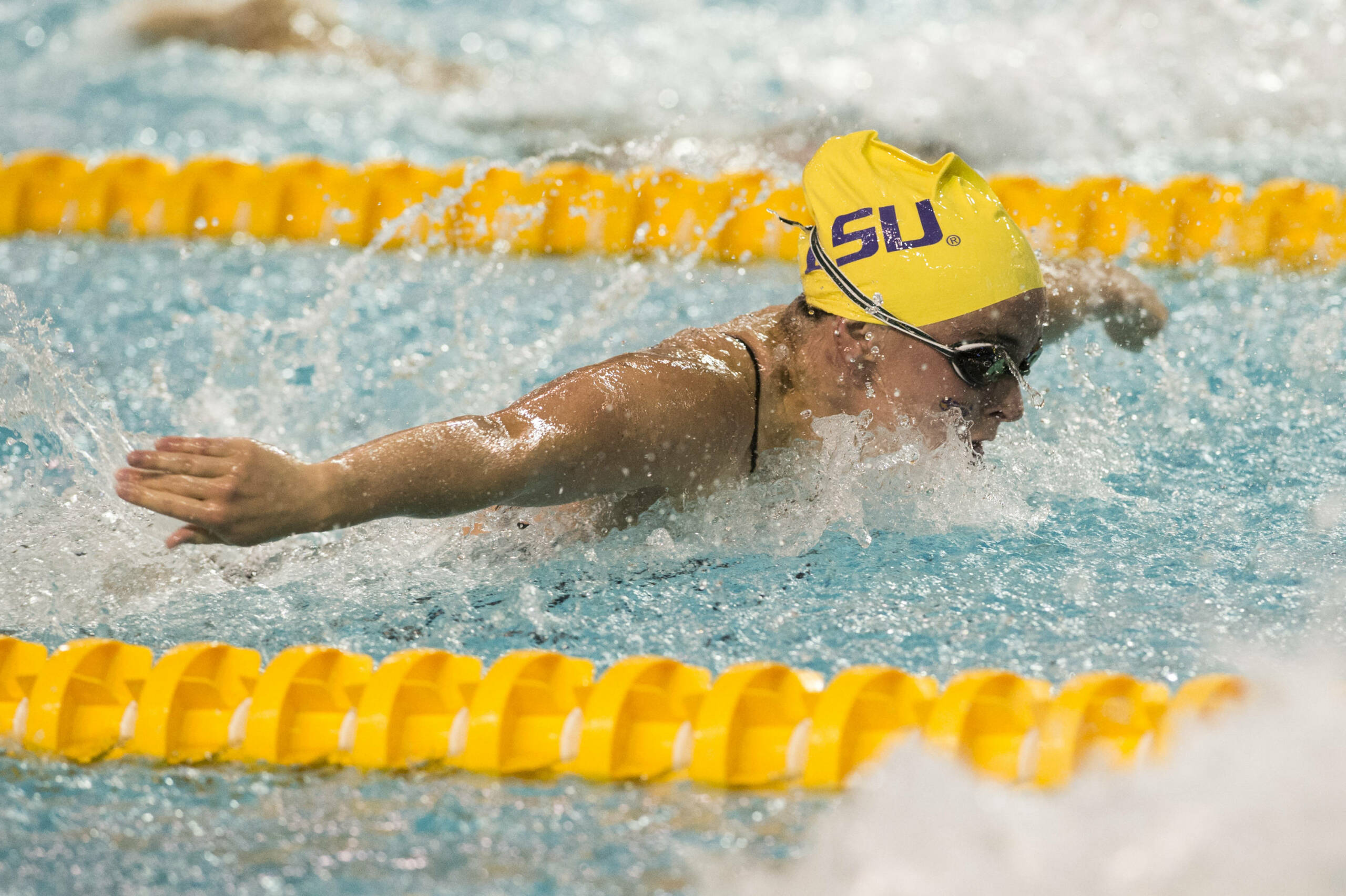 College Station, Texas – The LSU swimming and diving team put in solid performances across the board Friday at the Rec Center Natatorium on day two of the Art Adamson Invitational. The men are in third place with a score of 420.5, and the women are fourth with a score of 184.

Men’s diving had one of its best performances of the season today in the three-meter springboard event, with Juan Celaya-Hernandez, Matt McClellan, and Dakota Hurbis all making it into the eight-man finals.

In the process, freshman Dakota Hurbis qualified for NCAA Zones for the first time this season, posting a score of 325.30 in the preliminary round.

“Today was a great day, putting in three guys in the finals,” explained diving head coach Doug Shaffer. “Dakota got his NCAA Zones score, so we’re all qualified there. It was more about a consistent list under his belt, and getting the Zones score. We did both of those today, and just happened to lead us to a berth in the final. We’ll rest tonight, then hit it for one more day.”

In the finals, sophomore Juan Celaya-Hernandez kept his undefeated season going with a victory in the men’s three-meter final. Celaya-Hernandez scored a 459.20, winning by a substantial margin of 48.40 points.

“Juan got his second win of the event, so he still has the undefeated streak in both preliminaries and finals,” said Shaffer. “He also holds the highest point totals for competitors in the SEC in one-meter and three-meter right now. He loves to compete, and he’s just focused on reaching his goals.”

Junior Rileigh Knox, the lone female diver for the Tigers, ended her last competition of the event with a 13th-place finish in the women’s one-meter, scoring a 248.20. For Shaffer, this was a success considering Knox’s previous injuries.

“The meet was a good performance for her, especially moving forward,” stated Shaffer.

In the pool, the men went a long way to solidifying their third place spot in the team rankings. Strong performances by underclassmen Lewis Clough and Luca Pfyffer helped the men’s team stay in the top five.

“Between the prelims and finals, we’re showing some consistency in our swims,” said head swimming coach Dave Geyer. “It’s good to see where we’re at with this competition, and I think

we get better as each session goes on. We have a number of athletes who have their main event tomorrow, so I’m excited to see what happens tomorrow and find out what we’re made of.”

Clough won two heats in tonight’s finals, winning the B-Finals in both the 100 fly and 200 free.

“Anytime you have the chance to win a heat is huge. Once we get to the conference level, if you don’t swim well in the morning, you won’t get the chance to perform at night. Considering the number of events he’s swam and the performances he’s put in, it shows good perseverance on his part.”

Freshman Luca Pfyffer also showed he is adjusting to the yards pool well after finishing seventh overall in the 100 breast, touching the wall with a B-Cut time of 54.57.

“Last recruiting cycle, when we knew we were losing some seniors, we knew that would be a big gap to fill for us. Bringing in Luca has definitely filled that role, and I’m excited to see how he does in the 200 breast tomorrow. He’s still adapting to yards, so he’s getting better every time he dives in.”

For the women, it was the 100 back that stood out as the strongest event on the night. Freshmen Raleigh Bentz, Cassie Kalisz, and Grace Horton all swam B-Cut times during the day. Bentz qualified in the prelims with a time of 55.01, while Horton and Kalisz qualified in the finals with times of 54.54 and 54.91 seconds. Horton and Kalisz also made the LSU top 10 all-time list for the event, slotting in at T-8th and 10th respectively.

“It’s about getting in that race mode,” explained Geyer. “For those three freshmen girls, it’s what we recruited them for. We knew that they have the talent and ability to do that type of stuff. It’s just about maintaining that consistency on the front-end so we can see results on the back-end.”

The women also got two more B-cut times in the 100 fly thanks to Haylee Knight and Helen Grossman. The two tied in the prelims with a B-Cut time of 54.36 seconds, and Grossman was able to shave off more time in the finals, touching the wall at a PR time of 54.13.

“That was a good performance,” said Geyer. “Helen being able to drop a little more time in the finals again helped, and it’s about getting that second swim. For a sophomore, she didn’t necessarily have the experience of this meet.”