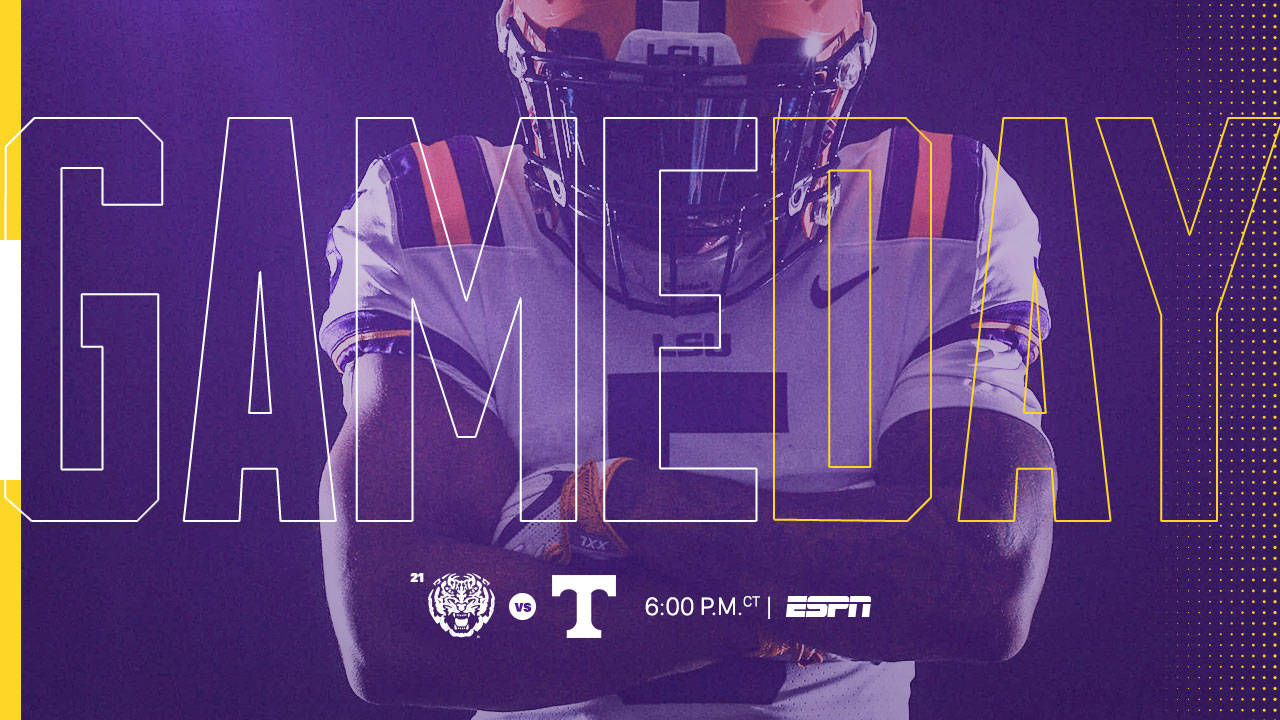 BATON ROUGE – LSU, winners of four of its last five games, will look to build on the momentum it has built since early October when the 20th-ranked Tigers travel to face Tennessee in a rare November contest between the teams.

Kickoff for LSU’s first visit to Neyland Stadium since 2011 is set for 6:05 p.m. CT on ESPN. The game can also be seen on mobile devices on the Watch ESPN app.

Saturday’s game between the Tigers and Vols represents the latest LSU has played a regularly scheduled game against a team from the eastern division of the Southeastern Conference since the league split into divisions in 1992. LSU hosted Florida last year on November 19, however that game was re-scheduled from earlier in the year due to a hurricane.

Tennessee will be play its first game under interim head coach Brady Hoke, who was appointed to that post on Sunday. Hoke, the former head coach at Michigan, takes over a Tennessee team that stands at 4-6 overall and remains winless in the league at 0-6. The Vols are coming off a 50-17 loss to Missouri last week, a game that was the final one for Butch Jones as the Tennessee head coach.

LSU coach Ed Orgeron, who has twice served as an interim head coach, is expecting the Tigers to face a rejuvenated Tennessee team.

LSU will continue to rely on its 1-2 punch at running back in Derrius Guice and Darrel Williams, who have combined for 1,531 rushing yards, 312 receiving yards and 15 touchdowns. Guice currently ranks No. 2 in the SEC with 929 yards, an average of 103.2 per game. Williams, who remains the only player in school history with 100 yards rushing and receiving in the same game, is second on squad in both rushing (602 yards, 6 TDs) and receiving (18 receptions, 241 yards).

Quarterback Danny Etling continued his solid play last week with 217 passing yards and a pair of TDs in the win over the Hogs. Etling has completed 59 percent of his passes for 1,806 yards, 11 touchdowns and only two interceptions this season.

His top target has been that of DJ Chark, who has caught 29 passes for 718 yards and a pair of TDs. Chark’s average of 24.8 yards per catch leads the SEC and ranks second nationally. Chark also doubles as one of the most dangerous punt returners in the SEC with a 14.3 average on 13 returns, two of which have gone for touchdowns.

Tennessee’s defense has allowed 40 or more points four times this year and it is giving up 27.7 points per game. The Vols have struggled defending the run as they rank last in the SEC in rushing defense at 256.9 yards a game. Overall, Tennessee is allowing 414.5 yards per game.

When the Vols have the ball, the Tigers will rely on the SEC’s leading tackler in linebacker Devin White, who has 103 total tackles to his credit. White, a three-time SEC Defensive Player of the Week selection in 2017, has recorded double-digit tackles six times this year.

Other standouts for the Tigers on the defensive side of the ball include defensive end Christian LaCouture (55 tackles, 7.0 tackles for loss, 5.5 sacks), safety John Battle (50 tackles, 1 interception) and cornerback Greedy Williams, who leads the SEC in interceptions with four.

LSU’s defense is allowing 19.2 points and 317.1 total yards per game (142.4 rushing, 174.7 passing). LSU ranks second in the SEC in sack with 31 and the Tigers have given up only seven first half touchdowns all season.

The Vols have started three different quarterbacks this year, most recently true freshman Will McBride last week against Missouri. In his first career start, McBride threw for 139 yards and a TD and led the Vols in rushing with 63 yards in the loss to Missouri.

“John Kelly might be the toughest, hardest running backs we have seen all year,” Orgeron said. “Ethan Wolf at tight end is a great player. They have weapons on both sides of the ball.”

The forecast on Saturday in Knoxville calls for a 90 percent chance of rain with temperatures in the 50s for kickoff. Orgeron is quick to point out that weather won’t play a factor in determining how LSU plays.

“We haven’t discussed anything,” Orgeron said of the weather forecast. “Whatever it is, we’re going to line up and play. We need to block out the noise. We’ll be ready to play in any circumstance, and we don’t talk about the weather. We just need to go play.”

Next week the Tigers wrap up their regular season against Texas A&M in Tiger Stadium where LSU will recognize its 20 seniors during a pre-game ceremony. Kickoff for the A&M games is set for 6:30 p.m. on the SEC Network.

LSU Notebook
• LSU has won four straight road games against SEC Eastern Division teams, a streak that dates back to the 2013 season.
• LSU is currently one victory away from securing the school’s 18th straight 8-win season. LSU’s current streak of 17 straight 8-win seasons is the longest in the history of the SEC. LSU has won at least eight games every year since 2000 when the Tigers went 8-4.
• LSU will play an opposing team with an interim coach named during the season for the first time since 1992 when the Tigers face a Jack Crowe-coached Arkansas team. Crowe took over after week 1 when the Hogs lost to the Citadel in the season-opener.