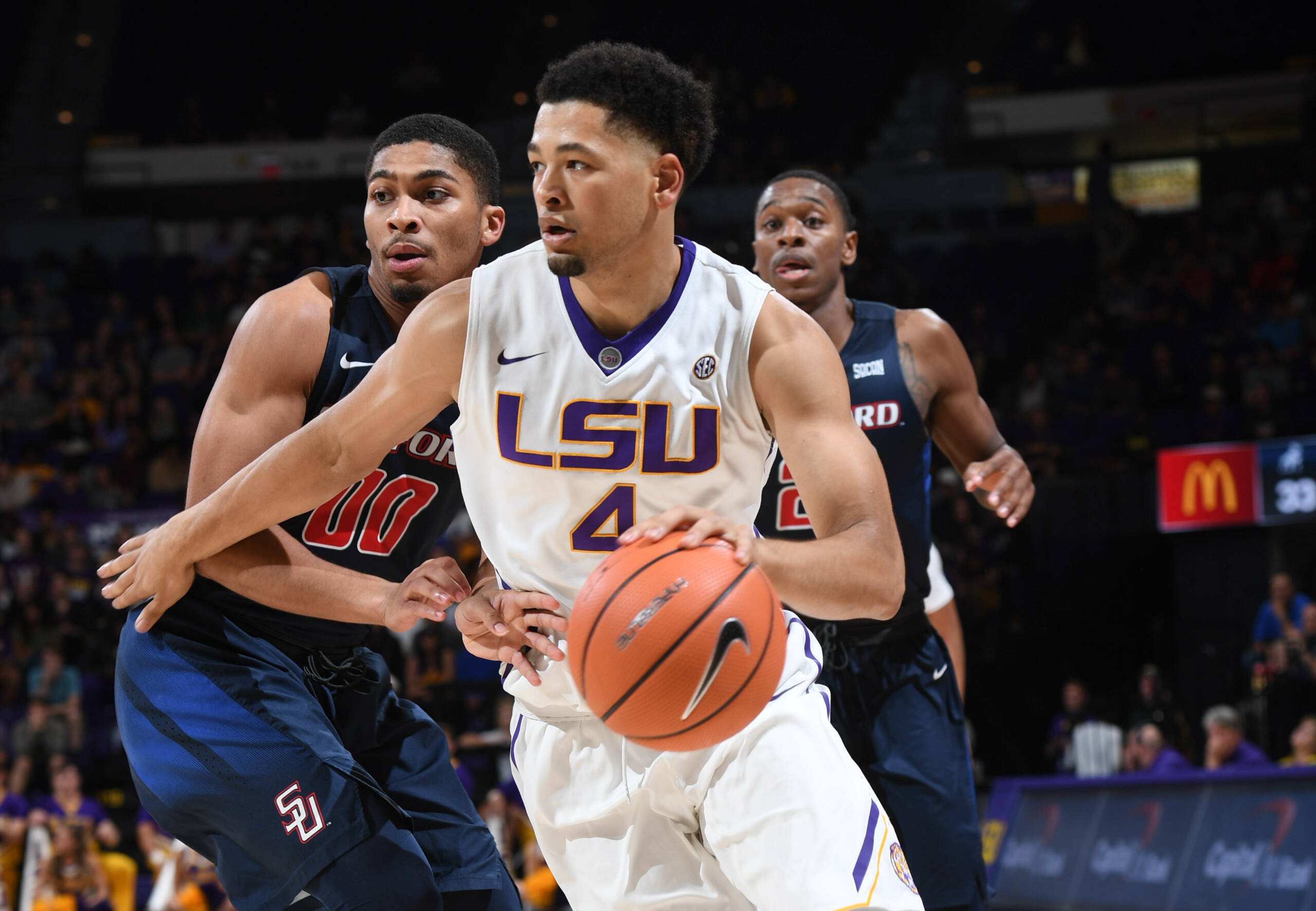 BATON ROUGE – On a night when the Tigers offense was running full blast and passed the century mark for the first time since Dec. 19, 2015, the Tigers defense was on the mind of the LSU coaching staff after a 105-86 win over Samford Thursday night at the Pete Maravich Assembly Center.

Some of those came late off turnovers as LSU only had nine, but gave up 13 points off turnovers after LSU had built up a 17-0 advantage with 13 minutes to play in the game.

It was the first half that decided the game as LSU sprinted away to a 47-28 halftime advantage. LSU had just three turnovers in the first so minutes and 15 assists on 19 made field goals.

LSU would finish with 29 assists, tying for the sixth most in a single game in school history on 39 made baskets (74.4%). The Tigers were helped in the second half by going 19-of-20 at the free throw line, including 16-of-16 in the second half.

So the big numbers came offensively for the Tigers with five players in double figures.

Sampson had a career night all around as he had a career-best seven assists. His previous high was six against Georgia on Feb. 25, 2017, and he also tied his career-best with eight boards.

Mays dropped four three-pointers marking a career-best, as well. Prior to tonight’s game, he had made three three-point field goals in a game twice.

Wayde Sims added 13 points on 5-of-9 shooting, while Duop Reath had 12 points. Brandon Rachal off the bench had 10 points. Tremont Waters came off the bench to score just five points in 27 minutes but he had eight assists and just one turnover. Daryl Edwards got the start for Waters in the game and had eight points and six assists with no turnover in 26 minutes.

Aaron Epps returned for some limited minutes (10) and hit 4-of-5 field goals for eight points. Jeremy Combs off the bench had nine points and seven rebounds.

The Tigers now will fly on Friday to Maui where they will begin play in the Maui Jim Maui Invitational on Monday night in the final of four quarterfinals from the Lahaina Civic Center. LSU will play Michigan at 6:30 p.m. island time (10:30 p.m. Baton Rouge time) in a game broadcast on the LSU Sports Radio Network and televised on ESPNU.

Opening Statement …
“Well, I’d like to give Samford credit. They played extremely hard. Their guys played hard until the last whistle. The second half was just terrible. 58 points, I don’t know if I’ve ever seen a team give up 58 points in a half. That’s what you should give up for a game. I’m really, really disappointed with our point-of-attack defense, our ball-screen defense, the amount of threes we gave up. It was terrible. I was embarrassed. We couldn’t get off of the court quick enough. That was just embarrassing. If that doesn’t improve, it’s going to be a long trip out West. It will be a long trip. On the plus side, we shot it well from the free-throw line, 29 assists on 39 made baskets. That stuff is all good. I thought our rebounding was not good enough. We took a step back in rebounding. They had 15 offensive rebounds. We had 13. Give them credit, they played extremely hard.”

On the changes from the first half to the second half …
“We communicated better. Our want to was better. It takes a complete game to beat good teams and we have yet to play a complete game. We have a really good team coming up on Monday. It’ll be a long night.”

On Brandon Sampson‘s performance …
“He was good – 20 points, seven assists, eight rebounds. That’s pretty good. He played well. We need that every night. I thought he made good decisions with the ball. He played well.”

On scoring a career-high four threes tonight …
“I just took shots that I was comfortable with. Shots that I have worked on countless times. The shots were falling today.”

On the difference between the defense in the first and second halves …
“Huge difference. The lack of discipline, not being engaged. Understanding that we were up and taking that for granted. Against the elite teams, that is not going to work. It is unacceptable.”

On being a more of a scorer instead of a passer tonight …
“They (Samford) are really aggressive in their zone, but they had some gaps that I saw myself. I was getting shots that I felt comfortable with. I worked on the shots and I was just taking them.”

On how he felt he performed tonight …
“Just by doing all the little things, that helps me offensively. Finding guys in open spots, driving the lanes, making the defense collapse and going to the glass. Things like that really got me going.”

On playing with more edge and aggression this year …
“I am just trying to be more of a facilitator because I know I can score the ball. I don’t just want to score. I want to make things easier for my teammates and I think I did a good job of that tonight. Like I said, collapsing the defense and finding guys in that collapse and try to put guys in better position.”

On the difference between the defense in the first and second halves …
“Lapses. I just think we got into lapses and let them kind of control the tempo. I think they kind of sped us up. It was okay that we got the win, but I didn’t think we won the right way. That is going to be a big key focus for us going into Maui and things like that. It is going to go up eight notches now so we really have to correct on those things and we can’t come out in the second half and have those lapses and lack of energy. Just being focused and keeping the focus on the game.”

Opening Statement …
“To be honest with you, when we went to Arkansas I thought we were very passive in the game and I told them, ‘listen, I don’t care who we’re playing, our style is to be aggressive.’ So we have to go be aggressive. In the first half I thought we were passive and I kind of challenged the guys to have some fight. I thought in the second half we fought. Did we have a lot of mistakes? Yes. I had one day to figure out how to work a small lineup and things like that so we had guys playing out of position and obviously we were way under sized. I thought in the second half we went and played and we fought and we didn’t act like this is playing the almighty whoever. We just went and played and we were aggressive and played the way I like to see us play. In the first half we dug ourselves into a big hole, but I’m proud. This could have been 38 to 40 and it turned to 19 and we kept fighting. We still made a lot of mistakes in the second half, but we fought. In the second half it was nice to see us just go play. It would have been nice to see how the game turned out if we came out from the jump and played the way we did in the second half.”

On players playing more minutes than usual …
“I thought Eric Adams battled with some big guys. He did the best he could do in there. We were way out sized in this game and he came away with seven big rebounds, including five big offensive ones to keep plays alive for us. I thought he was active with his hands. He had four steals. I think he was a bright spot for us and I know he was tired, because he’s not used to playing 32 minutes. I thought [Demetrius] Denzel-Dyson quit worrying about everything and just played basketball. I think some people use the term ‘senioritis’ when you’re worried so much about playing great your last year and you forget to just go play and have fun. I think he’s been very robotic and he’s had some open looks that he hasn’t made and some open looks that he hasn’t taken in the first couple of games and hopefully this second half is where he started playing like the Dyson of old gets him going.”