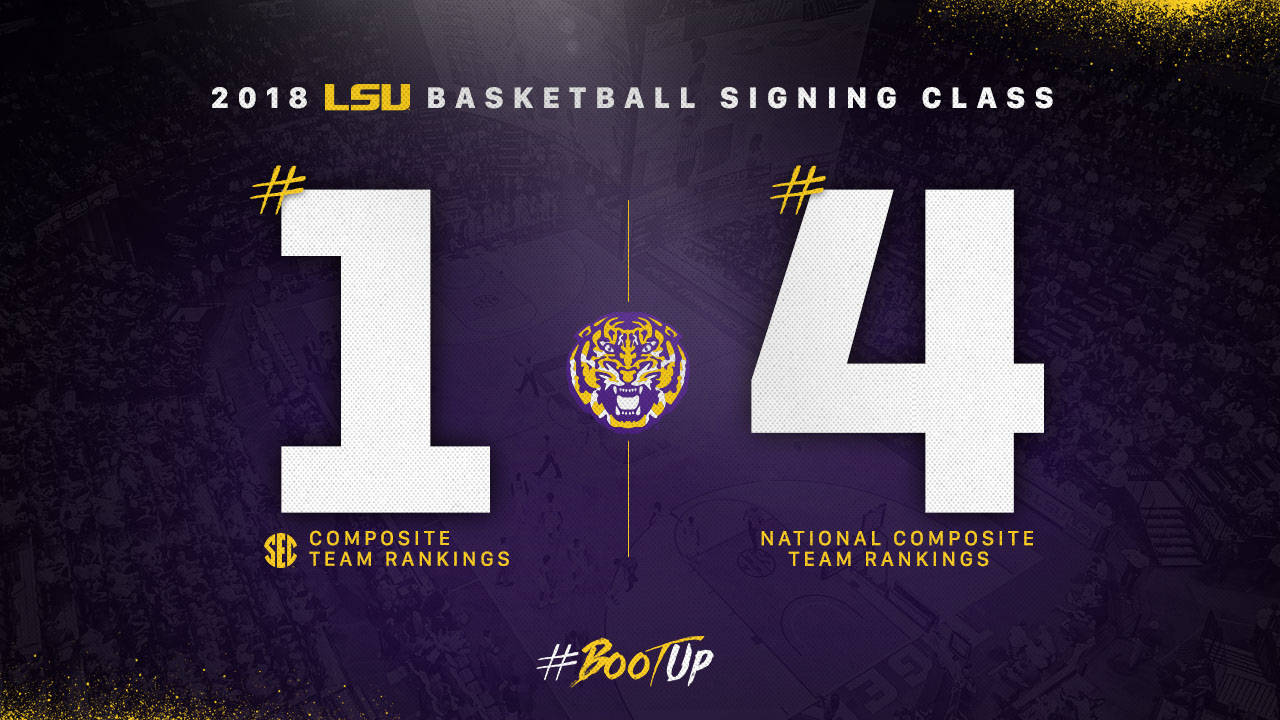 BATON ROUGE – LSU men’s basketball coach Will Wade and his coaching staff made the most of their first fall signing period together as a staff putting together three outstanding signees that has LSU ranked fourth in the nation in the composite team recruiting rankings.

The Tigers signed two players in the top 32 in the country and three in the top 61, according to ESPNU (one five-star and two four-star athletes) and the 247sports.com composite team rankings has LSU ranked fourth in the country with the present signing class behind only Duke, North Carolina and Kansas.

According to its website, the 247Sports Composite is a proprietary algorithm that compiles rankings and ratings listed in the public domain by the major media recruiting services, creating the industry’s most comprehensive and unbiased prospect and team rankings.

The Tigers signed five-star forward Naz Reid of Rochelle Catholic in New Jersey, ranked No. 18 by ESPNU and four-star athletes Ja’Vonte Smart of Scotlandville Magnet in Baton Rouge (ranked No. 32); and, Darius Days of IMG Academy in Florida (ranked No. 61).

“Our staff has worked extremely hard since we arrived to find the best prospects that fit what we were looking for at LSU,” said Coach Wade. “I am grateful for their efforts. We are excited about getting these three players here next year and we appreciate their belief in what we are trying to accomplish here at LSU.

“We are continuing to work hard, even as the season begins, to find those players that fit in our system and have the same values that we do regarding LSU and this basketball program,” Coach Wade continued. “This class is only complete for the time being. We are now recruiting for the spring signing period in 2018 and beyond.”

Here is a summary of the three players that signed with LSU during the fall signing period (in alphabetical order):

DARIUS DAYS – Four-star forward Darius Days will attend the IMG Academy in Sarasota, Florida this coming season. From Raleigh, Florida, Days was named the Gainesville Sun’s co-boys basketball player of the year for 2017, averaging 21 points, 10 rebounds and two steals per game for The Rock School in Gainesville. Days is ranked the 13th best power forward in the nation. Days shot 47.3 percent from the field, 38.5 percent from three-point range and 82.1 percent from the free throw line.

NAZ REID – Five-star forward Nazreon Reid of Asbury Park, New Jersey is a 6-10 power forward. Reid prepped at Roselle (New Jersey) Catholic school. Reid was listed as the No. 3 power forward for the class of 2018. He played this past summer for Sports U and averaged 14.1 points, 9.9 rebounds and 2.0 blocks per game. For Roselle as a junior he averaged 13.8 points and 9.1 rebounds a contest. He helped lead Roselle Catholic under Coach Dave Boff to the Tournament of Champions title. According to SB Nation, Reid has a 7-5 wingspan and a vertical of 19.5” with a standing reach of nine feet.

JA’VONTE SMART – Four-star guard Ja’Vonte Smart of Scotlandville Magnet High School in Baton Rouge is the two time winner of the Louisiana Farm Bureau Insurance/Louisiana Sports Writers Association Mr. Basketball award as well as the Gatorade Louisiana Boys Basketball Player of the Year. He was MVP of the Louisiana Sports Writers Association Class 5A team for the second time as well. Smart is the No. 1 player in the state of Louisiana. As a junior, Smart led Scotlandville to the LHSAA Division I select state title with averages of 25.1 points, 8.7 rebounds, 6.4 assists and 2.1 steals. It was the second state title in three seasons for Scotlandville and Coach Carlos Sample.

The Tigers continue the 2017-18 men’s basketball season Thursday night at 7 p.m. at the Maravich Center against Samford. Tickets are available at LSUtix.net. Follow LSU Basketball at www.Facebook.com/LSUBasketball and on Twitter @LSUBasketball.