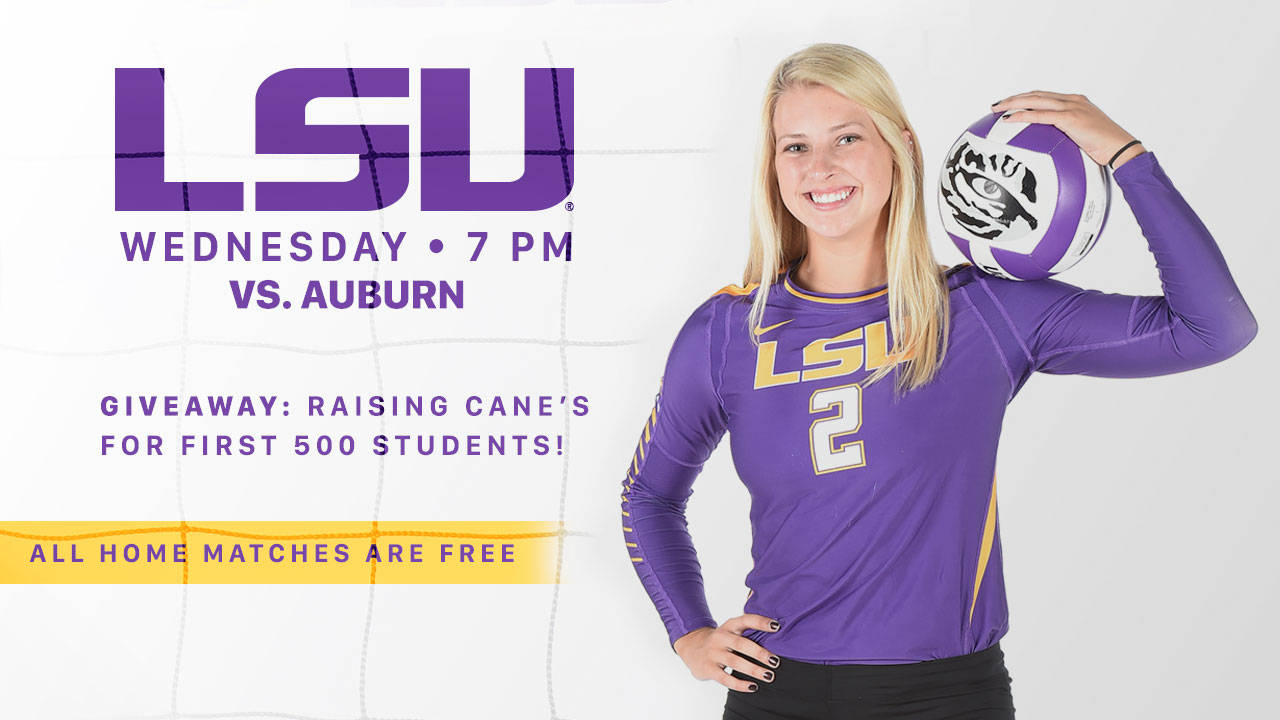 The matchup will air live on SEC Network. Fans can access the match online through WatchESPN.com and the app. Sam Gore and Dain Blanton will be on the call.

Fran’s Final Thoughts
“We are excited to come home and compete. Our fans have been awesome this year and we look forward to having them in the PMAC, once again, cheering us on. Auburn is a very good team that provides a variety of challenges.”

Last Time Out
LSU went on the road and dominated Mississippi State, claiming a 3-0 sweep by scores of 25-20, 25-8 and 25-21. The Tigers were led by freshman Taylor Bannister, who finished with a match-high 10 kills on 17 attempts, with three errors for a .412 hitting percentage. Sophomore setter Anna Zwiebel dished out a match-high 32 assists while freshman Raigen Cianciulli registered a match-high 15 digs.

A Look at Auburn
Auburn currently sits in seventh place of the SEC with a 7-7 record. Overall, Auburn is 14-9 on the year. Auburn has won three out of its last four matches but is coming off a 3-0 loss to No. 6 Kentucky on Sunday. Brenna McIlroy leads Auburn on offense, averaging 2.91 kills per set for a total of 256 on the year. Alexa Filley directs the offense and averages 10.8 assist per set. Jesse Earl anchors the back row, averaging 5.06 digs per set for a total of 445 on the season. As a team, Auburn is hitting .212 and averages 13.7 kills per set, 12.9 assists per set, 16.03 digs per set and 1.42 blocks per set.

All-Time vs. Auburn
LSU leads the all-time series against Auburn 42-15. The Tigers took down Auburn earlier this season in Auburn, Alabama, claiming the victory in three sets. The last time the Tigers defeated Auburn in the PMAC was on Oct. 25, 2015. If the Tigers were to win again this season, it would be the first time since 2011 that LSU defeated Auburn twice in a season.

Team Notes
>> In LSU’s lone match last week, the Tigers improved to 18-7 on the year and 9-5 in the SEC after a 3-0 sweep of Mississippi State on the road. The Tigers currently sit in fourth place in the league and have an RPI of 33.

>> Against Auburn last time, LSU claimed the road victory in straight sets by scores of 25-23, 25-23 and 26-24. In the close match, senior Gina Tillis and sophomore Jacqui Armer led the team with eight kills each. Sophomore Anna Zwiebel finished with 33 assists and freshman Raigen Cianciulli registered 16 digs. The Tigers also outblocked Auburn 8-4 and outhit .212-.169.