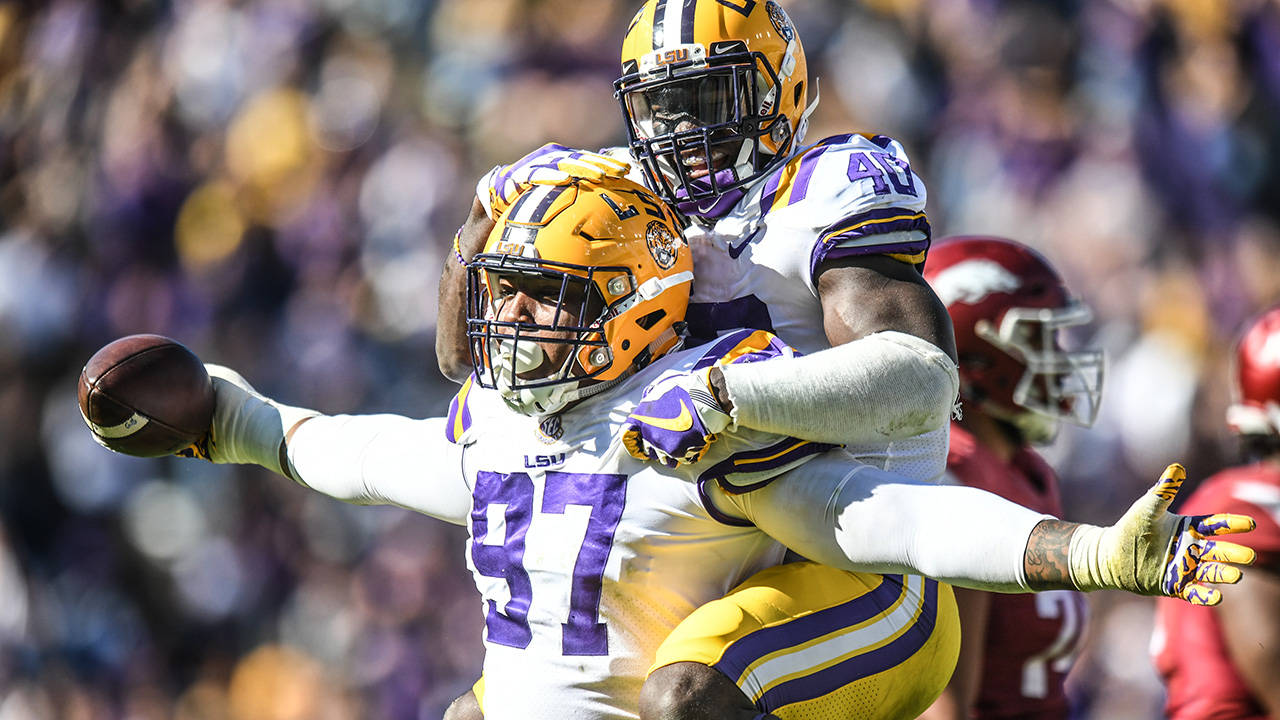 BATON ROUGE — LSU scored four second-half touchdowns including three by running back Derrius Guice, as the Tigers shook off the cobwebs from a rare morning kickoff to defeat Arkansas, 33-10, on Saturday in Tiger Stadium.

Starting for the 20th-straight game, quarterback Danny Etling led the charge for LSU. The senior completed 11-of-16 passes for 217 yards with two touchdowns, now sitting 11th in LSU history with 3,929.

Guice carried 21 times with a 7.0 average for his 11th 100-yard game, while senior running back Darrel Williams added 43 yards on nine carries.

The Tigers defense harrassed Arkansas throughout the contest, recording eight pass breakups and six quarterback hurries. Linebacker Devin White continued to lead the way, eclipsing the 100-tackle mark for the season with a game-high 14 against the Hogs. Follow linebacker Donnie Alexander added a career-best 12 tackles, while safety Donte Jackson had eight tackles including a sack to go with three pass break-ups. Linebacker Arden Key had four quarterback hurries and three tackles.

Razorbacks quarterbacks Austin Allen and Cole Kelley combined to complete 16-of-33 passes for 176 yards with an interception on the Hogs’ final offensive play of the game.

LSU opened the scoring at the 1:39 mark of the first quarter when quarterback Danny Etling connected with wide receiver DJ Chark on a 45-yard touchdown pass. The TD catch was the first scoring reception this season for Chark and the fourth of his career.

The Etling-to-Chark aerial culminated a three-play 62-yard drive that started with a 15-yard burst by running back Derrius Guice.

Arkansas did not cross its own 40-yard line until its final drive of the first half, when the Razorbacks moved 86 yards on 10 plays to tie the game at 7-7. The march was capped with a 1-yard TD burst by running back Devwah Whaley 16 seconds prior to halftime.

The Tigers struck quickly to open the second half, rolling 75 yards on eight plays with the drive ending on a six-yard touchdown run by Guice. LSU led 13-7 at the 11:13 mark of the third quarter after placekicker Connor Culp missed the extra point attempt.

Arkansas responded by marching 53 yard on nine plays to reduce the margin to 13-10, when Connor Limpert nailed a 38-yard field goal at the 6:22 mark of the third period.

LSU answered with a 65-yard, five-play march that was capped by Guice’s 33-yard scoring burst. The drive also featured 19-yard run by Guice to the Arkansas 33-yard line on the play prior to the touchdown. The Tigers led 19-10 with 4:29 left in the third quarter after Culp was wide left on the PAT attempt.

Guice’s touchdown pushed him over the 100-yard mark for the 11th time in his career, tying him for fifth place with Jeremy Hill (2012-13) on the LSU career list for 100-yard rushing games.

Etling connected with Chark again on the first play of the fourth quarter with a 68-yard bomb down the sideline and into the end zone, giving LSU a 26-10 advantage with 14:52 left in the contest. The touchdown capped a 69-yard, four-play drive, as the Tigers reached paydirt for the third-straight second-half possession.

Follow LSU’s only punt of the second half, the LSU defense came up with a fourth-down stuff of Arkansas’ Kelley at the Hogs 22. The Tigers took advantage of the short field, as Williams picked up a first down on third-and-2 before Guice ran 10 yards to the 1 to setup his third score of the game.