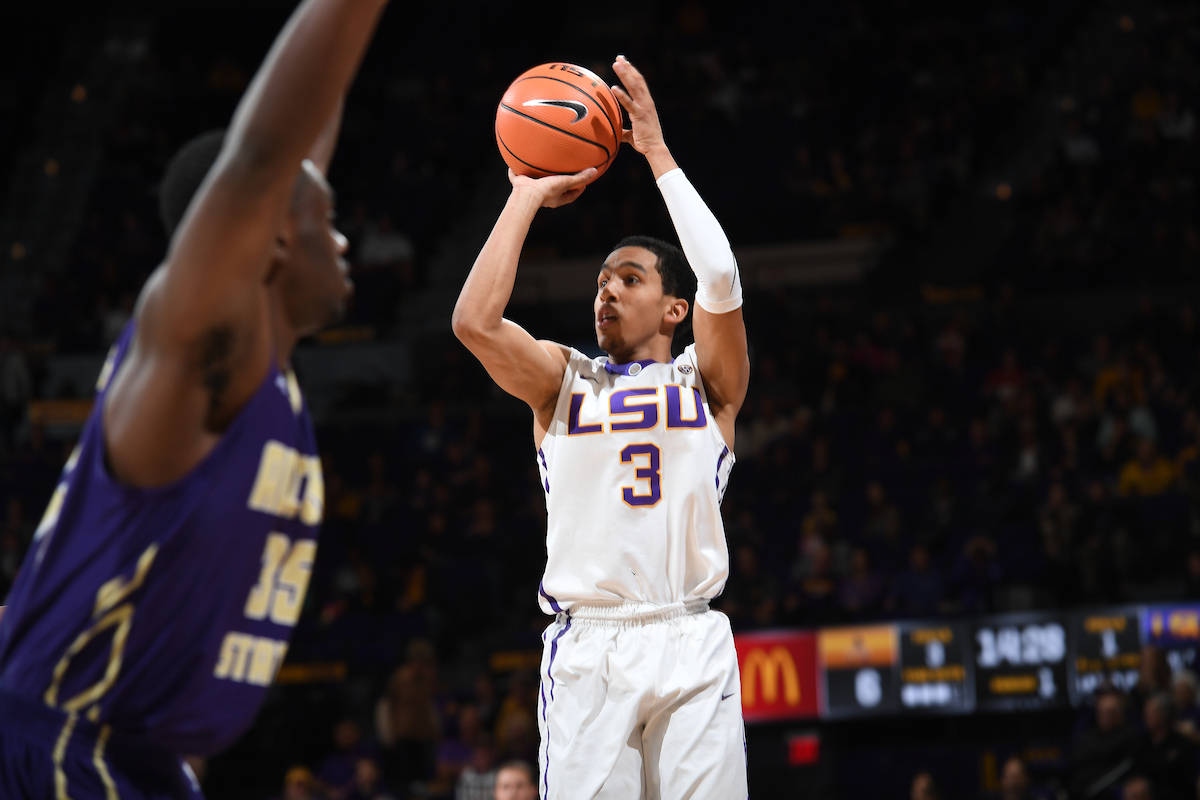 BATON ROUGE – The Will Wade era of LSU Basketball opened with a resounding win Friday night as the largest opening crowd in at least the last 20 years (11,856) saw the Tigers lead wire-to-wire in scoring a convincing, 99-59, win over Alcorn State at the Pete Maravich Assembly Center.

The win was played in the way that may become some of the norm for LSU in the months and years ahead – hardnosed, blue collar basketball with offensive ball movement that leads to good shots and a team that plays with a chemistry that gives fans a reason to come back and see where things go from here.

Freshman point guard Tremont Waters had a debut game that was one of the better ones for a point guard in recent times with a 4×5 effort of 27 points, five rebounds, six assists and five steals. Waters had just one turnover in 27 minutes, hitting 9-of-13 field goals, 4-of-6 treys and 5-of-6 free throws.

Waters, in the two-point guard system of Coach Wade, teamed with Skylar Mays nicely as Mays had seven points, five assists in 23 minutes. Mays also had just one turnover as the Tigers met their team goal of 12 or less turnovers with seven.

Alcorn turned the ball over 16 times and LSU posted 24 points off those turnovers.

Also in double figures for LSU was senior Duop Reath and sophomore Wayde Sims, both with 11 points each, and Brandon Sampson with 10.

The Will Wade era had the crowd roaring in the first minute as after an Alcorn State miss, Reath took a Mays pass for a 2-0 lead. A turnover then led to a three-pointer by Sampson, Waters made a free throw and LSU would get its next points at the 17:37 mark on a three by Waters that made it 9-0, had the crowd standing and forcing Alcorn to call timeout.

Alcorn would get the game down to five points, 18-13, with 12:11 to go in the first half but that was as close as LSU was going to let them get as LSU built as much as a 21-point advantage in the half before going to intermission up, 51-34.

One thing Coach Wade saw was that points in the paint were 18-18 at the break and that’s where LSU tried to go more in the second half and finished the game with a 42-30 advantage.

In the second half, it was more of the same as LSU built the lead to as much as 42 points in the final minute before settling for the final margin as LSU dribbled out the final 25 seconds as the crowd came to its feet to salute the Tigers.

LSU now will face its second challenge on Thursday as Samford comes to town after their opening 99-56 loss at Arkansas Friday night. The game is at 7 p.m. and tickets are available at LSUtix.net.

Opening Statement …
“I want to start by thanking everybody who came. We almost had 12,000 people in here, which was awesome. We appreciate everyone who came. I know there is a lot of other stuff going on with the high school football playoffs. We have an early kickoff tomorrow. It meant a lot to our guys and a lot to our team that everybody showed up. I thought the crowd was great. I thought the band was great. Having the extra band members there, Dr. Jones did a great job with them. We are really, really appreciative of everybody who came out. As far as the game, I thought in the second half we did a better job of establishing the paint. It was 18-18 at halftime. We won the paint battle 42-30. We really dominated the paint in the second half, which is important. I thought we did a good job on the glass. We did a good job of getting in the paint on offense, particularly in that second half. We did a nice job of valuing the ball and forcing some of their turnovers. I was a little disappointed because we let them offensive rebound too much. They are a good offensive rebounding team. We let them get too many second chance opportunities. We gave them 17 second chance points, and I thought we gave up too many open threes. Even though they missed them, I thought we gave up too many open threes. I think our pressure got to them as the game wore on. The second half we were in great shape, and we just wore them down.”

On freshman guard Tremont Waters‘ performance …
“You never know as a freshman, but we get to see that most days in practice. Over the last 10 days to two weeks, he’s just been phenomenal in practice. We get to see that in practice, but you never know how it’s going to be in a game. He was certainly very good. Not every night is going to go like that now. Not every night is going to go like that. We wish it does. Obviously, he scored 27 points, got six assists, five rebounds and five steals. That’s a heck of a stat line right there. You can win a lot of games doing that. I thought he and (Skylar) Mays together really complimented each other—12 assists, two turnovers. We will take that every day and twice on Sundays.”

On how he is feeling after his debut…
“I am feeling good about the win. My teammates and I came out. We knew we had to practice hard and prepare for our first game so we pretty much knew we had to get out and do it and execute on everything.”

On if he had fun tonight…
“It was a lot of fun. We came out and started off 9-0 and from there we just kept improving, bumping the lead up and the crowd got into it. It was a great time.”

On if ball movement was an emphasis tonight…
“Most definitely. In practice Coach (Will) Wade and the coaching staff talked about moving the ball and not letting the ball stick. We came out and got the ball moving and we just capitalized and made shots.”

On what Coach Wade was like after the game…
“He was just saying that we have to get back to work on Sunday. We played hard today and it’s clean. We have to go to work.”

On how playing a smaller school prepares them for the rest of the season…
“We basically have to make sure we execute our game plan and do what we are supposed to do. For example, winning the rebound battle because they are smaller than us. We have to win that. Getting our paint touches because they don’t play as long. Their goal is to really not let us get inside. The goal is to make us shoot so we have to follow the game plan and get our paint touches.”

Opening Statement…
“You know when a team comes out and shoots the ball the way they shot, it’s hard to get back in it. We’ve got to play a little bit harder. We’ve got to give those guys credit. It was a great atmosphere. They were ready. They made shots when they had to make shots. We just have to do better just closing out shooting. That is basically it.”

On what they could improve on moving forward…
“We just have to execute better. We have to rebound better. Got to be a better team from what we showed today because we are a better team.“