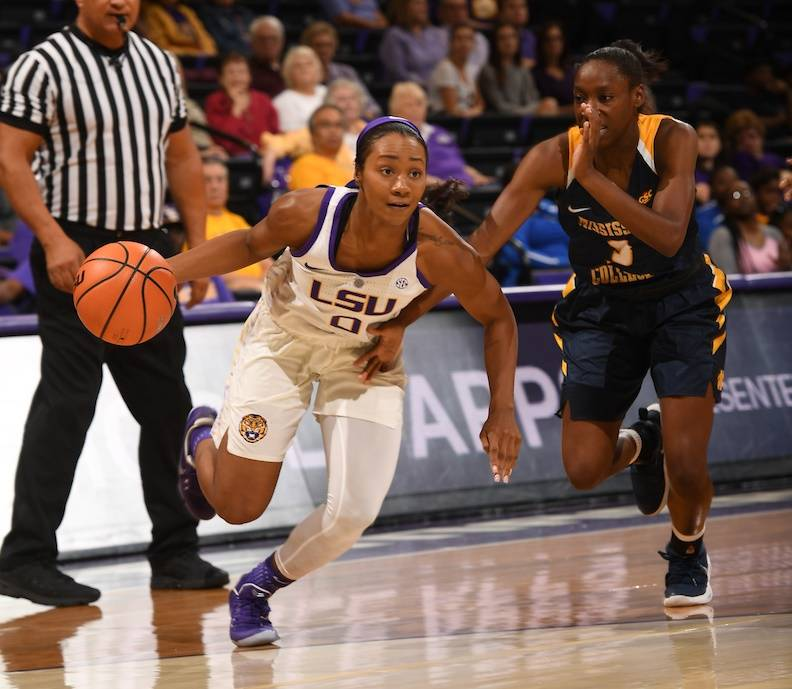 TAMPA, Fla. – The LSU women’s basketball team dropped its first game of the season on the road against the nationally-ranked USF Bulls by a score of 61-55 at the Sun Dome  on Friday.

Junior Chloe Jackson led the Lady Tigers in scoring with 21 points, her seventh 20+ points game of her career, while adding seven rebounds, two blocks and a steal.

Jackson set the tempo for the Lady Tigers to start the game, scoring 15 of their 25 first-half points. Jackson also flashed her defensive prowess in the first quarter, collecting a steal and taking advantage of the turnover to drive down the court and tie the game up at eight apiece.

USF ended the first quarter on a 7-2 run to give them a 15-10 advantage, but the Lady Tigers would quickly fight their way back into the game, going on an 8-3 run to start the second quarter to level the game at 18-18.

The two teams traded scores back and forth over the final few minutes of the first half before Jackson, with LSU down by six, hit a deep corner three to trim USF’s lead to 28-25 going into the half.

USF took advantage of a cold shooting stretch for the Lady Tigers to open the third quarter, going on a 13-5 run to increase the lead to 41-30. Once again, however, LSU found its stride offensively and climbed back into the game courtesy of a Louis three-pointer and two quick baskets from Cherry to wrap up the third.

A three-pointer from Cherry and a follow-up jumper from Jackson pulled the Lady Tigers to within two, but they couldn’t bridge the gap to close out the game despite seven straight fourth-quarter points from Louis.

On a night where neither team shot the ball particularly well, USF hurt the Lady Tigers from deep, going 6-of-25 from beyond the arc while LSU hit only three deep balls on eight attempts.

LSU’s defensive intensity was present as usual, but the Lady Tigers scored only 11 points off of 13 turnovers, including just four steals on the night.

Home Opener on November 12
Fans should make plans to come early to the LSU home opener on Sunday, Nov. 12 against Southeastern Louisiana. LSU great Sylvia Fowles will have her jersey retired in a special pre-game ceremony at 1:30 p.m. Joining Fowles on that day will be her teammates from the 2006, 2007 and 2008 Women’s Final Four teams, who will be recognized at halftime. Tipoff for the game is set for 2 p.m. Tickets are available at LSUTix.net. The first 1,000 fans will receive a Sylvia Fowles replica jersey in honor of the LSU legend.

Cool Promotions and Great Ticket Discounts
Fans can check out this season’s schedule of LSU women’s basketball promotions and giveaways at LSUSports.net/promotions. The schedule is highlighted by the annual Gold Game on Sunday, Jan. 7, Pack the PMAC on Sunday, Jan. 28, and the annual Play4Kay Pink Game on Thursday, Feb. 15. The annual Alumni Day game will be held on Mardi Gras weekend, Sunday, Feb. 11.