Football Set to Rise and Shine as Tigers Host Arkansas 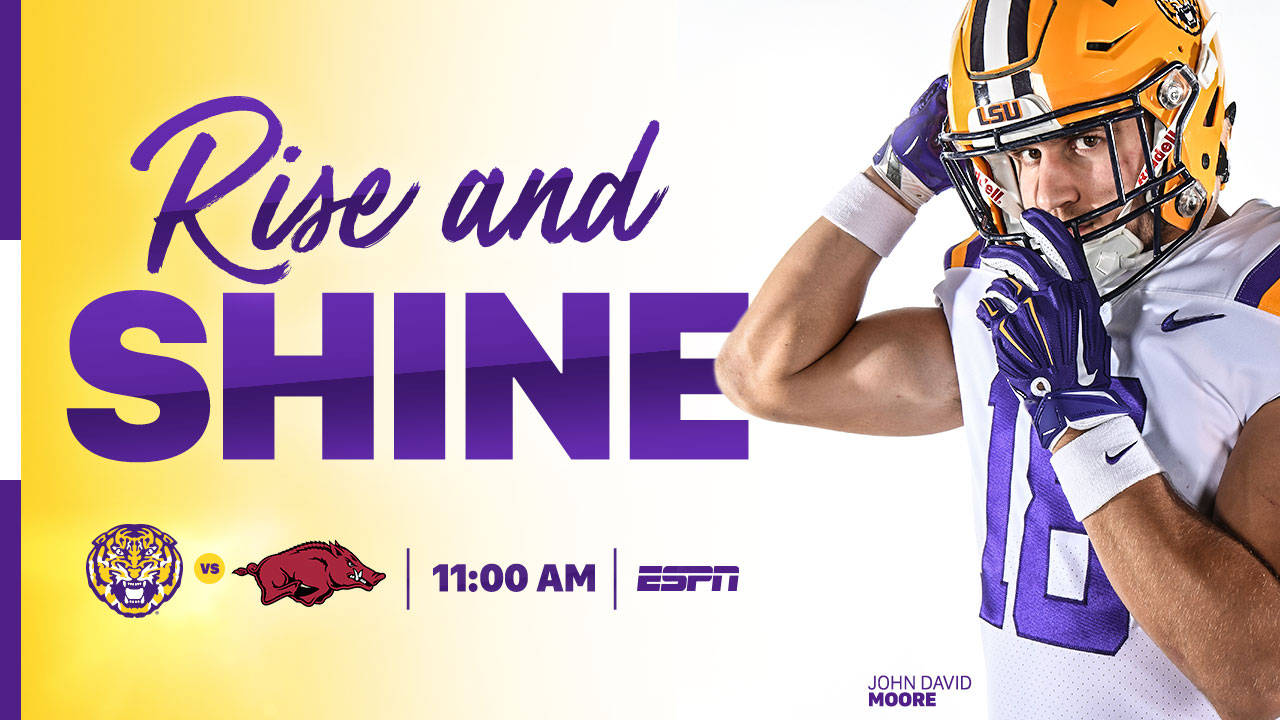 BATON ROUGE – LSU coach Ed Orgeron has used all week to prepare his team for not only Saturday’s opponent – the Arkansas Razorbacks – but the 11 a.m. kickoff, which will represent the earliest start time for a Southeastern Conference game in Tiger Stadium going back to the 1950s.

The Tigers and Razorbacks kick off at 11:02 a.m. on Saturday in Tiger Stadium on ESPN. The game between SEC Western Division Rivals also serves as the Battle for the Boot with the winning team getting possession of the trophy that is molded in the shape of Louisiana and Arkansas for a year. LSU is currently in possession of The Boot after last year’s 38-10 win in Fayetteville.

LSU brings a 6-3 overall mark and a 3-2 league record into the game, while the Razorbacks are 4-5 overall and 1-4 in conference action. Arkansas has won back-to-back games by a single point and of its five losses; three have come to Top 25 teams.

Orgeron and the 25th-ranked Tigers will look to continue to build on its midseason resurgence, a stretch that has seen LSU win three of four SEC games. LSU’s lone setback over the last month was a 24-10 loss to top-ranked Alabama last week, a game that the Tigers outgained, were more physical and to those who were at the game, outplayed the Crimson Tide.

LSU’s performance against Alabama, along with wins over Florida, Auburn and Ole Miss, have put the Tigers in position to finish the season with a flourish. However, the Tigers must first get by an Arkansas team that is much better than its record indicates.

As part of LSU’s preparation for the Arkansas game, Orgeron and his staff have had to prepare the Tigers for an earlier than usual start time. LSU was able to draw from last year’s 29-9 bowl win over Louisville, a game that also started at 11 a.m.

“We have been talking about it and preparing for it all week,” Orgeron said of the early kickoff. “It challenges you. You have to get up and get ready. There’s no lying around all day. It’s early for both teams. I think you guys (media) talk about the early kickoff more than we do. It won’t be a factor for us.”

LSU’s defense, which limited Alabama to 299 yards and a season-low 24 points, has had to get ready for two Arkansas quarterbacks this week as opening day starter Austin Allen is healthy and could potentially play on Saturday after the last four games.

Allen started the first five games of the season before suffering an injury against South Carolina. His replacement, 6-foot-7 Cole Kelley from Lafayette, accounted for six touchdowns the past two weeks. Kelley has thrown for 1,002 yards and eight touchdowns, while Allen has passed for 850 yards and eight scores.

With 30 sacks this year, LSU ranks No. 2 in the league in that category. Senior defensive end Christian LaCouture and nose tackle Greg Gilmore pace the Tigers with 5.5 sacks each. Outside linebacker Corey Thompson has 5.0 sacks to his credit.

Offensively, running back Derrius Guice ranks No. 3 in the SEC in both rushing yards (97.8) and all-purpose yards (106.6). Last year, Guice had a 96-yard rushing TD against the Razorbacks – the longest run in school history – on his way to a 252-yard game in the win.

Guice is joined in the backfield by senior Darrel Williams, who has accounted for 559 yards and six touchdowns on the ground and another 241 yards and 18 receptions in the passing game. Guice and Williams give LSU one of the best 1-2 punches in the backfield in the SEC.

Quarterback Danny Etling will make his 20th consecutive start for the Tigers on Saturday. This year, Etling has thrown for 1,589 yards and nine touchdowns with just two interceptions. His top target is senior DJ Chark, who leads the SEC in yards per catch at 23.5. Chark has caught 25 passes for 588 yards.

Orgeron said the Tigers will be fresh heading into the Arkansas game as he and the staff has cut back on some on-field practice time this week.

“I just wanted them fresh,” Orgeron said of the reducing of practice time by 15 minutes twice this week. “In the 10th game of the season I wanted them fresh. In a seven o’clock game you get to rest a lot in the hotel room. They get to sleep until 10 o’clock in the morning, go back and take a two-hour nap. That is lot of rest.

“They are not going to get that rest so we moved everything up. This time of the season, you can cut back on practice, but I wanted to execution. I want them to go hard. Particularly I wanted them focused, and they were today.”

Next week, the Tigers travel to Knoxville to face Tennessee before returning home on November 25 for the regular-season finale against Texas A&M.