IN FOCUS: Moore and LaCouture 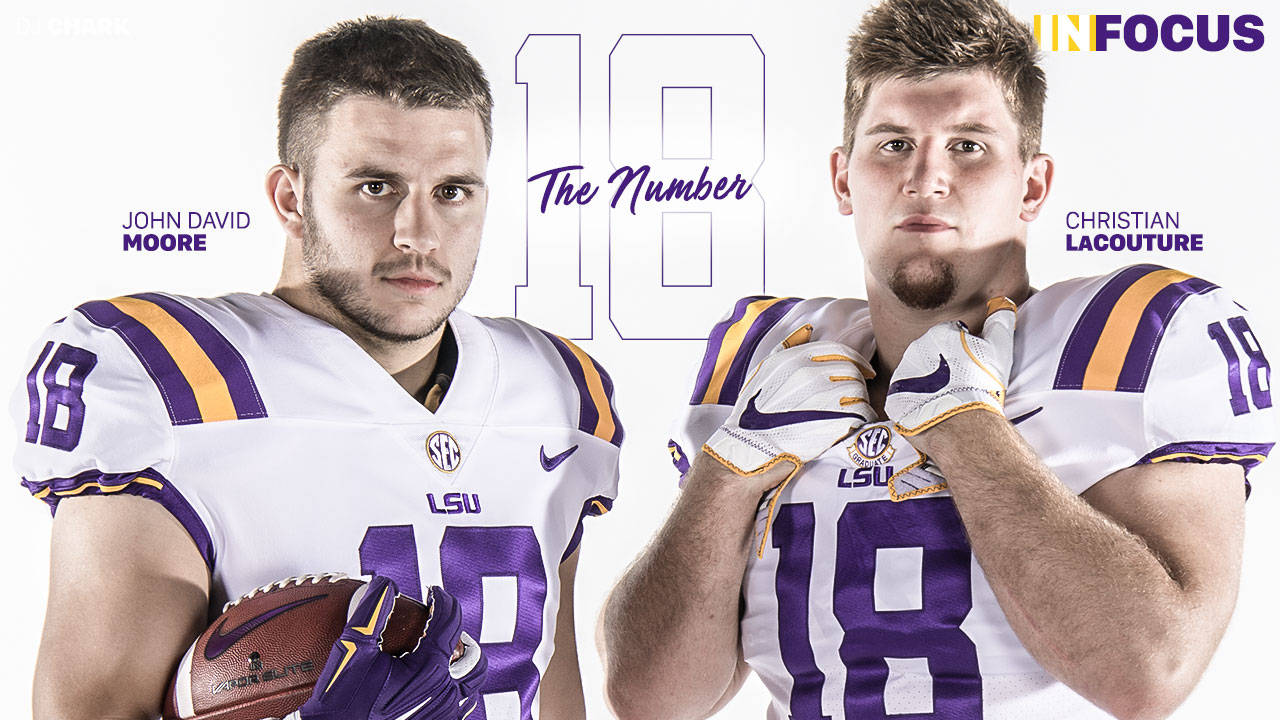 Everyone from the average college football fan to NFL executives knows about the storied legacy of the No. 18 in LSU football.

Opposing players know that the man wearing the No. 18 is going to cause trouble for them for a full 60 minutes.

In years past, LSU’s opponents have probably been filled with relief when they see No. 18 leave for the sidelines, but this season they have had no such luxury.

When one No. 18 steps off the field, another one takes his place.

That’s because, for the first time, the Tigers have two players deemed worthy of the one-eight in fifth-year seniors John David Moore and Christian LaCouture.

As Moore spends his time blowing up blitzing linebackers to clear the way for his backfield partners, LaCouture does the dirty work on the defensive side, terrorizing opposing offenses by disrupting play after play.

This season, the No. 18 has struck twice as much fear into the Tigers’ foes, continuing the long and proven track record of the hard work and commitment associated with the jersey.

One of LSU football’s most famous tradition began with quarterback Matt Mauck, who led the Tigers to the 2003 National Championship victory over Oklahoma.

From Mauck, the honor went to incoming freshman Jacob Hester, who holds the record for longest tenure as No. 18, wearing the jersey for all four of his years at LSU.

After helping lead the Tigers to their second FCS title in five seasons as a senior in 2007, Hester handed off the No. 18 jersey to tight end Richard Dickson, who caught two touchdowns in that national championship win over Ohio State and still sits atop the list of all-time receiving yards by a tight end in program history.

After a decade of No. 18 being worn on the offensive side of the ball following running back Richard Murphy’s tenure in 2010, the jersey spent three straight years on defense from 2011-13 as safety Brandon Taylor, defensive tackle Bennie Logan and linebacker Lamin Barrow each spent a year with the one-eight on their backs.

In 2014, running back Terrence Magee became the eighth player to be presented with the No. 18.

After a two-year stint with standout defensive back Tre’Davious White in 2015-16, the time had come to find a new home for the No. 18 this season, only this time, that prestigious number combination would rest on not one, but two pairs of shoulders.

LaCouture recalled finding out he was the first to receive the honor for the 2017 season while he was re-heating some leftover food at his house.

“I just started getting a bunch of calls and texts from people saying congratulations and I didn’t really know what was going on,” LaCouture said. “They just kept telling me to go check Twitter and that’s when I saw Coach O had given me the No. 18 jersey.”

LaCouture was overwhelmed with words of congratulations from family and current and former teammates, as well as a few of the previous No. 18s, but he felt he wasn’t the only one worthy of the accolade.

“It was very humbling when all of the former guys called to tell me that I earned it, but the coaching staff and I felt like two people deserved it,” LaCouture said. “That’s when we brought up J.D., because J.D. has worked his butt off. What he has done for this program since he’s been here is astronomical.”

Shortly afterward, at a team meeting where LaCouture was introduced as the season’s No. 18, Moore was hit with an outstanding gesture he could have never seen coming.

“Christian addressed the team and thanked everyone for awarding him the jersey,” Moore said. “But then he sort of went off track and started talking about how he wanted to start a new tradition and bring in somebody for offense and have somebody on both sides of the ball representing the number.”

Before the reality of what was taking place had fully set in for the senior F-back, he was being presented with a jersey of his own.

“The rest was kind of a blur for me,” Moore said. “They pulled out a second No. 18 jersey with my name on the back. All my life, I had grown up watching guys like Jacob Hester wear that jersey and that was LSU to me. I was going to go out of my way to do my best to represent the jersey and everything that it means because they went out of their way to include me in that tradition.”

With the introduction of the second No. 18 jersey, the bond between the two fifth-year seniors who started their LSU careers on very different paths was strengthened even further.

The pair came into Baton Rouge for the 2013 season, LaCouture as a versatile four-star recruit out of Nebraska who played every position on the defensive line, Moore as a walk-on from Ruston, La., who played tight end in high school.

LaCouture was an early enrollee in the spring before the 2013 season, so by the time Moore worked his way onto the team in the summer, LaCouture was already putting in work with the upperclassmen. But that didn’t stop him from taking notice of the hungry young walk-on.

“J.D. came in and I really respected him,” LaCouture said. “He had a triple-digit jersey number as a walk-on in the beginning, but he didn’t care. He went out there and did his thing. He would always go to the early workout, and he always stayed after.”

When the season began, LaCouture saw immediate playing time, playing in all 13 games as a freshman, while Moore was redshirted for the year.

In his sophomore season, LaCouture started all 13 games at defensive tackle as a key part of LSU’s SEC-leading defense, while Moore saw limited action on the field as a tight end, fullback and a special teams player as a redshirt freshman.

In his second season, Moore began to make his destructive talents in the backfield known as he cleared the path for Leonard Fournette‘s record-breaking runs.

Finally, after two-and-a-half years of patient aggression and a tireless, meticulous approach, Moore’s dedication was rewarded with a full scholarship.

“Being awarded my scholarship going into the 2015 season as a walk-on, that was the high point of my career at LSU at the time,” Moore said. “To be one of the very few walk-ons that was given the chance to be on scholarship, there’s a value to the fact that your coaches and teammates bestow enough confidence in you to treat you as a scholarship athlete.”

Unfortunately, the highest point of Moore’s career would be cruelly met with the lowest point, and his patience would be tested yet again as the bruising fullback suffered a season-ending knee injury against Alabama.

“Coming back from that was tough,” Moore said. “I learned a lot about perseverance and trusting in God’s plan. I think it allowed me to zoom out and realize that football isn’t the end goal in life. It’s a lot of fun, but it can be taken away at any moment. It’s precious to have this opportunity that we have to play here at LSU.”

He didn’t know it at the time, but Moore’s long road to recovery from the knee injury he suffered would prove to be a testament to his own relentless attitude, but it would also serve as an opportunity to encourage and guide LaCouture through a similar setback.

Just as Moore was nearing full strength in preparation for the 2016 season, disaster struck for an LSU team with high aspirations as LaCouture suffered a torn ACL in camp before the season had even truly begun.

LaCouture found himself leaning on Moore, looking for guidance from the one person who knew exactly what he was going through.

“I would talk to J.D. a lot about it because he went through the same thing,” LaCouture said. “That’s why J.D. and I are so close. It was gruesome. It was hard. People talk about the mental state for a reason. You’re going through physical aches and pains, but really the mental stuff is the hardest thing. You know there are going to be bad days, and there are going to be days that you think you can’t go through it, but you have to fight through it.”

Their ability to overcome a couple of excruciatingly unfortunate injuries is part of what earned Moore and LaCouture to right to wear the No. 18 this season, but it’s also due to their proven history of doing what needed to be done for the good of the team, regardless of who got the credit for it.

“I don’t think Christian or myself would really consider ourselves high-profile guys,” Moore said. “He’s in the trenches and the majority of my plays are blocking, so for guys like us it’s really an honor that the jersey doesn’t mean you’re the one in the limelight or you’re the one scoring all the points. Even if we’re not the one getting the ball or making every tackle, we’re still going to set the standard and play our very best and hardest no matter who gets the glory.”

“I’m the kind of guy who shuts his mouth and does the dirty work,” LaCouture added. “I think it went a long way with my teammates; a lot of the guys respected that. It didn’t matter what number I was wearing, I’d shut my mouth and do my work.”

Looking back to the beginning of their respective journeys, both LaCouture and Moore are still astonished at how far they’ve come since the first time they met, but they still hold on to what they were before they wore the No. 18.

“The 18 makes me look a little slimmer, but the 91 (LaCouture’s previous LSU number) is always with me,” LaCouture said. “What 18 brings is something that you don’t see every day. I grew up watching LSU and SEC football, so being able to wear a number like this at a program like this is definitely a dream come true.”

LaCouture, who graduated with a degree in sports administration in August of 2016, is currently working on his master’s degree in liberal arts, while Moore has a 4.0 GPA in LSU’s notoriously rigorous architecture program.

“Whether it’s on the field or in the classroom, there’s got to be a standard of excellence that’s consistent across the board,” Moore said. “A lot of the things that allow me to have success academically carry over to the field, whether it’s attention to detail, consistent effort, or sacrificing time to make time for what matters. There are a lot of parallels between the two, especially with architecture, because it’s so time-consuming and requires a lot of practice.”

There are still games left to be played this season, but LaCouture and Moore can’t help but reflect on their time in the Purple and Gold and what kind of legacy they’ll leave behind.

“I want to be remembered as a guy who went out there and gave it his all,” LaCouture said. “When my coaches told me something, I went out and did it. I want people to think of a hard worker and a leader. A guy who worked his tail off and never gave up.”

“Outside of just the number, when people look back at my time at LSU, I’d like for them to say I was a great teammate and a guy who did whatever he could for the team,” Moore added.

As their careers at LSU get closer and closer to the end, LaCouture and Moore will most certainly be remembered for all those things and more, setting an exemplary standard of leadership and dedication for the next generation of Tigers to wear the No. 18.