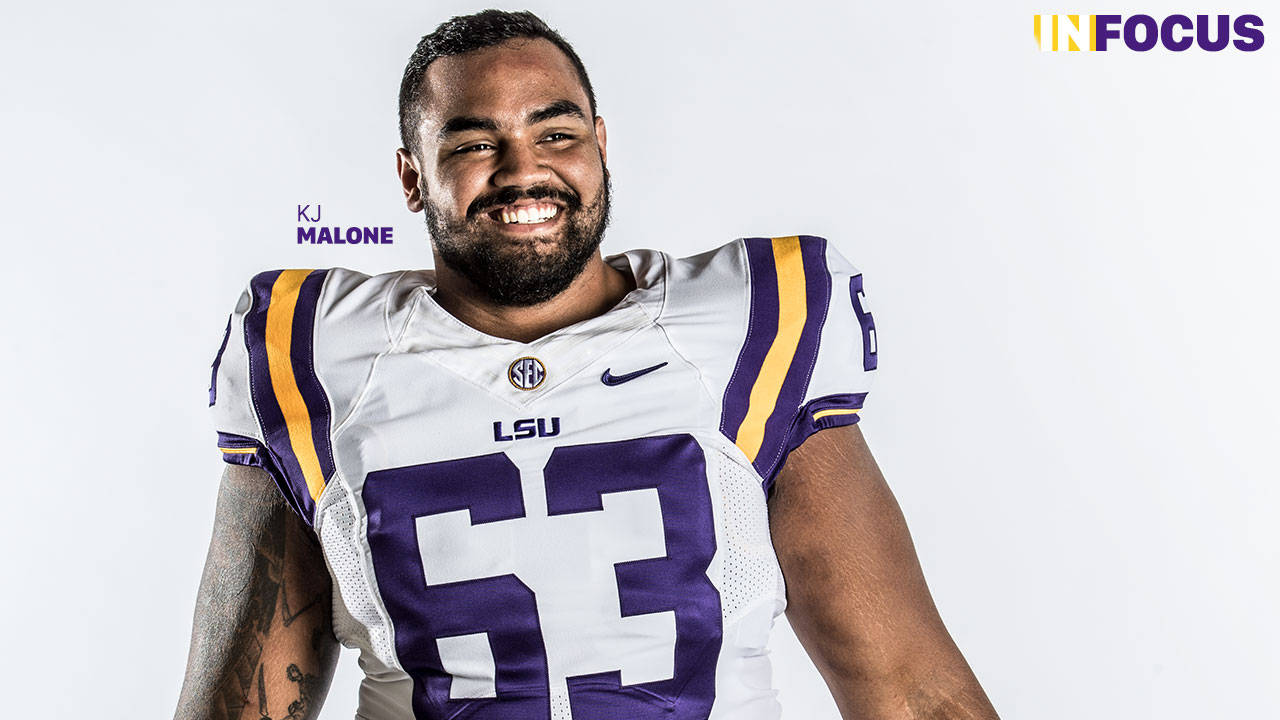 Down by one with the clock running, out only a few seconds left and one timeout, #4 LSU seemed to be in prime position to kick a field goal to beat Auburn by two points in their 2007 matchup. With the ball on the 23-yard line, the Tiger offense came out in I-formation in what everyone thought would be a run.

Suddenly, quarterback Matt Flynn took the snap and threw the ball into the end zone, where wide receiver Demetrius Byrd made a remarkable catch to win the game. The crowd erupted, the stadium shook, and it went down in history as one of those classic Saturday nights in Death Valley that the people of Baton Rouge have become so accustomed to.

In the stands sat a young KJ Malone, who was at the game with a friend and his dad. The first game he ever attended at LSU just so happened to be one of the greatest games to ever be played in Tiger Stadium.

Suffice it to say, he was hooked.

“I always grew up watching LSU and seeing the tradition they had here,” said Malone. “That is something that I will always remember. I just thought that being in their shoes in front of all these people would be amazing. It was my first game and it made me fall in love with LSU.”

However, he was not always a football die-hard.  Being the son of former NBA star and Hall of Famer Karl Malone, he naturally played basketball until he was in middle school.

“My dad told me that he wanted me to do something other than basketball, because he had already done it,” Malone said. “He also knew all the pressure that would be on me if I played basketball. I played basketball until I was in 8th grade. My first football practice, I got to hit someone really hard and I almost knocked them out. That is when I fell in love with it.”

Turns out he was pretty good at football. He would later go on to be a highly-recruited offensive lineman out of high school and eventually earned a scholarship to play at the school of his dreams.

“My first time in the weight room my freshman year, it was like 100 degrees,” Malone explained. “(LSU strength) Coach (Tommy) Moffitt and all of them were yelling at us. We did the warmup in 15 minutes and felt like we were dying. We thought that was the workout. I remember wondering how I was going to make it all four or five years.”

Now as a gritty veteran in the midst of his fifth year at LSU, Malone has played in 23 career games on the offensive line. Of all of those games, one in particular stands out the most as his favorite.

“I would say the Ole Miss game last year,” Malone said of LSU’s 38-21 win. “It was pure domination. It was one of the best games I had last year. There is just something about playing Ole Miss that I love.”

That is the same game in which Leonard Fournette ran for 284 yards, which was a school record at the time. It was a game that the offensive line was in sync and imposing their will on their opponent. Being a part of a group of linemen that have been together for years, Malone formed a brotherhood that makes it easy to play well with each other.

Malone has taken some of those freshmen under his wing and assumed a mentorship role with them. Especially with freshman Saahdiq Charles.

“Saahdiq said he looks up to me,” Malone said. “I just try to help him out as much as I can. When he is struggling, I just try to boost his confidence. That is something that I know I struggled with, and to know that Will or (LSU offensive line) Coach (Jeff) Grimes is there to tell me that I am doing well and that helps me. For Saahdiq, he’s like my little brother.”

Entering his final few games as a Tiger, Malone feels that he has left his mark on the LSU football program. He wants to be remembered for the hard work he put in.

“I want people to remember that I gave it my all and was the best leader I could be,” Malone said.