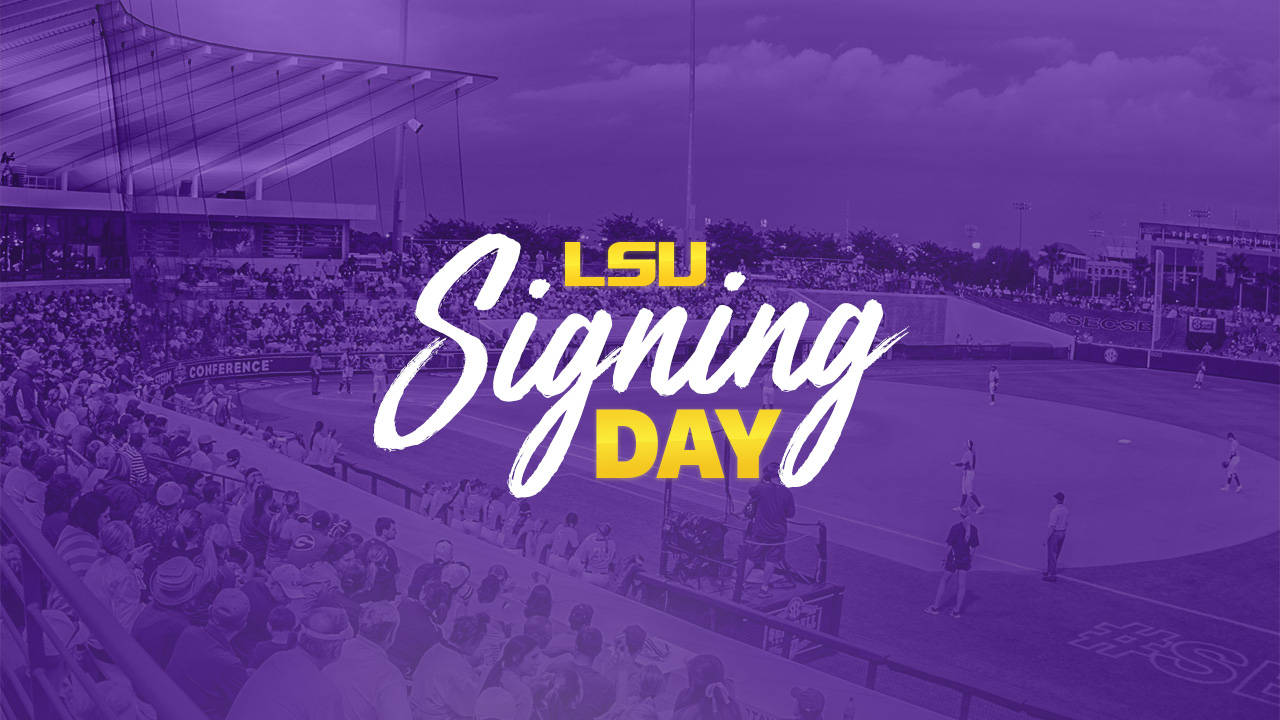 BATON ROUGE – Coming off of its third-consecutive Women’s College World Series appearance in June, LSU head softball coach Beth Torina and the Tigers announced the signings of eight to Nation Letters of Intent. The class will be freshman in the fall of 2018.

“We are excited to welcome a new class of Tigers to our program,” said Torina. “They are a very talented group and will surely add to our depth and continue to build on the rich tradition here at LSU.

“This class will fill a lot of positions for our team. They have speed, power, pitching, catching and will be able to make an immediate impact in several areas.”

Heading into her senior season at Stratford High School, Clark is an accomplished prep athlete through three years of high school and was recently rated 16th in the FloSoftball Hot 100. She is a three-time All-District performer and has earned All-State Second Team honors as a sophomore and Pre-season All-Greater Houston honors. Clark helped her team place in the top-10 at districts each of her three years. She hit .366 and had a 1.148 on-base percentage as a freshman to help her team to a second-place finish at districts and a Bi-District Championship to go along with area finalist.

As a sophomore, Clark hit .400 with 12 home runs to help her team finish 4th at districts, a bi-district championship, area champions, regional semi-finalist and was ranked ninth in the state. In her junior year, Clark put together a .479 batting average with a 1.470 on-base percentage to finish sixth at districts. During the summertime, she plays for the Texas Bombers, coached by Scott Smith. She is also an honor roll student and a member of the National Honor Society.

Cummins is a three-time letterman at Lakewood Ranch High School in Sarasota, Florida, who was recently ranked 131st in the FloSoftball Hot 200. The three-time All-State player hit .394 with eight home runs and a .734 slugging percentage to lead her team to a 27-3 record and a regional final. She led her team to the regional semifinal as a sophomore after hitting .324 with four home runs and 32 RBI. She also earned Defensive Most Valuable Player that season.

As a freshman, the 5-8 catcher hit .363 with 24 RBI and a home run which helped lead her team to the district quarterfinal. Cummings is currently on the Senior Advisory Board at Lakewood Ranch. She also has participated in weightlifting for two years. During the summertime, she plays for the Sarasota Heat and Georgia Impact, coached by Mark Dover and Patrick Lewis, respectively.

Houshmandzadeh is a three-year letterwinner coming to Baton Rouge from Cerritos, California. She started her prep career at Richard Gahr High School before transferring to Los Alamitas prior to her junior year. The outfielder led her team to a National Championship in Division I as a junior, finishing the season with a 27-3 record. As a sophomore and freshman, she helped her team to two-straight CIF semifinals appearances. She earned All-CIF First Team honors as a sophomore.

Houshmandzadeh is the daughter of former NFL wide receiver TJ Houshmandzadeh, who was drafted by the Cincinnati Bengals in the seventh round of the 2001 NLF Draft. He played college football for the Oregon State Beavers. Karrington is also a three-time honor roll selection. During the summertime, she plays for the California Explosion, coached by Bret Denio.

Kaliponen is a four-year letterwinner coming to Baton Rouge from Valor Christian High School in Highlands Ranch, Colorado, who was recently ranked 69th in the FloSoftball Hot 100. She helped lead her team to three-straight state championships as a freshman, sophomore and junior and a four-straight appearance at state as a senior. As the pitcher, she owned a 87-4 record. As a senior, she finished with her best ERA at 0.42 to go along with 273 strikeouts and just 12 walks in 134 innings pitched. As a junior, she threw a total of 149 innings and tallied 283 strikeouts, 18 walks and finished the year with a .47 ERA.

As a prep, she earned many accolades in her four years, including three-time all-state, all-region selections. She is a four-time Colorado Player of the year and a three-time Colorado Pitcher of the Year. As a junior, she was named the Colorado Softball Sportswoman of the Year by the YMCA and was a nominee for Xfinity Female Athlete of the Year for three-straight years. She also was nominated for Gatorade Player of the Year as a sophomore and junior. She earned National Player of the Week as a freshman and senior. During the summer time, Kaliponen plays for the TC Stars and Firecrackers-Rico, who are coach by Dave King and Tony Rico, respectively.

Perkins is coming to Baton Rouge from Metairie, Louisiana and has played her prep career at Mount Carmel, along with fellow signee Wickersham. She has helped lead her team to three first-place finishes at districts and a District 9 5A State Championship in 2017. As a junior she hit .511 with eight home runs, 30 runs scored and 13 stolen bases to earn the Offensive MVP, First Team All-Metro, NFCA South Team, All-Region, All-District and All-State honors.

During her sophomore season, she hit .523 with 39 runs scored, eight home runs and 10 stolen bases to help her team finish with a 21-5 record. She was selected as MVP, All-District, All-State and the District 9 5A MVP. As a freshman, she earned All-District, All-State and Second Team All-Metro after hitting .422 with 33 runs scored, four home runs and five triples. The team finished 22-4 and was first at the district tournament. She is also a three-time honor roll student. During the summertime, she plays for the Marucci Patriots, coached by Darryl Landry.

Stewart, who was recently ranked 56th in FloSoftball’s Hot 100, signs with LSU from Hillgrove High School in Marietta, Georgia. She helped her prep team to a top-5 region ranking in each of her four years and a Top 32, two Top 16 and a state runner up finish. She put together a high batting average in each of her years with the best of .515 coming as a junior. In that year, she had 53 hits and a total of 18 stolen bases. As a sophomore, she tallied 39 stolen bases.

Tidwell signs with LSU out of Gonzales, Louisiana where she attends St. Amant High School. She is a three-time letterwinner in both volleyball and softball and is also a three-time honor roll selection. She was recently ranked 176th in FloSoftball’s Hot 200. She has led her high school team to three-straight District Championships. In her junior season, she led the team to the quarter finals after hitting .499 to go along with .919 slugging percentage, .542 on-base percentage, nine home runs, 15 doubles and 63 runs scored to earn District MVP, First Team All-State, All-Metro and All-District honors.

As a sophomore, she earned First Team All-District, First Team All-Metro and Second Team All-State. She helped her team to the quarter finals and a district championship after hitting .504 with a .922 slugging percentage, a .542 on-base percentage, 10 home runs and 60 runs scored. In her first year at St. Amant, she was a First Team All-District, Second Team All-Metro and All-State Honorable Mention performer. She hit .443 and finished with a .516 on-base percentage with five home runs and 60 runs scored. During the summertime, she plays for the Marucci Patriots, coached by Darryl Landry.

Wickersham joins the LSU softball team from Mount Carmel Academy in Metairie, Louisiana, along with her fellow teammate Jordan Perkins. She was recently ranked No. 9 on FloSoftball’s Hot 100 list. In her junior year, she was a two-time state champion in volleyball and softball. She has pitched nine perfect games thus far in her career. As a junior, she earned the Advocate’s All-Metro MVP honor, along with LSCA All-State 5A Pitcher, Times Picayune All-Metro MVP/Pitcher of the Year, District 9 SA MVP. She helped her team to a 21-5 record and was first in districts. She finished the year with a 0.85 ERA with a 19-3 record, three no hitters and 192 strikeouts.

Wickersham is familiar with the LSU traditions as she is the daughter of former LSU quarterback Jeff Wickersham, who went on to play in the NFL for the Miami Dolphins in 1985. She is also very committed to her time in the classroom as she is the anticipated Valedictorian for 2018. She is also a National Honor Society member and a three-time honor roll student. During the summertime, she plays for the Marucci Patriots, coached by Darryl Landry.