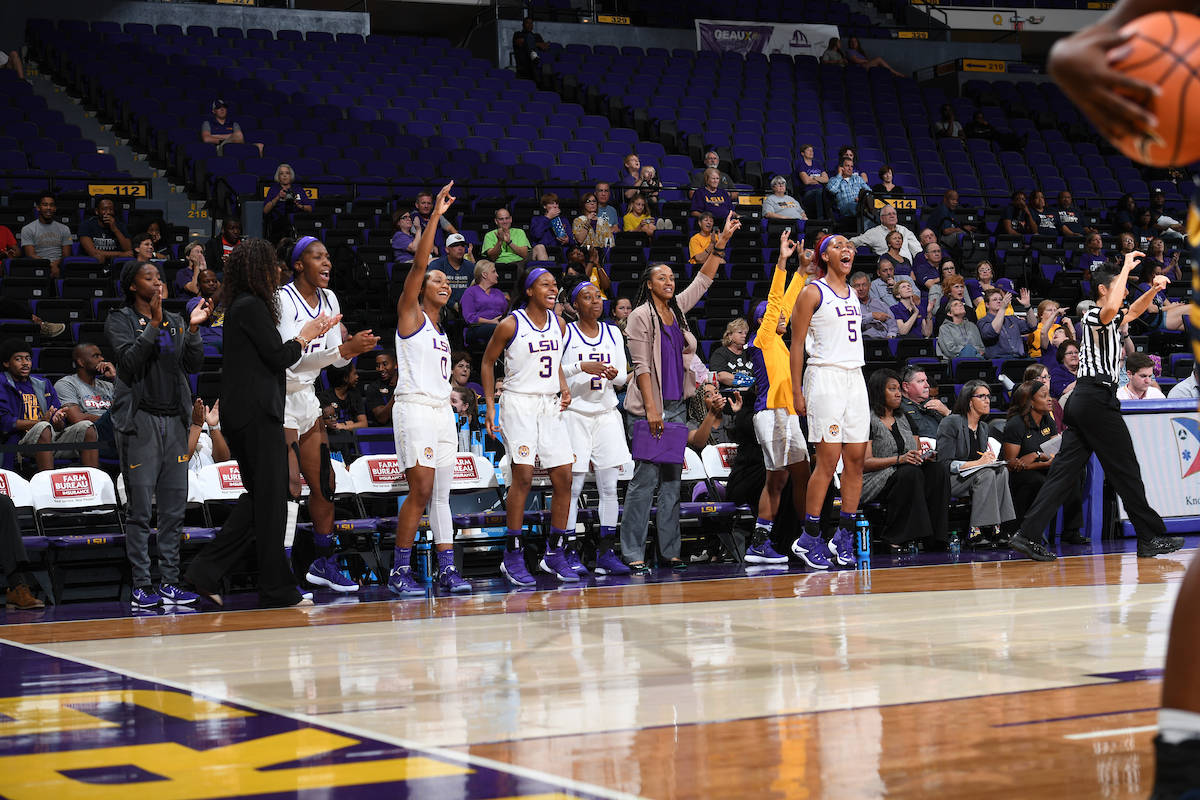 BATON ROUGE – The LSU women’s basketball team defeated the Mississippi College Lady Choctaws in a preseason exhibition game by the score of 96-34 on Sunday at the Pete Maravich Assembly Center.

The Lady Tigers were led by Ayana Mitchell‘s 17 points, while Raigyne Louis added 15 points, six assists and eight steals. Freshmen guards Jailin Cherry and Dekeriya Patterson made their presence felt as Cherry tied for the team lead in minutes played at 24 and added 12 points, three assists and a steal, while Patterson scored 14 points on 71 percent shooting.

The Lady Tigers immediately set a scorching pace to begin the game, scoring 20 unanswered points to jumpstart the first quarter behind the relentless defensive presence of Louis, who recorded six first-quarter steals, and the hot shooting of Cherry.

Sophomore Jaelyn Richard-Harris checked in and added a quick six points to give LSU a 27-3 advantage to close out the first quarter.

The offensive attack carried over to the second quarter, which began with an 18-2 run by LSU in less than five minutes as shots were falling from all over the court.

Holding Mississippi College to just 13 first-half points, the Lady Tigers applied constant pressure on the defensive side of the ball, tallying 18 combined blocks and steals against the Lady Choctaws while adding 49 points on the offensive side heading into the half.

LSU kept up its dominant play as the second half got under way, holding Mississippi College to just four points in the third quarter while posting 22 points thanks to Mitchell’s post scoring and the three-point shooting of Patterson, who was 4-of-5 from the beyond the arc on the afternoon.

Mitchell scored eight straight points to start the fourth quarter as the sophomore was able to get to the basket with ease, while the freshman trio of Patterson, Khayla Pointer and Raven Farley contributed valuable offense of their own to close out the game.

The Lady Tigers proved early and often that last season’s outstanding defensive reputation was no fluke, scoring 37 points off of 31 forced turnovers. Six different players recorded at least one steal, and the team was exceptionally aggressive on the defensive glass as Chloe Jackson pulled down 10 of LSU’s 29 defensive rebounds.

Offensively, the Lady Tigers shot 53 percent from the field and took advantage of an abundance of free-throw opportunities, converting on 23-of-25 from the line.

Fans should make plans to come early to the LSU home opener on Sunday, Nov. 12 against Southeastern Louisiana. LSU great Sylvia Fowles will have her jersey retired in a special pre-game ceremony at 1:30 p.m. Joining Fowles on that day will be her teammates from the 2006, 2007 and 2008 Women’s Final Four teams, who will be recognized at halftime. Tipoff for the game is set for 2 p.m. Tickets are available at LSUTix.net. Fans will receive a Sylvia Fowles replica jersey in honor of the LSU legend.

Fans can check out this season’s schedule of LSU women’s basketball promotions and giveaways at LSUSports.net/promotions. The schedule is highlighted by the annual Gold Game on Sunday, Jan. 7, Pack the PMAC on Sunday, Jan. 28, and the annual Play4Kay Pink Game on Thursday, Feb. 15. The annual Alumni Day game will be held on Mardi Gras weekend, Sunday, Feb. 11.