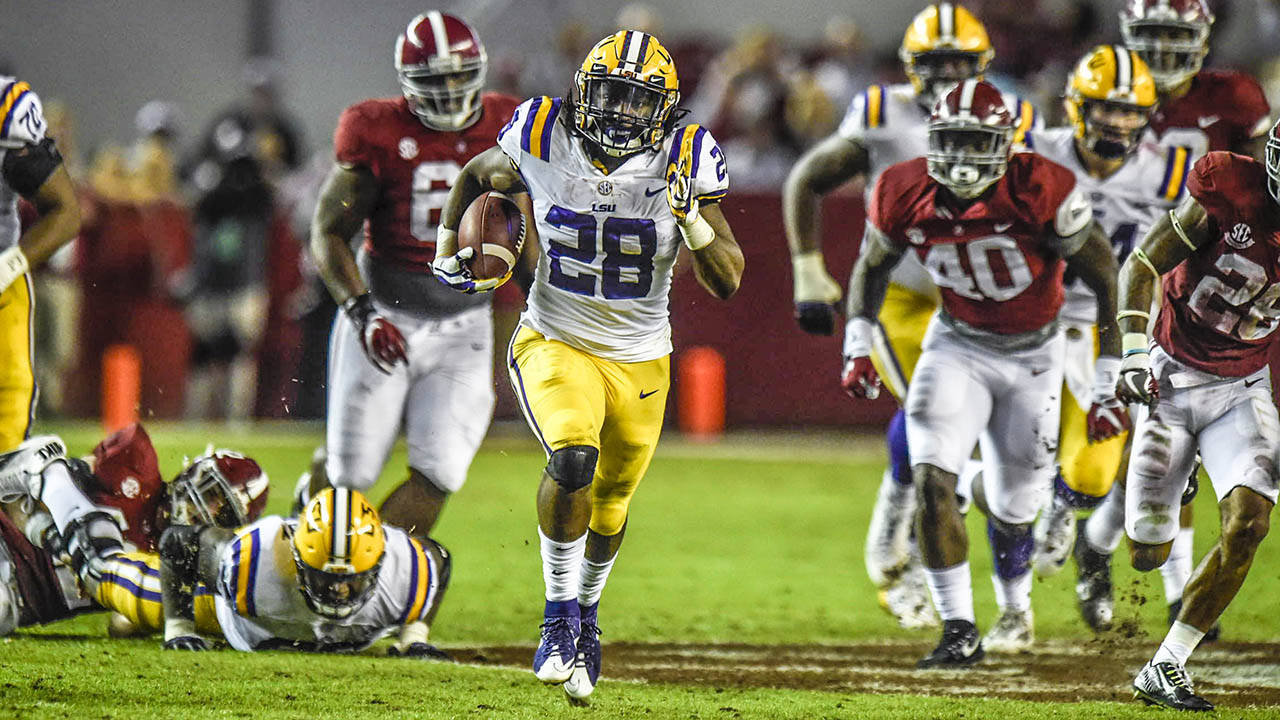 TUSCALOOSA, Ala. — No. 19 LSU put forth a valiant effort Saturday night, going on the road to face the nation’s No. 1-ranked team for the fifth time in history and hanging with Alabama throughout in 24-10 defeat.

However, the Tide took advantage of a turnover in LSU territory, LSU’s missed opportunity inside the Alabama 5-yard line, and a dropped 45-yard pass in the Tide redzone to earn the victory.

The Fighting Tigers defense came up huge, forcing the Tide into six three-and-out drives and coming up with four sacks and seven tackles for loss.

Linebacker Devin White led the way with nine tackles, while Arden Key had eight. Each earned a half-sack, with Corey Thompson and Christian LaCouture each getting another.

Offensively, LSU chipped away at an Alabama defense which ranks among the nation’s best. Quarterback Danny Etling finished 12-for-26 passing for 137 yards, while Myles Brennan entered for the final drive and completed 3-of-5 passes for 18 yards. The Tide had six sacks, though LSU’s offensive line that included two true freshmen held up admirably.

Highlighted by a 54-yard run to the Alabama 2, LSU’s Darrel Williams ran seven times for 83 yards with a touchdown. Derrius Guice carried 19 times for 71 yards.

Alabama quarterback Jalen Hurts made the biggest impact against LSU’s defense, generating 183 yards on 11-of-24 passing with a touchdown while running 14 times for 44 yards and a score. Bo Scarbrough had only 39 yards on 11 carries and also scored from short yardage.

Tide punter JK Scott changed field position throughout the contest, punting eight times for a 51.6 average with six inside the LSU 20.

On Nov. 11, LSU returns to action when Arkansas visits Tiger Stadium in a rare morning kickoff. The game is scheduled for 11 a.m. CT on ESPN.

Tickets are available at www.LSUtix.net.

LSU won the coin toss and deferred to the second half, electing to kickoff to Alabama. The move paid off, as defensive end Christian LaCouture came up with a 10-yard sack of Hurts and the Tide punted after coming up short of the down to gain.

Though a 31-yard pass from Etling to Stephen Sullivan kept LSU’s first drive moving, the Tigers didn’t get the benefit of contact with DJ Chark deep in Bama territory and punted.

Alabama overcame a 5-yard loss on a tackle in the backfield by LSU’s Arden Key on the first play and marched 90 yards to put points on the board. A 47-yard pass from Hurts to Henry Ruggs III setup a 4-yard touchdown pass to Irv Smith Jr. With 6:08 to play in the quarter, Alabama led 7-0.

Another sack of Hurts – this time by Corey Thompson – led to another Alabama punt. However, Etling’s first-down pass on the ensuing drive was behind Guice and intercepted by Ronnie Harrison at the LSU 37.

After switching fields, Alabama converted on third-and-6 with a 24-yard pass from Hurts to Ridley. Bo Scarbrough scored a 9-yard touchdown to give the Tide a 14-0 lead off the Tigers turnover.

LSU answered with a solid 13-play, 71-yard drive that ended at the Alabama 4-yard line with Connor Culp‘s 21-yard field goal that cut the Tigers deficit to 14-3 with 8:38 left in the half.

Etling completed third-down passes of 13 yards to Sullivan, 21 and 23 yards to Chark to keep the Tigers’ drive alive. However, a third-and-4 pass into the endzone was batted away.

The Tigers defense came up with a three-and-out including a tackle and a hurry by Key. An illegal block by LSU negated a punt return by Chark into Alabama territory.

Though LSU picked up a first down with a 13-yard run by Darrel Williams, a sack of Etling on third-and-5 ended the drive at the LSU 29. Under pressure, redshirt freshman Zach Von Rosenberg unloaded a career-best 52-yard punt to switch the field with 4:09 left in the half.

Hurts scrambled for a first down to the Alabama 43, but the Tide was stopped at midfield when Corey Thompson chased down Hurts three yards short of the first-down marker on third-and-10.

With the second half kickoff coming their way, LSU picked up a first down and ran out the first-half clock trailing 14-3.

As Guice cruised into sixth place on LSU’s all-time rushing list (passing Joseph Addai, 2,576), LSU managed a first down before a 1-yard sack of Etling and a stuffed QB draw ended the first drive of the half at the LSU 42-yard line.

Von Rosenberg punted 40 yards to the Alabama 23, where LSU’s defense forced another three-and-out.

Deep it its territory after another terrific punt by Alabama’s JK Scott, LSU wasn’t able to manage a first down and punted from its 17. The 39-yard effort gave Alabama excellent field position at its 44.

With the Tide’s offense stuck in neutral since early in the second quarter, Hurts went to the air to get back onto the scoreboard. He connected with Ridley for 31 and 22 yards to the LSU 3 before taking the ball across the goalline himself.

LSU answered with its first touchdown of the contest. After starting the drive with an 11-yard screen pass to Guice, Williams took a direct snap up the middle for a career-long 54 yards to the Alabama 2. Two plays later, Williams scored to cut the deficit to 21-10 with 1:48 on the clock.

A 21-yard pass by Hurts to Smith on third-and-3 helped setup a 40-yard field goal by Alabama’s Andy Pappanastos. The kick pushed the Tide’s advantage to 24-10 with 13:25 to play.

After Williams picked up a first down on the ensuing drive, Etling looked 50 yards down the field for Chark, who was unable to handle the pass at the Alabama 18. Backed up following a penalty, LSU punted 49 yards.

Once again, LSU’s defense came up with a three-and-out of the Tide and the Tigers offense returned to the field at its 17 after Scott’s 58-yard effort with 9:10 to play.

Etling completed a 16-yard pass to Derrick Dillon on third-and-5, but was later sacked on third-and-6 to send the punting unit back onto the field. Von Rosenberg punted 37 yards to the Alabama 38 with 6:22 to play.

Alabama was willing to allow its offense to run time off the clock, punting after three plays.

Myles Brennan entered for the Tigers’ final offensive drive of the game.