Volleyball Bounces Back with Road Win Over Arkansas 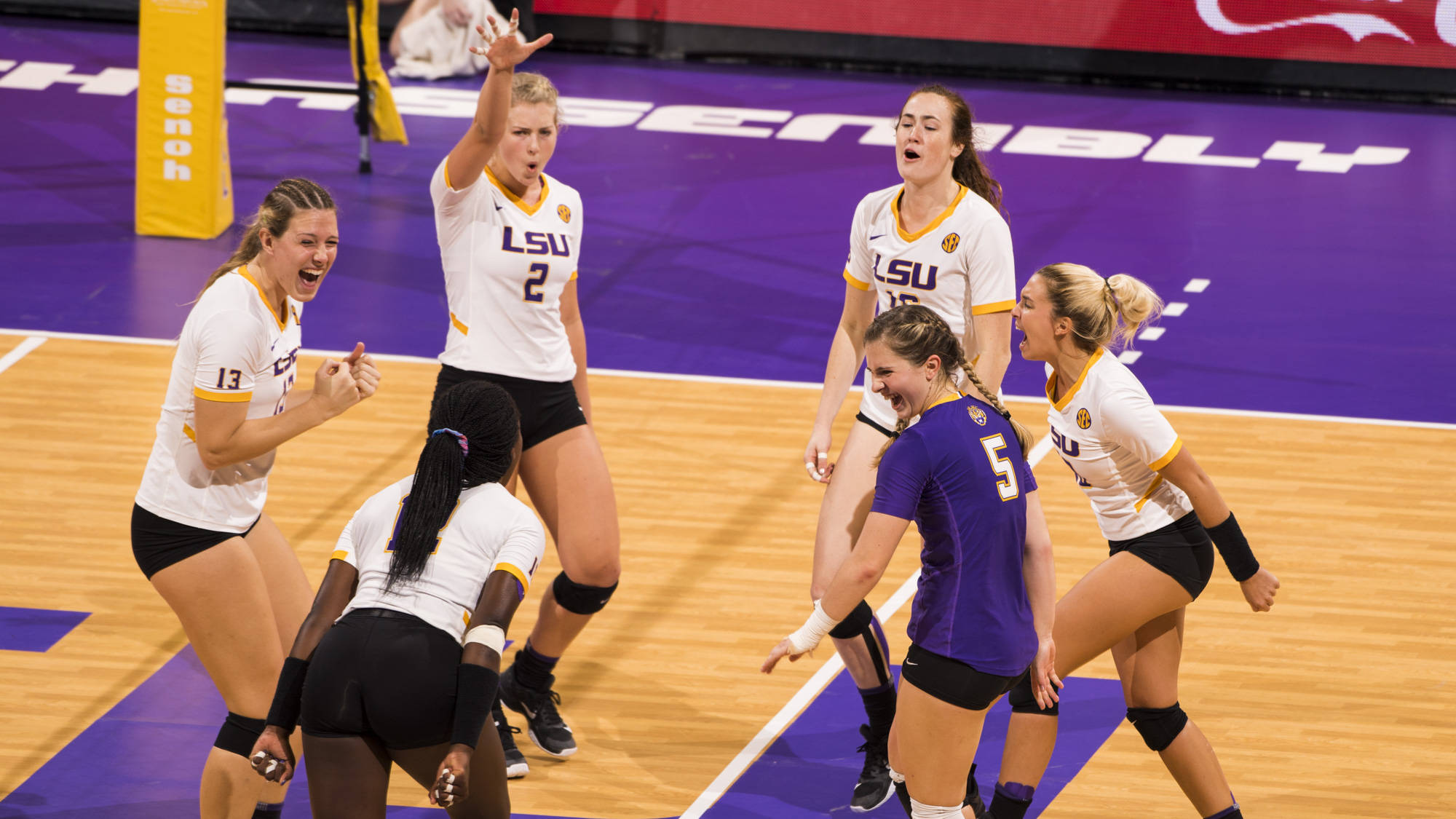 Sophomore Jacqui Armer led the squad with a career-high 18 kills and a career-high .593 hitting percentage. She recorded just two errors in 27 attacks and finished with seven blocks. Junior Olivia Beyer added 14 kills and senior Gina Tillis recorded her 10th double-double on the season of 11 kills and 19 digs. Freshman Raigen Cianciulli registered a match-high 27 digs and sophomore Anna Zwiebel put together her eighth double-double of 53 assists and 14 digs.

Fran’s Final Thoughts
“This team continues to fight and be resilient. This was a tough match and Arkansas is a quality opponent. We had some special performances, but the best thing that happened tonight was that everybody did their job. We were balanced enough and we were able to rely on our middles. Raigen (Cianciulli) did a great job of keeping the ball off the floor. Everybody contributed and that is what we have to do. We were balanced and it is nice to have that back.”

Opening Set
LSU fell behind early 7-3 to the Razorbacks but went on a 4-0 run to tie up the set 7-7. The teams went point-for-point and tied up the set again 11-11 but Arkansas went on a 4-1 run to take a 15-12 lead at the media timeout. Arkansas pushed its lead 18-14 but LSU came back with two straight points to bring them within two, 18-16. The Razorbacks pushed their lead again with a 3-0 run and had set point at 24-18. The Tigers held off the Razorbacks for two set points but they fell 25-21.

Set Two
The Tigers started the second set strong, getting out to a 9-4 lead and forcing the Razorbacks to take a timeout early. LSU extended its lead to 18-10 after a 9-6 run. The Tigers went on a 3-0 run to take a 21-12 lead and force Arkansas to a timeout. Out of the timeout, the Razorbacks fought back by coming within five but an Olivia Beyer kill shut them down to even the match at 1-1.

Set Three
LSU got out to a 4-1 lead to start the third set. The Razorbacks worked their way back and took an 11-9 lead, forcing LSU to a timeout. LSU fought back and took the lead at 12-11 after a 3-0 run. The set was tied up at 16-16 and three more times after that before the Tigers took a 21-19 lead. The Razorbacks went on a 3-0 run to take a 22-21 lead. The Tigers took a timeout, regrouped and scored two straight points to retake the lead, 23-22. The two traded the next two points before Jacqui Armer‘s 15th kill gave the Tigers a 2-1 lead on the match.

Set Four
After giving the first three points to the Razorbacks, the Tigers regrouped and went on a 6-1 run to take a 6-4 lead. The set was tied up four times before the Razorbacks went on a 3-0 run and took a 15-13 lead into the media timeout. The Tigers went on a 6-1 run to go up 19-16 and forced Arkansas to a timeout. Arkansas fought back and tied up the set at 22-22 and took a 23-22 lead on the next point. The Tigers tied it up at 23-23 but Arkansas went ahead again 24-23, sitting on match point. The Tigers fought back and rallied for three-straight points. The final point of the match was challenged by head coach Fran Flory. The officials ruled the point to the Tigers, claiming the set 26-24 and the match 3-1.

Notes
>> With the win, the Tigers defeated Arkansas twice on the year. It’s the first time the Tigers have defeated the Razorbacks twice in a season since 2014.

>> This was the first victory for LSU in Fayetteville since the Tigers won on Nov. 2, 2014.

>> This is the 17th match that Cianciulli has led the team in digs. Her 27 digs is the second-most she has recorded in a match this season.

Next Up
The Tigers continue their road trip this weekend, heading to Missouri. The Tigers will face Mizzou Sunday at 1 p.m. in the Hearnes Center. The match will air on the SEC Network+. Fans can access the match on at WatchESPN.com or by using the app.