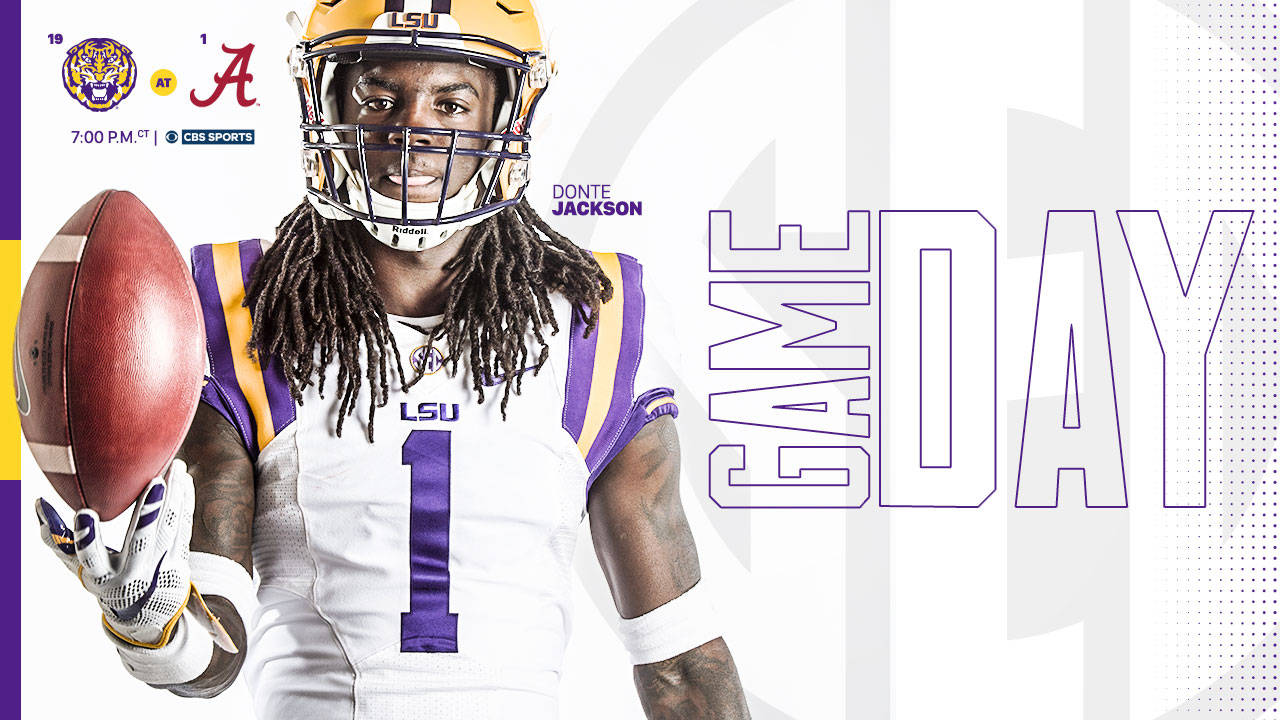 BIRMINGHAM – A well-rested and healthy LSU football team will face its biggest test of the season on Saturday when the 19th-ranked Tigers face top-ranked and undefeated Alabama in a game that historically has gone a long way in determining supremacy in the Southeastern Conference Western Division.

Kickoff between the top two programs in the SEC over the last decade is set for 7 p.m. CT in a sold out Bryant-Denny Stadium in Tuscaloosa. The game has annually become one of the most anticipated regular season games in the league each year and will once again serve as the primetime CBS telecast with Brad Nessler (play by play), Gary Danielson (analyst) and Allie LaForce (sideline reporter) on the call. The game can also be seen on mobile devices on the CBS Sports app.

LSU, winners of three straight conference games, brings a 6-2 overall and a 3-1 league record into the contest. The Tigers still control their destiny in the SEC Western Division and a win over the Crimson Tide will put the Tigers in the driver’s seat in the west. LSU is bowl-eligible for a school-record 18th straight year, a streak that dates back to the 2000 season.

In consecutive games, the Tigers have rallied from a 20-0 first half deficit to beat Auburn; beat Florida in Gainesville; and racked up nearly 600 yards of offense, including 276 on the ground from Derrius Guice, in a road win over Ole Miss.

Alabama, who is ranked No. 1 in the Coaches and Associated Press polls, is No. 2 in this week’s College Football Playoff Standings. The Crimson Tide stand at 8-0 overall and 5-0 in conference play.

LSU has historically played well in Tuscaloosa, winning five out of eight times against the Crimson Tide in Bryant-Denny Stadium going back to 2001. LSU has won twice in Tuscaloosa in overtime during that span (2005 and 2011). The teams also went to overtime in Tiger Stadium in 2014. Last year, in Baton Rouge, the game was scoreless after three quarters before Alabama won 10-0.

Tomorrow marks the 12th straight meeting between the teams that both LSU and Alabama go into the contest ranked in the Top 25, a streak that dates back to 2007 when the Tigers beat the Crimson Tide, 41-34, in Tuscaloosa.

This week, it’s been business as usual for the Tigers as LSU used the open date for self-scouting followed by a productive week on the practice field leading up to tomorrow’s game.

“We had a tremendous week,” LSU coach Ed Orgeron said after Thursday’s practice. “This will be a tremendous challenge for the Tigers, but we are ready for it. I feel like we are well-rested from the open date. You can tell it is Alabama week as there has been a different vibe around here. We will be ready to go come Saturday night.”

According to Orgeron, the key to having success against Alabama is executing and being sound in every phase of the game. He also warned that performing well on Saturday takes a process of good practices and mental preparation in the film room throughout the week.

“We have to execute, be in the right place at the right time, all of the time,” Orgeron said. “We have to match their intensity level and we need to be solid in all that we do.

Another key to LSU’s success is protecting quarterback Danny Etling, who has gotten better with each game this year. Etling, who will be making his 19th straight start, ranks third among all starters in the SEC in passing efficiency. Etling has completed 93-of-155 passes for 1,452 yards, nine touchdowns and just one interception.

The Tigers will look to running backs Guice and Darrel Williams to help balance the offense. Guice, who ranks second in the SEC with 101.6 yards per game, is completely healthy and is coming off his best performance of the season in LSU’s last outing two week ago against Ole Miss. Williams has also been productive, becoming the only player in LSU history with 100 yards rushing and receiving in the same game, which he accomplished in the win over the Rebels. Williams has 476 rushing yards and ranks second on team with 16 receptions for 234 yards.

The Tigers, who are averaging 27.4 points and 417.8 total yards (216.2 rushing, 201.5 passing), are one of just three teams – along with Alabama and Auburn – in the league averaging 200 yards a game both rushing and passing. Defensively, Alabama ranks atop the league in nearly every major defensive category, including points allowed (9.8), total yards allowed (236.0), and rushing yards allowed (66.4).

The Tiger defense will be tasked with slowing down sophomore quarterback Jalen Hurts, who can make plays with both his arm and his feet. Hurts has rushed for 572 yards, thrown for 1,223 yards and accounted for 15 touchdowns (6 rushing, 9 passing). The Tide has a stable of running backs led by Damien Harris (697 yards, 10 TDs) and Bo Scarbrough (377 yards, 6 TDs) and their top receiver is Calvin Ridley (41 rec, 523 yards, 2 TDs).

Special teams could also play a factor in the contest and the Tigers feature one of the top punt returners in the league in DJ Chark, who has returned two punts for TDs this year. LSU kicker Connor Culp kicked four field goals against Ole Miss and has made seven straight going into the Alabama game.

After Saturday, the Tigers return home to face Arkansas at 11 a.m. on November 11, followed by a road game against Tennessee on November 18 and then the regular-season finale against Texas A&M in Tiger Stadium on November 25.