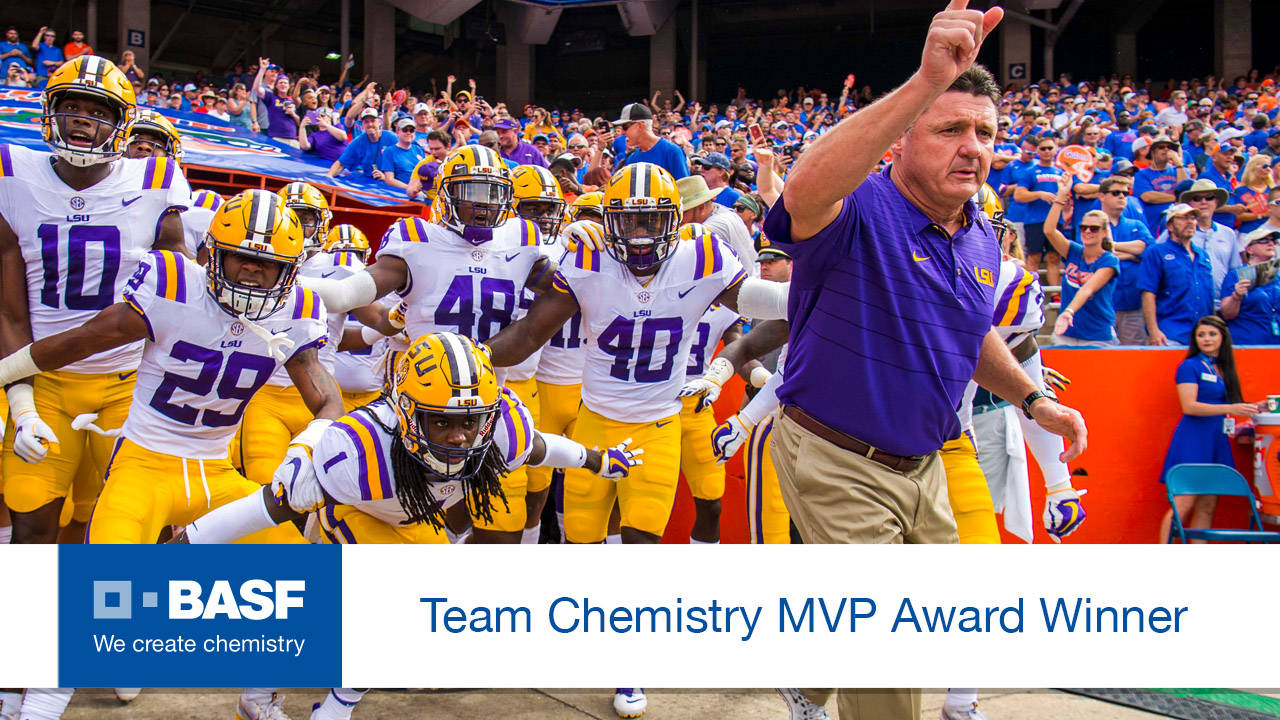 BATON ROUGE – With a thrilling win at “The Swamp,” a 20-point comeback over 10th-ranked Auburn in Tiger Stadium and its most dominant performance to-date this season at Ole Miss, the LSU Football team was an easy selection for the BASF Team Chemistry MVP Award for the month of October.

The Tigers used their perfect 3-0 record last month to climb back into the national rankings at No. 19 in the AP Top 25 ahead of Saturday’s SEC West showdown at No. 1-ranked Alabama in Tuscaloosa.

LSU spoiled Florida’s homecoming with a dramatic 17-16 win in Gainesville back on Oct. 7 as the Tigers sacked Gators quarterback Felipe Franks five times while linebacker Devin White led the unit with 13 tackles on the day for his fourth-straight game with double-digit tackles. White also batted down a fourth-down pass with time ticking away to secure the victory as the Gators have yet to recover with three-straight SEC defeats.

Facing a 20-0 deficit in the second quarter of their home clash with Auburn the following week, the Tigers’ offense came to life for a 27-23 win for the greatest comeback in an SEC game in Tiger Stadium history.

Wide receiver Stephen Sullivan put LSU on the board with a 1-yard touchdown run on fourth down to cut the deficit to 20-7 at the 9:19 mark of the second quarter before Auburn responded with a field goal to retake a 16-point lead late in the half. But Russell Gage‘s diving grab in the North end zone on the 14-yard fade pass by quarterback Danny Etling with just 32 seconds to play gave LSU the momentum at the break.

DJ Chark‘s legendary 75-yard punt return early in the fourth quarter cut the Auburn lead to just two points, while Connor Culp nailed field goals of 46 and 32 yards down the stretch to complete the historic comeback in Tiger Stadium. White again led the defense with a career-high 15 tackles.

There would be no let down on head coach Ed Orgeron‘s return to Oxford on Oct. 21 as the Tigers brought home a dominant 40-24 win over the Ole Miss Rebels to run their record to 6-2 overall and 3-1 in the SEC.

All-American running back Derrius Guice ran wild to the tune of 276 yards on 22 carries for a 12.5 yards-per-carry average and one touchdown to lead the charge. Guice became the first player in SEC history to record at least three 250-yard rushing games in a career, surpassing the likes of Bo Jackson and Hershel Walker with two such games apiece.

Fellow running back Darrel Williams carved his own place in history as the first LSU player with at least 100 yards both rushing and receiving in the same game as he added 103 yards on the ground and 105 yards through the air in the win. Etling was again efficient with 200 yards and two touchdowns on 9-of-13 passing on the night.

No letdown here. The Tigers came to play in Oxford! 💪💪 pic.twitter.com/nRHXqRADmn

The 19th-ranked Tigers look to take their momentum to Bryant-Denny Stadium in Tuscaloosa this weekend as they face the top-ranked Alabama Crimson Tide on Saturday night at 7 p.m. on CBS. They return home next week as they welcome Arkansas to Tiger Stadium on Nov. 11 for an 11 a.m. CT kickoff.