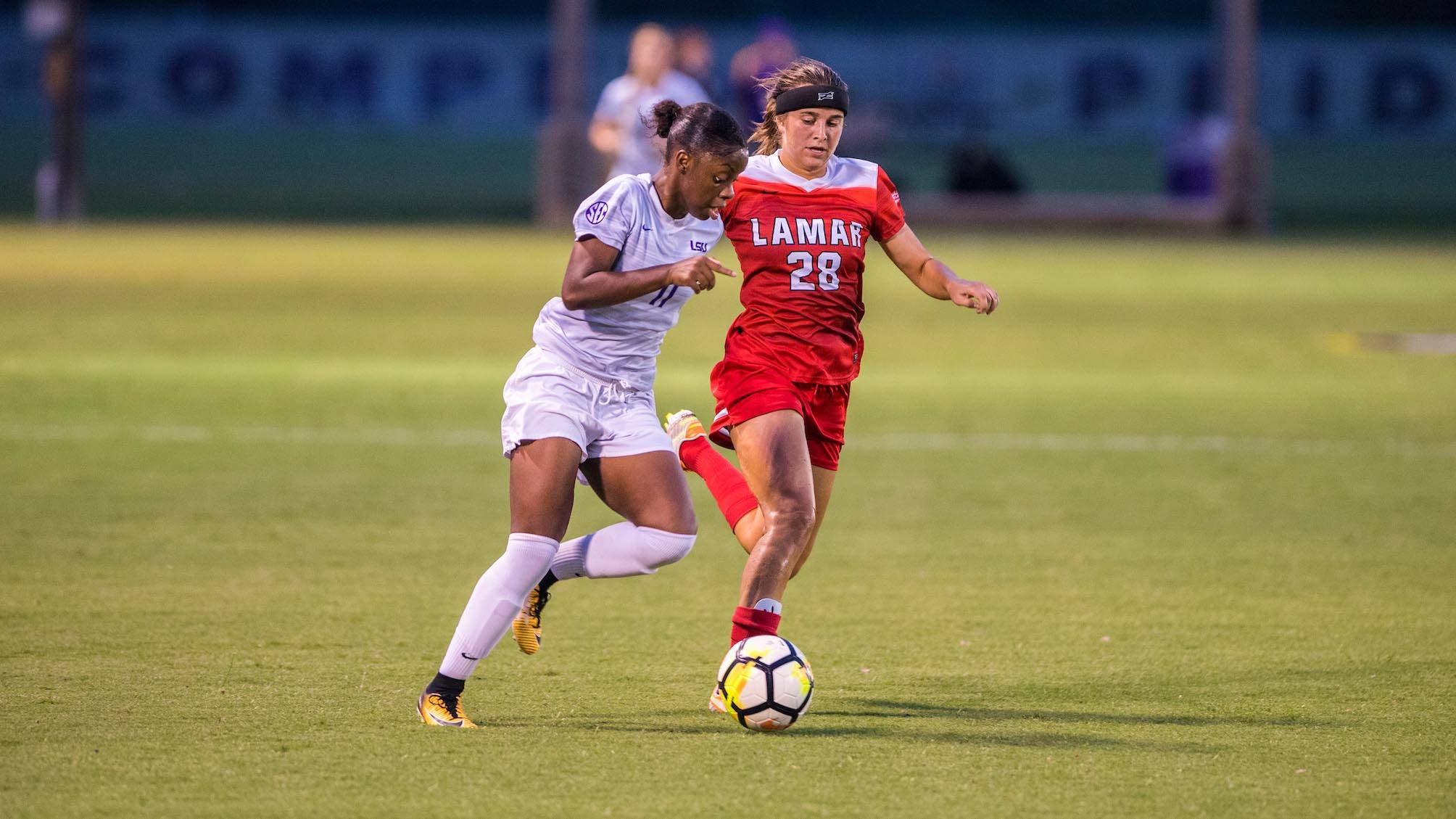 WASHINGTON, D.C. – Tinaya Alexander and Zoe Higgins scored their third goals of the season just 15 minutes apart early in the first half and the Tiger defense held up the rest of the way to lead the LSU Soccer Team to a 2-0 away win at George Washington on Thursday at the Mount Vernon Athletic Complex.

The Tigers (4-0) continued their red-hot start to the 2017 season while winning their fourth-straight match to start the campaign and avenging their 3-1 home defeat to the Colonials (0-2-1) a season ago.

While holding each of their first four opponents off the scoreboard to start the season, the Tigers have set a new program record for consecutive minutes without conceding at 420 minutes dating back to Oct. 27, 2016, when Arkansas last found the net in the 30th minute in the season finale. It was 22 years ago when LSU last held its opponents scoreless for 365 minutes during the 1995 season.

“George Washington is a good team. It’s always difficult to go on the road and get wins at this level, so we’re excited to go back home with the win,” said LSU head coach Brian Lee. “We’ve shown great character so far this season with the way we’ve carried ourselves on and off the field, and tonight was another example of that.”

The Tigers struck quickly once again as Alexander opened the scoring six minutes from the opening kickoff with her third goal of the season. She took possession from fellow freshman Lucy Parker down the right flank and tied her defender in knots before finishing with her left foot inside the left post from the edge of the six-yard box.

LSU has now found the breakthrough inside of 17 minutes in each of their four matches this season after Alexander herself scored 17 minutes into her debut en route to a 5-0 home win over Mississippi Valley State on Aug. 18. Senior Nicole Howard found the net 10 minutes into LSU’s 3-0 away win at Colgate on Aug. 20 before junior Alex Thomas scored eight minutes from kickoff in a 2-0 home win over Lamar on Aug. 25.

“We basically switched play coming from the left-hand side to the right-hand side. Lucy (Parker) found me out wide. I saw a 1-v-1 situation, and Brian always tells me to go forward when I’m in that position, so I did and got the goal,” Alexander said. “To get off to an early start and get a goal early in the game gives us motivation to continue throughout the game and score more goals.”

Alexander then turned provider when she got end line and picked out Higgins for the one-time finish inside the six-yard box to double LSU’s lead in the 21st minute. Higgins equaled Alexander with her third goal of the season, while Alexander served up her fourth assist in four matches.

Parker and Howard both fashioned chances for themselves in the fourth and 20th minutes, respectively, while sophomore Jade Clarke stung the post with a blistering effort from inside the box just seconds after entering the lineup in the 41st minute.

Junior goalkeeper Caroline Brockmeier collected another six saves in the match for her fourth clean sheet of the year as she moved into the No. 6 spot on LSU’s career list with her 11th shutout as a Tiger.

Brockmeier was certainly tested in the latter stages as she first denied the Colonials in the 65th minute on Deena DeSilva’s curling free kick from 25 yards in front of goal. The hosts nearly struck again on 73 minutes with a shot against the bar and rebound on frame with Brockmeier positioned well to tip it over for a corner kick. The junior from Tallahassee, Florida, has now saved all 22 shots on target she has faced on the year.

With Sunday’s home match against Houston canceled due to the effects of Hurricane Harvey, the Tigers will return to action next week with their trip to Orlando, Florida, to face No. 24-ranked Central Florida on Friday, Sept. 8, with kickoff scheduled for 6 p.m. CT. They open up a three-game homestand on Sunday, Sept. 10, while playing host to Liberty at 6 p.m. CT at the LSU Soccer Stadium.