Soccer Back on the Road at George Washington 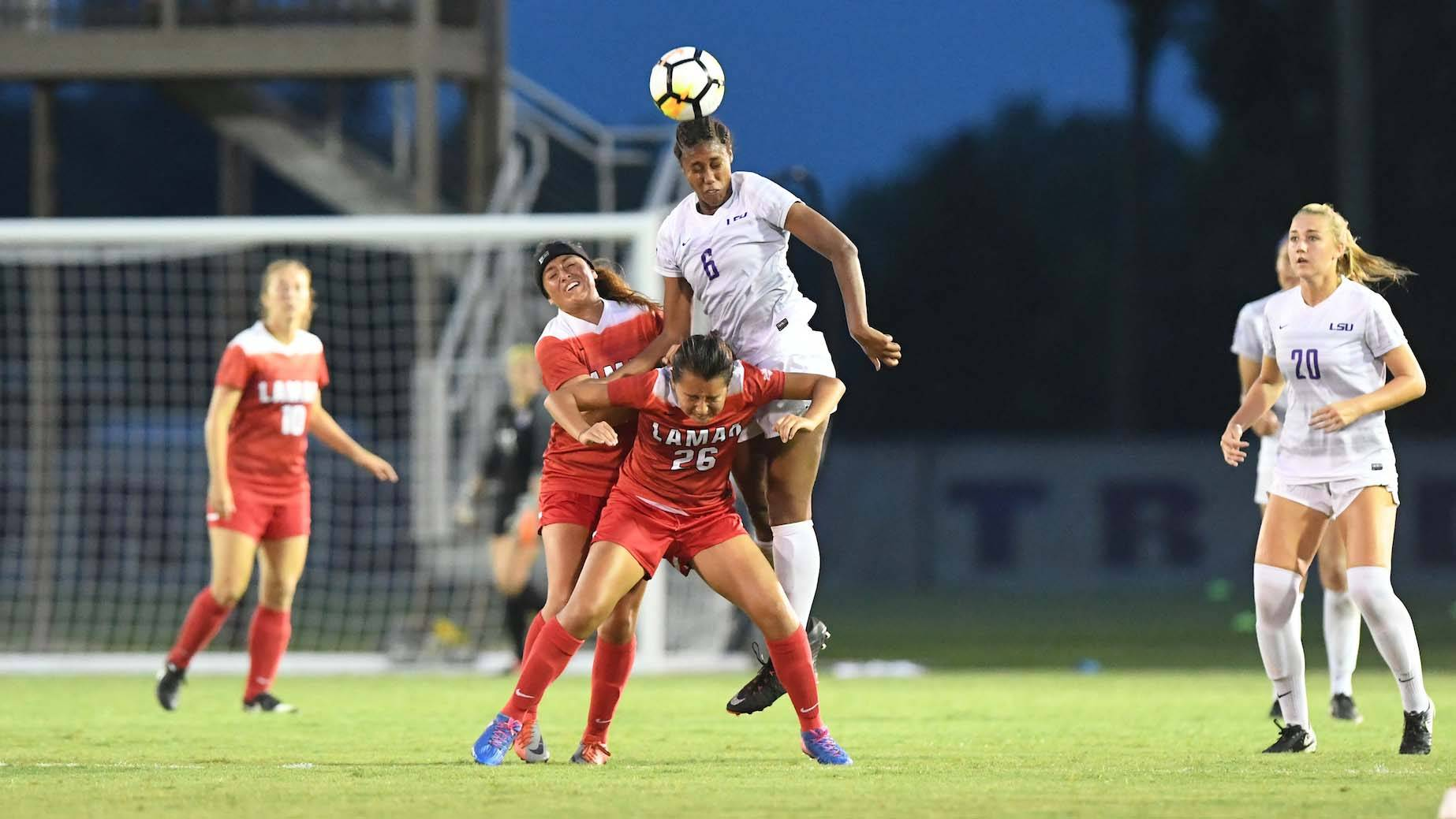 BATON ROUGE – With three-straight wins to the start the season, the LSU Soccer team will put its unbeaten record to the test Thursday afternoon with an away trip to Washington, D.C., where it squares off against George Washington in a match set to kick off at 4 p.m. CT at the Mount Vernon Athletic Complex.

The Tigers are off to their first 3-0 start since 2008 and have opened a season with three wins on the spin for the sixth time in team history. They most recently defended their home field with a 2-0 defeat of Lamar last Friday night after opening the season with a 5-0 home win over Mississippi Valley State on Aug. 18 and a 3-0 away win at Colgate on Aug. 20.

The Colonials (0-1-1) were 3-1 winners in the inaugural meeting between the sides in Baton Rouge a year ago and are just two seasons removed from winning the Atlantic-10 Championship with a perfect 10-0 record in conference play and a 15-5 overall mark in 2015.

George Washington will provide live streaming video of Thursday’s match through the Atlantic-10 Conference’s subscription service at http://www.atlantic10.com with 24-hour passes available for $6.95.

Fans can also receive live updates when the Tigers and Colonials face off on Thursday by following @LSUSoccer on Twitter at http://twitter.com/lsusoccer and Instagram at http://instagram.com/lsusoccer and by liking the LSU Soccer page on Facebook at http://facebook.com/lsusoccer. George Washington will also provide live stats through its official athletics website at http://www.gwsports.com.

“George Washington is a championship-caliber program that has certainly enjoyed great success in recent years,” said LSU head coach Brian Lee. “Sarah Barnes has built the best program in the A-10 in a very short time and a program with the ability to compete on a national level. We’ll have to be at our very best and compete for 90 minutes or more to get a result tomorrow night.”

Senior Brittany Cooper is George Washington’s top returning scorer from a year ago as she bagged two goals in the Colonials’ 3-1 win over LSU in Baton Rouge last fall. The Colonials also welcome back 2015 A-10 Rookie of the Year Sofia Pavon to the lineup after the all-conference midfielder missed the 2016 season through injury.

Cooper set up Pavon for the opener in the 18th minute of George Washington’s 1-1 draw with Liberty last Thursday night before the Flames leveled in the 88th minute at the Mount Vernon Athletic Complex.

LSU is off to a quick start to the season thanks to a prolific attack and stingy defense while outscoring its opponents 10-0 through three matches. Senior Zoe Higgins, junior Alex Thomas and freshmen Tinaya Alexander and Dana Reed have netted two goals each to lead the line, while senior Nicole Howard and freshman Lucy Parker have added a goal apiece.

Junior goalkeeper Caroline Brockmeier has saved all 16 shots on target she has faced by LSU’s opponents to-date while keeping three clean sheets with a 0.00 goals against average in 270 minutes on the year.

With Sunday’s home match against Houston canceled due to the effects of Hurricane Harvey, the Tigers will return to action next week with their trip to Orlando, Florida, to face No. 24-ranked Central Florida on Friday, Sept. 8, with kickoff scheduled for 6 p.m. CT. They open up a three-game homestand on Sunday, Sept. 10, while playing host to Liberty at 6 p.m. CT at the LSU Soccer Stadium.