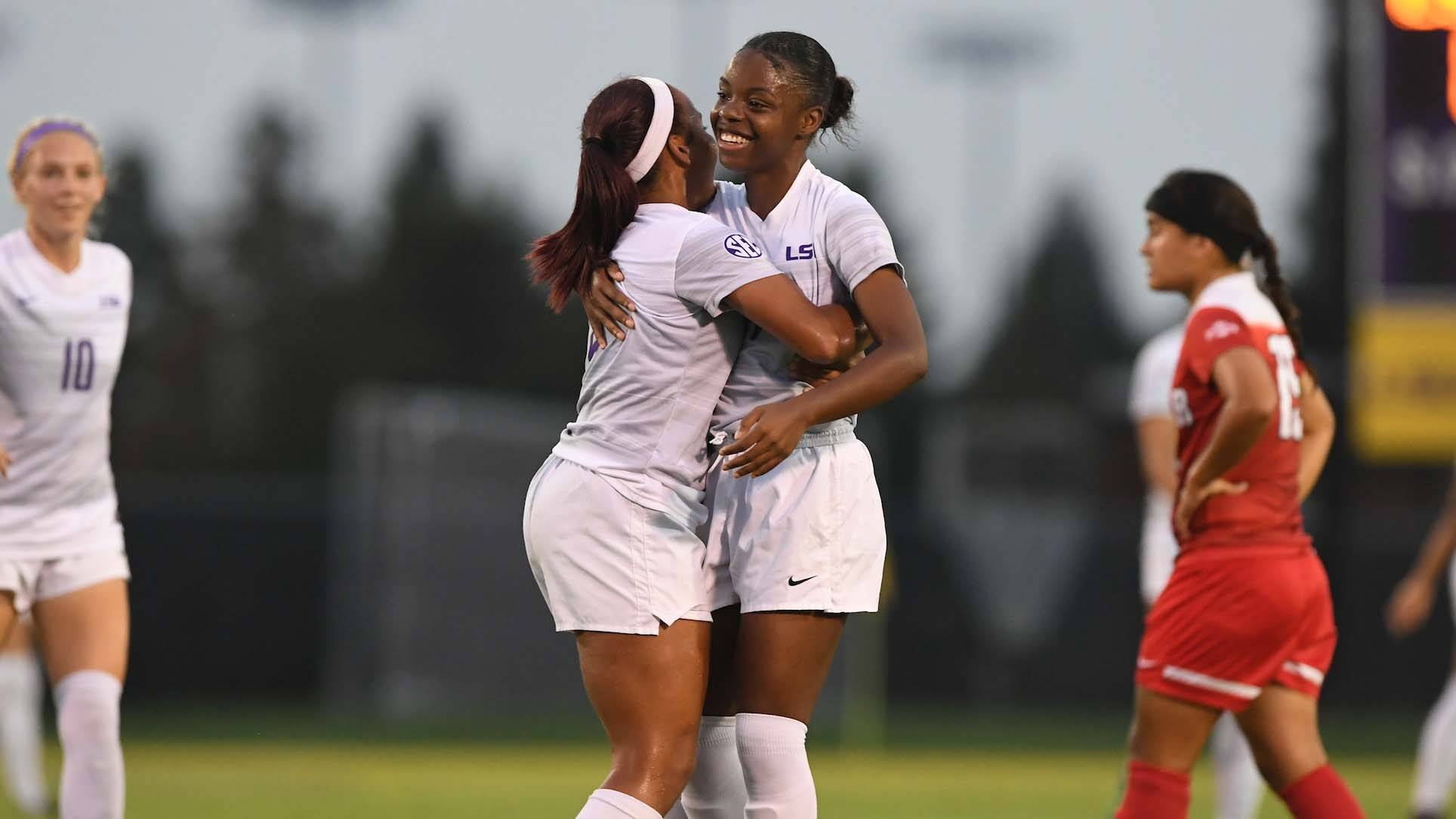 BATON ROUGE – First-half goals by junior Alex Thomas and freshman Dana Reed were all the hosts needed to maintain their 100 percent record to start the season as the Tigers were deserved 2-0 winners over the visiting Lamar Cardinals on Friday night in their rescheduled match at the LSU Soccer Stadium.

The sides were originally set to meet in Baton Rouge on Sunday night before the decision was made to move the contest due to the expected effects of Hurricane Harvey making landfall this weekend.

The Tigers are off to their first 3-0 start to a season since 2008 and their sixth start of three wins from three matches in program history. They also defeated Lamar (2-1) for the second-straight season after scoring a 4-0 home win in their inaugural meeting in Baton Rouge a season ago. LSU has now outscored its opponents by a 10-0 margin to open the 2017 season.

“Luckily, we made the decision at 4:30 p.m. yesterday, so we were able to alter our practice schedule just a little bit,” said LSU head coach Brian Lee of the teams rescheduling the match to Friday. “We really needed to get the game in just to get the run in as much as anything. If we didn’t play, we would have gone 11 days without a game.

“It’s good preparation for the SEC. They’re a little more athletic, and I thought they played really hard. Give credit to the Lamar players and coaches. They had a good game plan and their effort was all-out tonight.”

LSU was off to a fast start once again as Thomas put the home side on the board just eight minutes into the match when she cut back on her right foot and fired inside the left post from near the penalty spot for the 1-0 advantage. Freshman Tinaya Alexander danced through the Lamar midfield before finding Thomas in space in the left side of the area for the early breakthrough.

The Tigers have benefitted from quick starts in each of their three matches this season as Alexander also scored 17 minutes into her debut against Mississippi Valley State on opening night en route to a 5-0 win on Aug. 18. Senior Nicole Howard also broke the ice 10 minutes from kickoff in LSU’s 3-0 away win at Colgate last Sunday.

“We are always excited for game day,” Thomas shared of her team’s excitement playing on Friday night. “Everybody was pumped up. We had to get our minds right that it’s about to be game day. I think we did a good job with it. We were ready to go.”

Freshman Lucy Parker nearly doubled the hosts’ lead on 21 minutes when her curling free kick was palmed over the ball for a corner kick by Lamar goalkeeper Lauren Lovejoy, who made seven saves on the night.

Reed made an immediate impact on proceedings after entering the lineup in place of senior forward Zoe Higgins with 32 minutes gone. She timed her run to perfection and rounded the keeper for a tap-in finish inside the six-yard box in the 39th minute after being played through the Cardinal back line by Thomas. LSU’s 2-0 lead at the break help up through full time to give the Tigers their third win in as many outings in 2017.

Higgins came closest to trebling the Tigers’ lead in the second half when she was denied by Lovejoy on the breakaway after being played through the lines by freshman Tiana Caffey in the 54th minute. Her header from the top of the six-yard box just 62 seconds later was directly in Lovejoy’s patch as the Cardinal keeper scrambled away the loose ball before Higgins could pounce on her own rebound.

Junior goalkeeper Caroline Brockmeier saved each of Lamar’s four shots on target to collect her third-straight clean sheet to open the season as the Tigers have not conceded in 270 minutes of action.

With the 2017 season now in full swing, LSU will be back on the road next week with a trip to Washington, D.C., where they will face George Washington of the Atlantic-10 Conference on Thursday, Aug. 31, with kickoff set for 4 p.m. CT at the Mount Vernon Athletic Complex. The Tigers return home Sunday, Sept. 3, as they play host to Houston at 5 p.m. CT at the LSU Soccer Stadium.