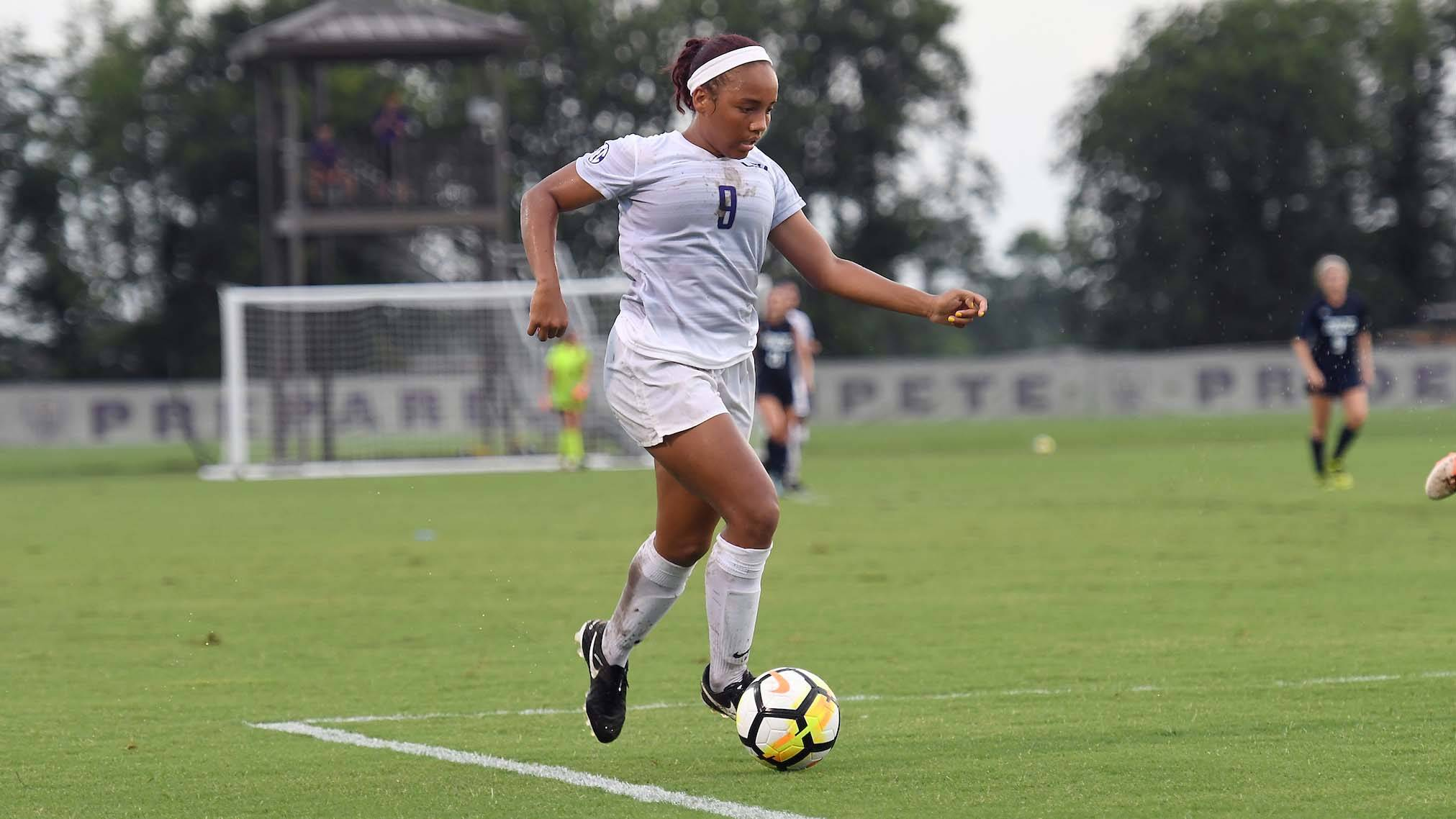 HAMILTON, N.Y. – The LSU Soccer team passed its first road test of the 2017 season as senior Nicole Howard gave the visitors an early lead inside of 10 minutes before senior Zoe Higgins and junior Alex Thomas found the scoresheet in the second half in a 3-0 shutout of Colgate on Sunday night at Beyer-Small ’76 Field.

Junior goalkeeper Caroline Brockmeier also made a career-high 12 saves for her second clean sheet to start the season as the Tigers opened 2-0 for the first time since 2014 and eighth time in program history.

LSU also avenged its 2-1 home defeat to Colgate (0-1) in Baton Rouge a year ago while spoiling the Raiders’ season opener in front of 676 fans turning out on a pleasant Sunday night on the Hamilton campus. The series is now tied 1-1 following their inaugural meeting during the 2016 season.

“This was a great illustration of our determination and character to come out and fight the way we did for 90 minutes,” said LSU head coach Brian Lee. “This is a really tough environment to play following our long travel day. Their fans really get behind their team and make it tough for the opposition to get comfortable. We’re happy for the win, and we need to use this as a platform as we get ready for next week.”

Howard settled down the visitors with her first goal of the season as she provided the end product to Tinaya Alexander‘s work down the right-hand side. Alexander squared to Howard for a curling strike from 14 yards that found the side netting inside the left post as a diving Kelly Chiavaro in goal for the Raiders was powerless to stop the attempt.

Howard nearly struck again two minutes later when she forced a diving save from Chiavaro from the top of the box as the Colgate keeper extended to her right to keep her team’s deficit at 1-0.

Colgate’s best opportunity to level in the first half came on 14 minutes as a corner kick found the head of Leah Lewis at the top of the six-yard box, but her effort shaded the left post on its way beyond the end line for an LSU goal kick. Brockmeier was called into action five minutes later for a leaping save on Emily Crichlow’s rising effort at the near post from 10 yards.

Brockmeier made the save of the night just five minutes after the restart with First-Team All-Patriot League midfielder Eliza Doll standing over a free kick 20 yards directly in front of goal. Doll unleashed a low lining shot around the LSU wall, but Brockmeier was quick to react for a diving stop at the left post. Brockmeier stood tall each time her number was called, even denying Lewis a free header from Doll’s corner kick on 55 minutes.

The redshirt junior from Tallahassee, Florida, saved 12 Colgate shots on the night for a new career high, breaking her previous best of nine saves in a match set twice last season against Florida and Georgia.

“This is a great start to the season for our team. We’re able to get goals early, and we’re also able to hold them off as well. We just have to keep pushing in the next couple of games and keep it going,” Brockmeier said following the match. “It’s all about staying focused and communicating with my back line and them communicating with me. It’s important that we help each other out.”

After taking the second-half kickoff, it took only seven minutes for the visitors to double their lead through Thomas as she shrugged off a defender for a one-time finish near the top of the six-yard box. Freshman Lucy Parker played Higgins into space for a one-touch cross and one-time finish by Thomas for a 2-0 advantage in the 52nd minute.

Higgins later put the game to bed in the 69th minute with an opportunistic sliding finish beyond the right side of the penalty area as she caught Chiavaro off her line for her second goal in as many starts. Freshman Tiana Caffey assisted for the second-straight match as she slipped Higgins through the right side.

Eight of the Tigers’ 17 total shots in the match found the target as the visitors also attempted four corner kicks on the night. Colgate finished with 12 shots on goal from its 25 total attempts and seven corner kicks.

The 2017 season will certainly be in full swing next weekend when the Tigers return home to play host to the Lamar Cardinals in their second home match of the campaign on Sunday, Aug. 27, with kickoff set for 6 p.m. CT at the LSU Soccer Stadium.  They will then be back on the road Thursday, Aug. 31, with a trip to Washington, D.C., to face George Washington in a match set to kick off at 4 p.m. CT.