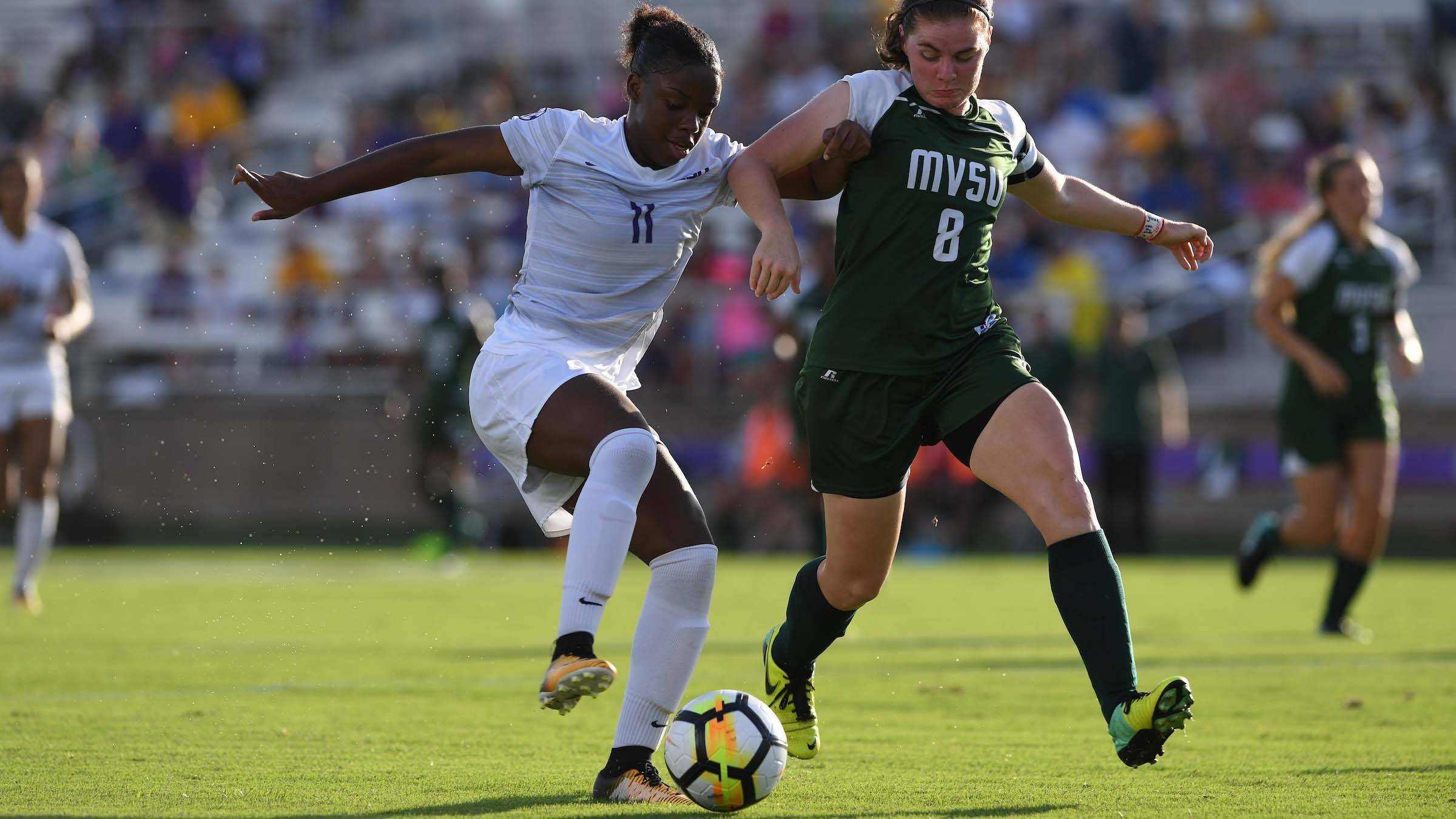 BATON ROUGE – Freshmen Tinaya Alexander, Lucy Parker and Dana Reed each found the net on their debuts while senior striker Zoe Higgins added her first goal of the season to lead the Tigers to a decisive 5-0 win over visiting Mississippi Valley State in their season opener Friday night at the LSU Soccer Stadium.

LSU (1-0) claimed the points in its inaugural meeting with the Devilettes (0-1) with its largest margin of victory since a 6-0 hammering of Louisiana-Monroe nearly four years ago on Aug. 27, 2013.

“It was a good team effort,” said LSU head coach Brian Lee following the match. “A bunch of kids got to play. It was a step forward from our preseason friendlies, and we were trying to extend some players’ minutes a little bit. I thought a lot of the younger players stepped forward and contributed, and the older players have progressed so much.”

It didn’t take long for Alexander to announce herself to the home supporters as she found the breakthrough just 17 minutes from the opening kickoff when she turned her defender in the right side of the box and let fly a left-footed strike inside the post from 10 yards to open her account. Sophomore Jade Clarke squared the ball the Alexander for the finish to put the home side 1-0 in front in the early stages.

Reed then struck quickly just three minutes after coming onto the pitch for her debut as she tapped home from inside the six-yard box in the 33rd minute after a nice combination between Alexander and senior Nicole Howard in front of the Mississippi Valley goal.

Alexander trebled LSU’s lead just minutes before the break when she ghosted past two Mississippi Valley defenders and converted from a tight angle in the right side for her second goal of the night. Fellow freshman Tiana Caffey showed great awareness in the build up to find Alexander in space to give the hosts a commanding 3-0 advantage on 43 minutes.

“She’s a good player,” Lee said of Alexander. “We think she has really high-end potential. Most important to me is Tinaya has really assimilated to the team off the field. She is as good of a person as she is a player. She is very coachable, supports her teammates and she really has just been a dream on and off the field.”

Higgins and Parker put the outcome beyond doubt just 23 seconds apart in the second half when Higgins first headed Reed’s end-line cross into the back of the net at the 55:43 mark before Parker bagged LSU’s fifth at 56:06 when Reed squared to Howard for a one-touch pass to Parker at the top of the box where she finished inside the right post for the final 5-0 scoreline.

“This win was a big step to start our season off this year,” Higgins said. “We needed to get the win to make sure we got a good foot in the door and start the season off strong. My main emphasis was to get inside their six (yard box) every time someone got it out wide for a cross. I kept making that run every time, and I got a good touch on the ball for the goal.”

Junior goalkeeper Caroline Brockmeier faced just three shots and did not have to make a save in 90 minutes for her first clean sheet of the season and eighth of her career. The Tigers were led defensively by the likes of Caffey, senior Jordane Carvery, sophomore Ellie Weber and freshmen Chiara Ritchie-Williams and Lindsey Eaton as they limited Mississippi Valley’s star striker Laadi Issaka to just one shot in her 75 minutes of action. Issaka was the NCAA’s third-leading scorer a year ago with 19 goals for the 2016 season.

“I thought the leadership on the team was great with the goalkeeper and the back  four really keeping control of the game,” Lee said of LSU’s defensive performance. “I was really pleased with our first match, but with the recognition that it’s just the first match.”

With their season-opening win in the books, the Tigers travel to Hamilton, New York, to face Colgate on Sunday night with kickoff set for 6 p.m. CT at Beyer-Small ’76 Field. They will return home next weekend for their second home match of the season against Lamar with kickoff also scheduled for 6 p.m. CT at the LSU Soccer Stadium.