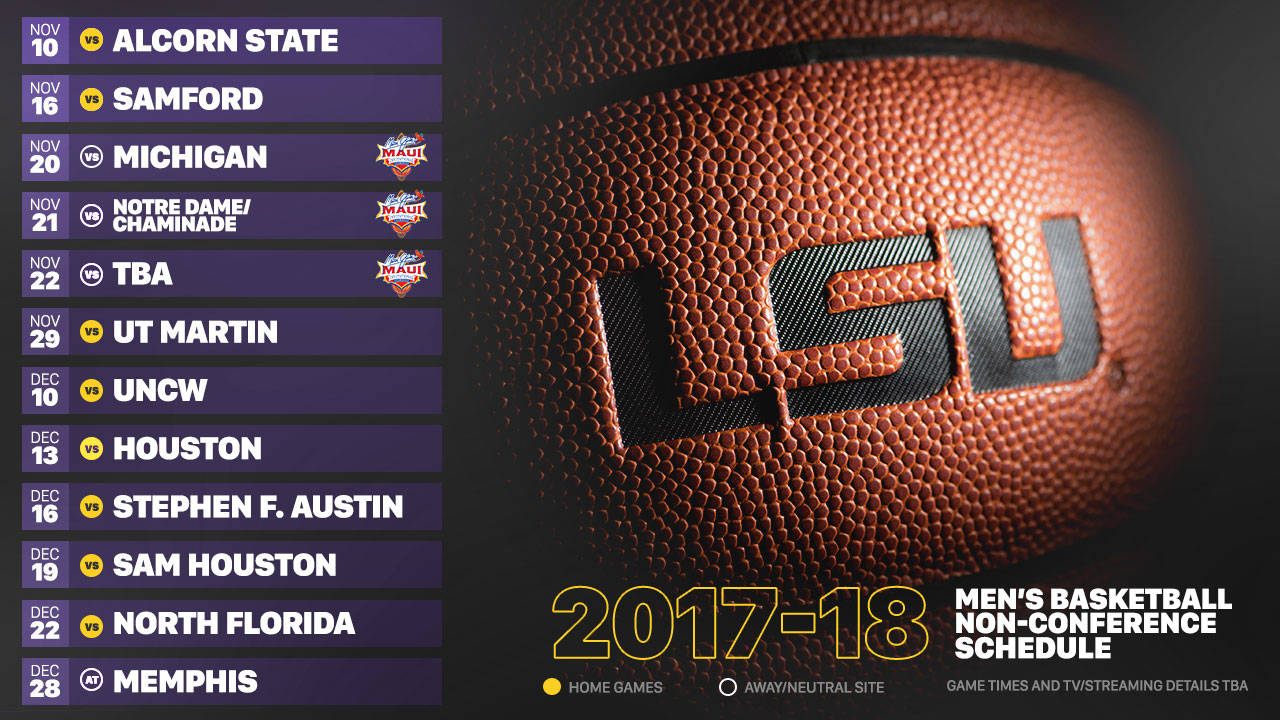 BATON ROUGE – A previously announced tournament trip to Maui and the start of home-and-home sets with Houston and Memphis highlight a 12-game non-conference schedule that will start the first year of LSU Basketball under Coach Will Wade.

The season will begin on Friday night, Nov. 10, against Alcorn State in a game set for the night before the Southeastern Conference football game with Arkansas in Tiger Stadium on Nov. 11. It will be the first of eight home games in November and December at the Pete Maravich Assembly Center as the Tigers will play for the first time under a new high-definition video board that has been hailed as the largest for an on-campus basketball arena.

“The non-conference schedule will be challenging for us and is filled with teams coming off very good seasons a year ago. That includes five home games against teams that won 20 plus games last year and vied for post-season berths,” said Coach Wade. “We know our opening game with Alcorn, the night before the LSU-Arkansas football game, is one that we want all our fans to be at the Maravich Center to experience what LSU basketball is now about.”

The Southeastern Conference games, all television and streaming scheduling and start times are expected to be announced in the weeks ahead.

Alcorn will enter the opening game off an 18-win season from 2017, its most wins since 2002, and a 13-5 mark the Southwestern Athletic Conference under league Coach of the Year Montez Robinson.

The Tigers will have one more home contest before heading to Maui on Nov. 16 against Samford. The Birmingham school won 20 games a year ago and advanced to the second round of a post-season tournament.

As announced by the Maui Jim Maul Invitational last month, the Tigers will play the final game of the opening night of the tournament at the Lahaina Civic Center on Nov. 20 against Michigan in a game that will air on ESPNU at 10:30 p.m. CT. Depending on the outcome of that game, the Tigers will face either Chaminade or Notre Dame on Nov. 21 with a final game in the event on Nov. 22 against either Cal, VCU, Wichita State or Marquette.

After the break for final exams, the Tigers will host an NCAA Tournament team that won 29 games a year ago, UNC Wilmington on Dec. 10. That game will be followed by the start of another home-and-home series with Houston at the Maravich Center on Dec. 13. The teams split their two meetings over the last two seasons.

The games will continue every three games before Christmas as LSU steps into the Southland Conference to host Stephen F. Austin on Dec. 16 and Sam Houston State (winners of 21 games a year ago) on Dec. 19 before closing out the pre-Christmas games with a Dec. 22 home contest against North Florida. This will be the third-straight season the Ospreys will visit Baton Rouge.

The non-conference schedule concludes on Dec. 28 after the Christmas break when LSU travels to Memphis to take on Tubby Smith and his Tigers.

Season tickets are available starting at $100 for what will be 17 home games, including the nine to be announced conference games. Information about season tickets is available at LSUtix.net.