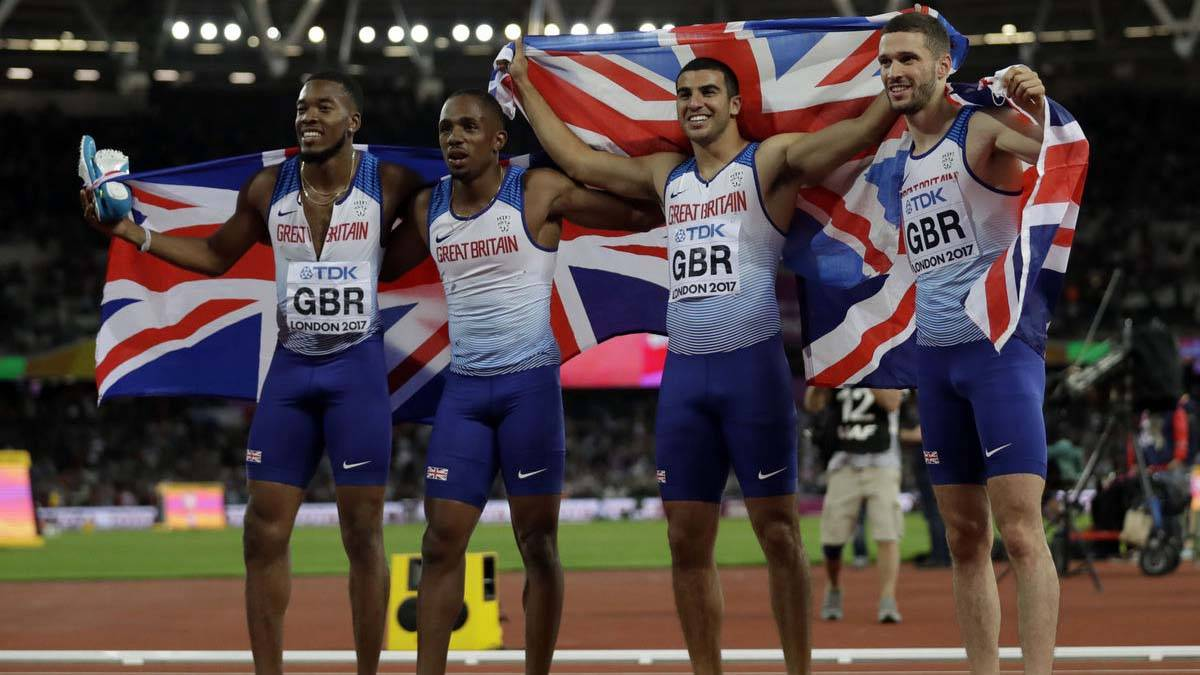 LONDON – LSU graduate Nethaneel Mitchell-Blake put the home fans on their feet at the London Stadium on Saturday night when he beat Team USA anchor Christian Coleman to the finish line to hand Great Britain the World title in the men’s 4×100-meter relay with a national-record time of 37.47 seconds.

Many expected Saturday’s relay final to be a coronation of sorts as the last race in Usain Bolt’s historic career as the greatest sprinter to ever lace up a pair of spikes in the sport of track and field.

But it was the host nation stealing the headlines in the final event of the day when Mitchell-Blake took the baton from Daniel Talbot with the lead at the final exchange and delivered Great Britain’s first ever World title in the event with a new British and European record in the event. With Chijindu Ujah and Adam Gemili running the first two legs, Team GB destroyed its previous national best of 37.73 set in winning the silver medal at the 1999 World Championships in Seville, Spain.

Coleman, who turned pro following his junior season at the University of Tennessee in June, anchored the United States to the silver medal in 37.52, while Japan won the bronze medal with a time of 38.04.

“I wasn’t sure I had won,” Mitchell-Blake told BBC Sport in the aftermath of the race. “Never a guarantee in our sport. I could see (Christian Coleman) out of the corner of my eye. I’m still trying to register that we have won. The feeling of euphoria was from infinity. I can’t register it. We smashed the British record to pieces.”

This is how close it was between #LSU‘s Nethaneel Mitchell-Blake & Tennessee’s Christian Coleman for the World 4×1 relay title! #SECSpeed pic.twitter.com/88sqFTg6nR

If anyone could pull Jamaica out of third place at the final exchange to win a fifth-straight World relay title, it was Bolt. The 30-year-old had proven himself nearly unbeatable in a decade of dominance that saw him take home eight Olympic gold medals and 11 World titles since 2008 as the most dominant force the sport has ever seen.

Bolt’s career ended when he suffered an injury midway down the homestretch at the London Stadium where he swept 100-meter, 200-meter and 4×100-meter relay gold medals at the 2012 Olympic Games.

Mitchell-Blake and his teammates won only the third global championship for Great Britain’s 4×100-meter relay team following Olympic golds 92 years apart in 1912 and 2004. They also became the third-fastest country in history, trailing only Jamaica (36.84) and he United States (37.38).

Mitchell-Blake climbed to the top of the medal podium as a World Champion just two days after missing out on the podium by a single spot when he finished in fourth place in the 200-meter final on Thursday night. He became the first LSU Track & Field athlete to win a World title in the men’s 4×100-meter relay since former Olympic Gold Medalist Glenroy Gilbert won it with Canada in 1997.

With his record-setting win with Great Britain, LSU athletes have now won 19 World titles all-time and 31 medals in history at the World Championships that also includes seven silver medals and five bronze medals.

✅ Graduate from #LSU in May
✅ British 200m Champion in July
✅ WORLD CHAMPION in August!

Mitchell-Blake wasn’t the only former LSU athlete to line up in a relay final during Thursday’s events as Kelly-Ann Baptiste anchored Trinidad & Tobago to a sixth-place finish in the women’s 4×100-meter relay when the foursome ran a seasonal best of 42.62. The United States (41.82), Great Britain (42.12) and Jamaica (42.19) were awarded the medals in the event.

Senior Michael Cherry helped lead the United States into the final of the men’s 4×400-meter relay on Saturday morning when he ran the third leg of the team taking the tape in the second qualifying heat with a World-leading time of 2 minutes, 59.23 seconds. He teamed with Wil London III, Bryshon Nellum and Tony McQuay to edge Trinidad & Tobago (2:59.35) for the win with the fastest time of the day.

Lady Tiger senior Travia Jones lined up as the third leg of Canada’s women’s 4×400-meter relay team that came up short of the World final with a time of 3:28.47 for sixth place in the first heat and 11th place overall.