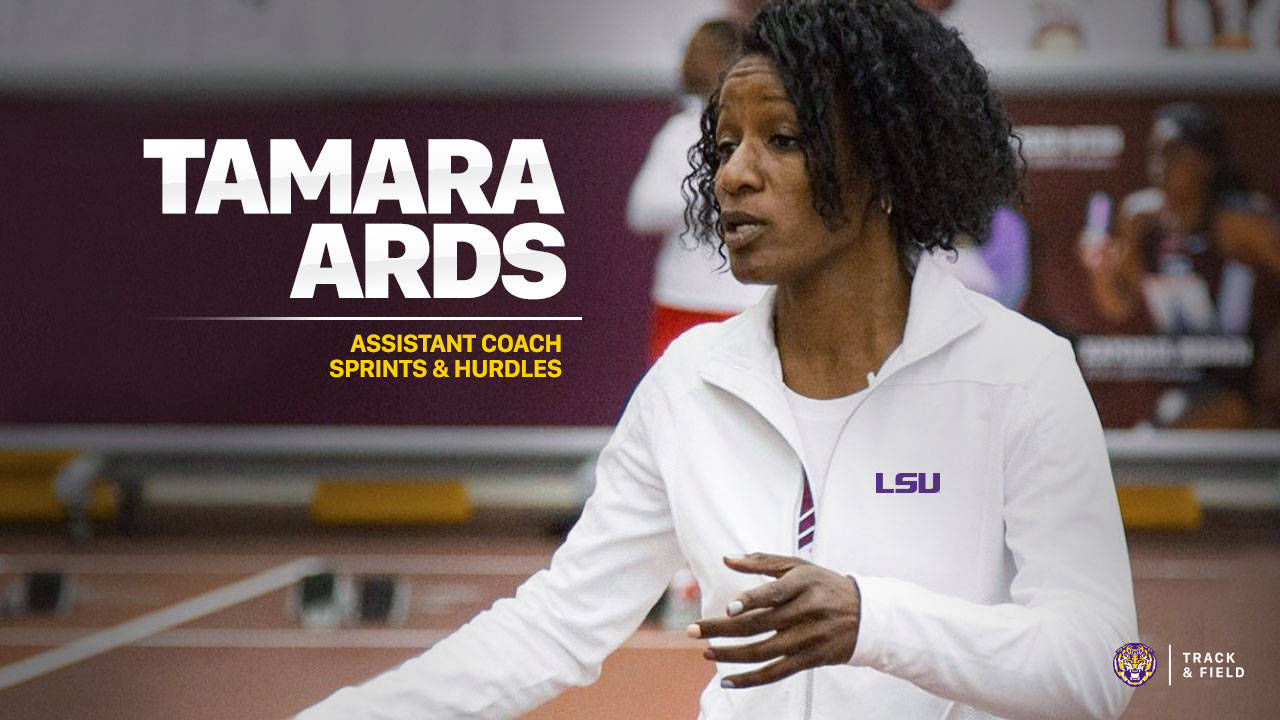 BATON ROUGE – LSU Track & Field’s coaching staff is now complete ahead of the 2017 fall semester as head coach Dennis Shaver announced Monday afternoon the hiring of 13-year NCAA Division I coaching veteran Tamara Ards as an assistant coach with a focus on working with LSU’s sprinters, hurdlers and relays teams.

Ards returns to Baton Rouge following one season as an assistant coach at Arizona State this spring where she coached the women’s sprints and hurdles. Since first joining the coaching ranks in 2004, she has developed her craft with stops at Texas, Clemson, NC State, Colorado, UNLV and Eastern Michigan.

Ards career path has come full circle as she also previously spent time as part of LSU Track & Field while working under Shaver for one year as the program’s Director of Operations during the 2006 season.

“We’re excited to have Tamara Ards back as a member of our staff once again,” said LSU head coach Dennis Shaver. “Her development as a coach is a testament to her hard work and determination to be the very best she can be in developing young people both on and off the track. She’s made an impact wherever she’s been, and we look forward to her working with our team here at LSU going forward.

Ards’ reputation as one of the leading assistant coaches in NCAA Division I track and field was confirmed in 2016 with her appointment to Team USA’s staff at the North American, Central American & Caribbean Under- 23 Championships held in San Salvador, El Salvador last summer.

Before joining Greg Kraft’s staff at Arizona State, Ards coached three seasons at NC State from 2014-16 where she was a finalist for the annual Southeast Region Men’s Assistant Coach of the Year award as handed out by the U.S. Track & Field and Cross Country Coaches Association. The Wolfpack competed among the nation’s elite in 2016 while lining up in the NCAA final of the men’s 4×100-meter relay for the first time since 1991. It was a season that also saw NC State senior Alexis Perry place fifth nationally in the NCAA final of the women’s 100-meter hurdles.

While serving as a volunteer assistant coach at the University of Texas in 2013, the Longhorns swept Big 12 Conference Championships during the indoor and outdoor seasons. Ards assisted the coaching staff in training athletes in the sprints, hurdles, jumps and multi-events during her stint in Austin as the Texas men proved to be among the nation’s elite in her one season.

Former Texas All-American Keiron Stewart clocked his collegiate best of 7.63 seconds en route to a fifth-place national finish in the 60-meter hurdles at the NCAA Indoor Championship in 2013. The outdoor season also saw Johannes Hock crowned the NCAA Outdoor Champion in the decathlon with teammate Isaac Murphy following in fourth place in the event at the national meet that year.

Clemson’s athletes also flourished with Ards’ coaching of the men’s and women’s hurdles, 400 and 800 meters and jumps as the program’s produced 13 All-Americans in those events in 2011 and 2012.

In 2011, American-record holder Brianna Rollins claimed the NCAA Indoor title in the women’s 60-meter hurdles while Miller Moss swept ACC Indoor and NCAA Indoor championships in the men’s heptathlon as two of the top athletes in collegiate track and field. Jasmine Edgerson was also crowned the ACC Indoor Champion in the women’s 60 hurdles that year.

The 2012 season saw both Rollins and Spencer Adams sweep ACC Indoor titles in the men’s and women’s 60-meter hurdles while the Clemson women later took home the fourth-place team trophy with their effort at the NCAA Outdoor Championships. Ards was also part of four ACC-title-winning teams in her two seasons at Clemson.

“I’m truly grateful and honored to be back at LSU working with the track program once again,” Ards said. “I’m excited about the opportunity to work alongside my mentor, Coach (Dennis) Shaver, and a very passionate and knowledgeable coaching staff. We have a talented group of student-athletes coming back, so I’m eager to get started and help contribute to this program’s goal of being national champions.”

A former All-American sprinter in her own right while attending the University of Colorado from 1991-96, she captained the Buffaloes to the team title at the former Big Eight Conference Outdoor Championships in her senior season in 1996. She graduated from Colorado in May 1995 with her degree in journalism before later earning a Master of Science in physical education from UNLV in May 2010.

Ards has served as the vice-chairwoman of USA Track & Field’s Coaches Education Committee and as a USATF Level I Instructor since 2008 while providing educational opportunities for grassroots and elite coaches who work with athletes at the junior high school, high school and college levels.