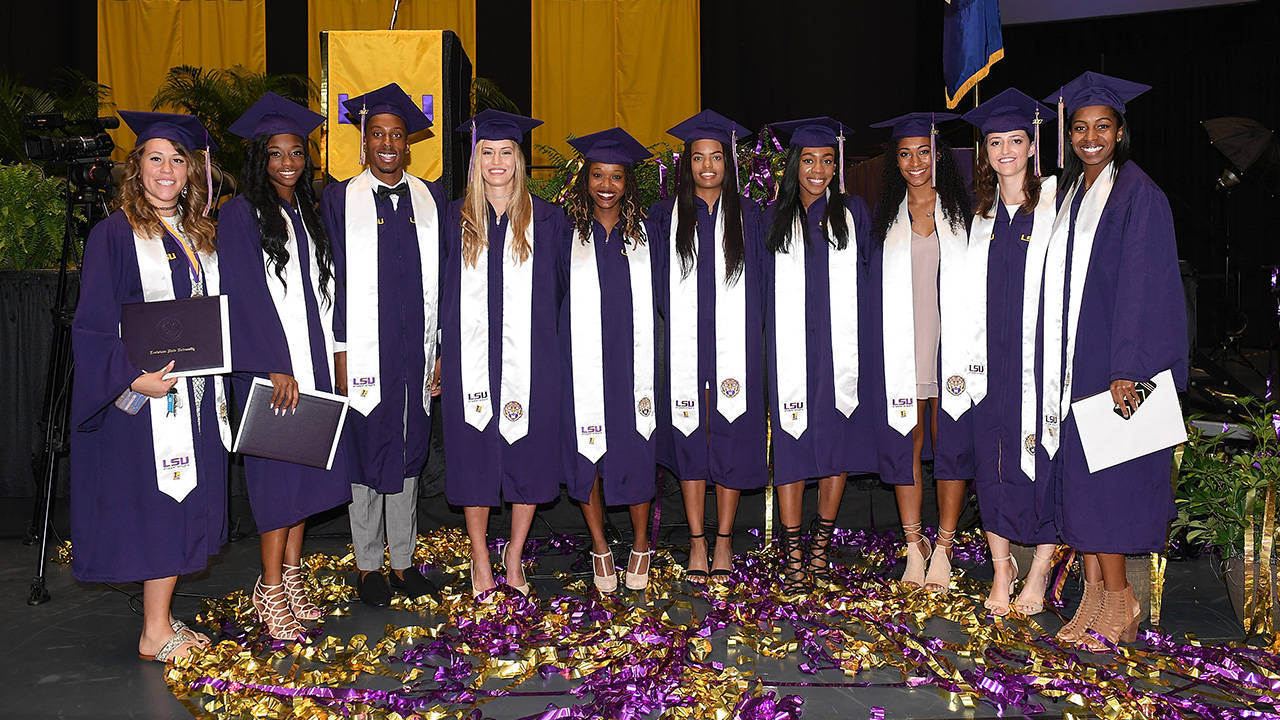 BATON ROUGE – Twenty-four LSU student-athletes received their college diploma on Friday as the university held its summer commencement at the Maravich Assembly Center.

Here are some of the highlights from the list of student-athletes graduating today:
Jordan Romero (baseball) – Catcher for the Tigers in 2016 and ranked second on the team in both home runs (9) and RBI (41). Helped lead the Tigers to an NCAA Tournament National Seed and a Super Regional appearance.

Summer Clarke (soccer) – Three-time All-SEC striker during her collegiate career, including her senior season in 2016 when she earned second-team honors. Also a two time National Soccer Coaches Association of America All-South Region selection with 27 goals and 69 points in four seasons to rank as the No. 6 scorer in school history. Graduated with a degree in kinesiology.

LaMar Bruton (track & field) – Two-time NCAA Champion and three-time All-American as a member of LSU’s men’s 4×400-meter relay team in his two seasons with the team. Helped the Tigers sweep NCAA Indoor and NCAA Outdoor titles in the relay as a junior in 2016. Was also the men’s team’s representative on the Student-Athlete Advisory Committee. Graduated with a degree in sports administration.

Blair Henderson (track & field) – Ended his career as a senior in 2017 by earning All-American honors in the 800 meters at the NCAA Indoor Championships as the seventh-place finisher in his first career national final. Also earned his first career All-SEC honor as the SEC Indoor Silver Medalist in the 800 meters to highlight his indoor season. Graduated with a degree in kinesiology.

Travia Jones (track & field) – Currently representing Canada at the IAAF World Championships in Athletics starting today where she will run the 4×400-meter relay. Was an SEC Indoor Champion and two-time All-American as a member of LSU’s 4×400-meter relay during her collegiate career with our team. Graduated with a degree in kinesiology.

Jada Martin (track & field) – A decorated sprinter in her collegiate career as a seven-time All-American, four-time SEC Champion and eight-time All-SEC performer in her four seasons from 2013-16. Ran on LSU’s NCAA Champion 4×100-meter relay team as a junior in 2016. Ended her career as a senior in 2017 by being crowned the SEC Indoor Champion in the 200-meter dash and earning All-America honors in the event during both the indoor and outdoor seasons. Graduated with a degree in sports administration.

Frank Herron (football) – Projected as a starter on the defensive line for the Tigers in 2017. First member of his family to graduate from college. Graduated with a degree in interdisciplinary studies.