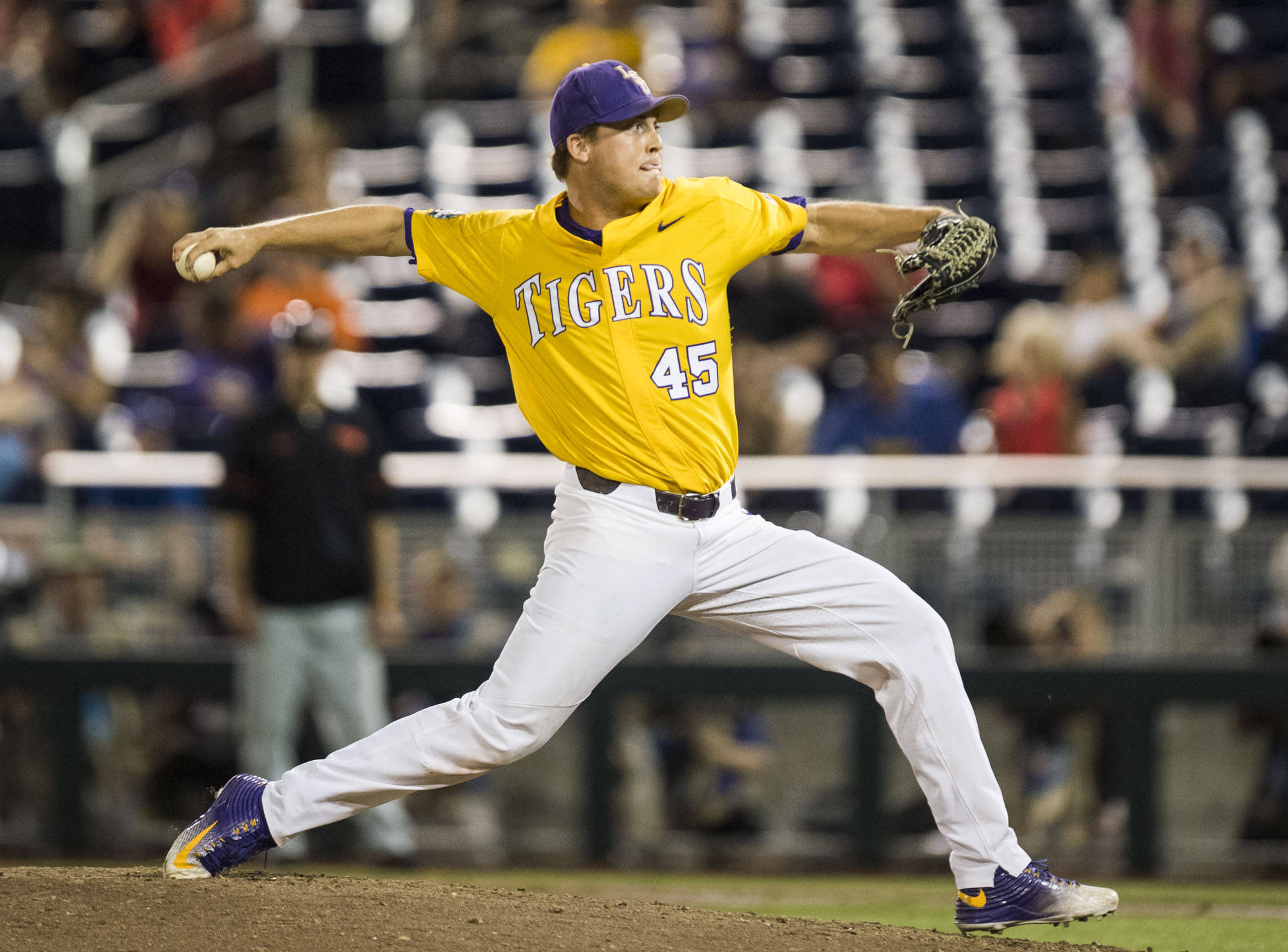 OMAHA, Neb. – LSU (52-18) begins a quest for its seventh national championship at 6 p.m. CT Monday when the Tigers face Florida (50-19) in Game 1 of the College World Series Finals at TD Ameritrade Park.

Game 2 of the best two-of-three championship series is set for 7 p.m. CT on Tuesday, and Game 3, if necessary, will start at 7 p.m. CT on Wednesday.

The LSU-Florida games will be carried on the LSU Sports Radio Network (WDGL 98.1 FM in Baton Rouge), and the radio broadcast may be heard free at www.LSUsports.net/live.

The games will be televised on ESPN, and they may also be viewed online at WatchESPN.com and the Watch ESPN app.

LSU and Florida shared the 2017 Southeastern Conference regular-season title with 21-9 league records. The Gators won two of three games over the Tigers during the regular-season (March 24-26) in Gainesville, Fla.

“We’re thrilled to be in the Finals here,” said LSU coach Paul Mainieri. “I just think it’s an awesome thing that these two SEC schools get to play for a national championship. This is a great thing for us to play each other here in Omaha, and I know both teams are going to play their hearts out. Even though there will only be one winner at the end, I think both teams are very deserving of being here, and I think we’ll have great ball games.”

LSU has a 4-0 all-time mark against Florida in College World Series games – the Tigers won two straight games over the Gators in Omaha in both 1991 and 1996 en route to national championships.

Mainieri said that senior right-hander Russell Reynolds will start Monday’s game on the mound for the Tigers. Reynolds, a Baton Rouge native, pitched a scoreless inning in LSU’s CWS game versus Oregon State on Monday night, recording one strikeout. He has worked 1.2 scoreless innings over his last three relief appearances, allowing one hit with one strikeout.

“We’re going to count on Russell’s experience as a fifth-year senior,” Mainieri said. “He’s pitched very well the last few times out, and we feel like he gives us the best chance to get us off to a good start.”

LSU is hitting .291 as a team this season with 68 homers and 76 steals in 105 attempts. Freshman centerfielder Zach Watson is batting a team-high .322 with nine doubles, three triples, nine homers and 37 RBI. Watson is batting .421 (8-for-19) in the CWS with one double, one homer, two RBI and three runs.

Junior rightfielder Greg Deichmann is batting .309 and leads the Tigers in homers (19) and RBI (73), while sophomore leftfielder Antoine Duplantis has driven in 60 runs and collected a team-high 88 base hits.

Junior catcher Michael Papierski has team-highs of three homers and five RBI in LSU’s five CWS games. LSU has launched seven home runs in the College World Series, the most by any team since the CWS moved to TD Ameritrade Park in 2011.

Outfielder Nelson Maldonado is batting .303 for Florida with nine doubles, six homers and 32 RBI. First baseman/DH JJ Schwarz has team-highs of 12 homers and 54 RBI. Schwarz shares the team lead in base hits (66) with shortstop Dalton Guthrie, who has nine doubles, four homers and 11 steals.

LSU IN THE NCAA TOURNAMENT
LSU has the highest winning percentage in NCAA Tournament history with a 152-59 (.720) record; the Tigers are competing in the tournament for the 30th time … LSU is the No. 4 NCAA Tournament National Seed, marking the sixth straight year in which the Tigers have been named a National Seed by the NCAA Baseball Committee … LSU and Stanford (1999-04) are the only schools in NCAA history to earn six straight National Seeds … the Tigers are making their 18th College World Series appearance (all since 1986) … LSU and Cal State Fullerton are tied for seventh place in all-time CWS berths … LSU has won six College World Series titles (1991, 1993, 1996, 1997, 2000, 2009) and the Tigers are tied with Texas for the second-most CWS championships; first-place Southern California has 12 CWS titles … LSU is 40-25 (.615) all-time in College World Series games … the Tigers are making their seventh appearance in a CWS championship game/series … LSU is 6-0 in its previous final game/series appearances.

SERIES RECORD VS. FLORIDA
LSU leads the overall series with Florida, 61-47-1, and the Tigers hold a 10-9 edge in the last 19 meetings between the teams. Florida won two of three games over the Tigers during the 2017 regular season (March 24-26) in Gainesville. LSU has a 4-0 all-time mark against Florida in College World Series games – the Tigers won two straight games over the Gators in Omaha in both 1991 and 1996 en route to national championships.