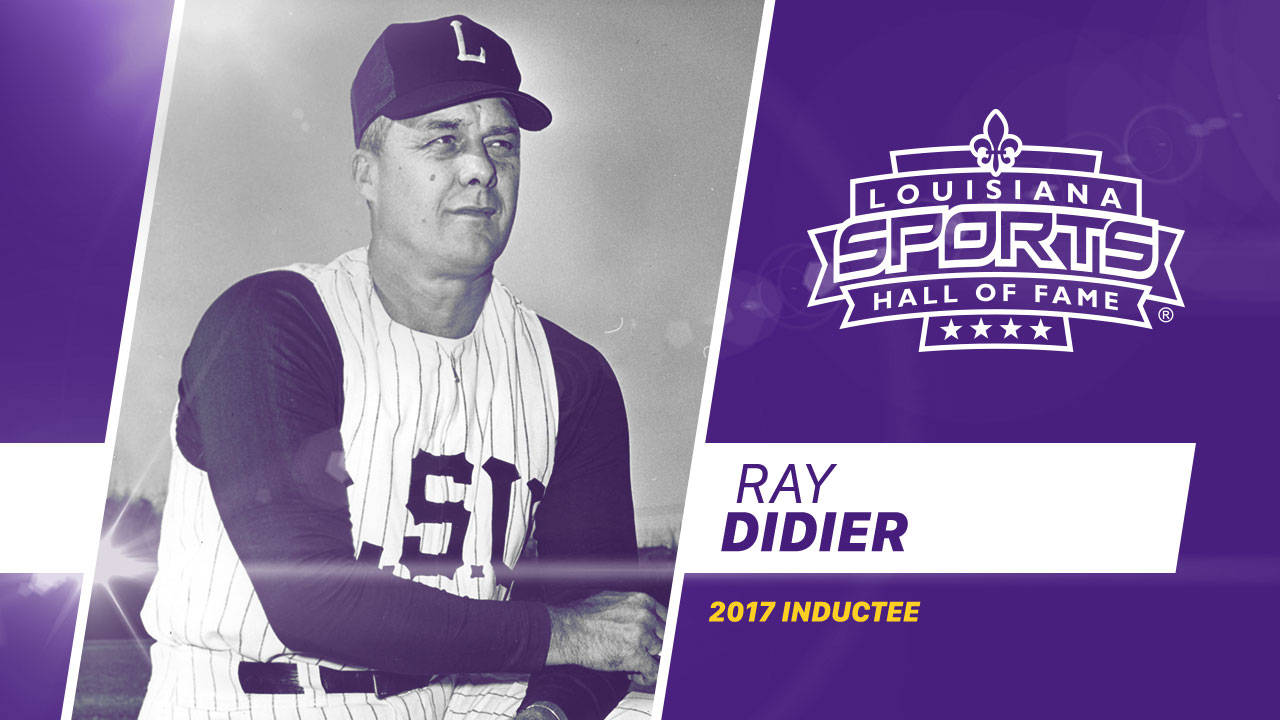 By Brent St. Germain
Written for the LSWA

(LSUsports.net Note — The induction ceremonies for the 2017 class of the Louisiana Sports Hall of Fame is set for Saturday night in Natchitoches. This year LSU is represented by four people who left their mark on sports at LSU and the state of Louisiana: football player Eddie Kennison, coach Ray Didier, golfer David Toms and current LSU gymnastics coach D-D Breaux. Today is the second of four profiles on this year’s LSU links to the Louisiana Sports Hall of Fame class.)

The Louisiana Sports Hall of Fame is filled with many well-known athletes, coaches and athletic officials.

But of the more than 400 members in the Hall of Fame, there are only two sets of siblings – track hurdlers Dave and Don Styron and golfers Lionel and Jay Hebert.

That number will increase to three when the Class of 2017 is inducted June 24 in Natchitoches. Former Southwestern Louisiana Institute, LSU and Nicholls State University baseball coach Raymond Didier will join his brother Mel Didier (Class of 2003) in the Hall of Fame.

“It’s one of the greatest things to happen to our family,” Mel Didier said. “Raymond was more than just my brother, as he was my tutor and coach when I was in school. He set some standards for me very, very high, and I am really proud that he will be joining me in the Louisiana Sports Hall of Fame.”
Raymond Didier’s son, Chip, said his family is proud to be joining the Hall’s elite set of siblings.

“It’s a real honor for the Didier name considering his brother Mel went in several years ago,” he said. “We are real proud of the Didier name and glad to see that my dad was finally able to get in.”

Didier’s journey to the Hall of Fame began at the age of 28 in 1948 when he started coaching baseball and football at Southwestern Louisiana Institute (now UL Lafayette) and his path never left south Louisiana with stops in Baton Rouge at LSU and Thibodaux at Nicholls.

Until his death in 1978 at age 56, Didier touched the lives of countless student-athletes and sports fans during his 29-year tenure in college athletics.

Chip Didier said his father left a lasting impact and helped shape the lives of hundreds of student-athletes.

“I’ll run into people and they’ll ask if I am the son of Ray Didier,” said Chip Didier, a longtime high school and former Nicholls volleyball coach. “They would tell me that he coached them and then go into stories about him. I get this all of the time and all over the place.”

Gerald Didier, Raymond Didier’s youngest brother, had a chance to play baseball for his brother for the 1951-52 seasons and learned first-hand what made him a successful college coach at SLI.

“He was a great disciplinarian and coached with a lot of energy,” Gerald Didier said. “He worked really hard to have us prepared to play every game. He really knew a lot about the game for as young as he was.”

Raymond Didier’s desire to succeed led SLI to the 1952 Gulf State Conference baseball title. After losing the conference title to Loyola-New Orleans in 1951, he had the SLI baseball team focused in 1952.

“He really knew the game and was a hard worker to get us prepared for every game,” Gerald Didier said. “After coming close in 1951, Raymond was determined to get it done next season and he accomplished that goal.”

Although he left following the 1952 season after signing with the Brooklyn Dodgers, Gerald Didier said he always treasured the years playing baseball for his older brother.

“It was really a memorable time, and I really enjoyed it,” he said. “Even though we were separated by 13 years, I really enjoyed the time we spent together because not too many people can say they played college baseball for their brother.”

Coach Didier’s next stop was at LSU, where he coached the baseball team from 1957-63. He led the Tigers to a 104-79 record and won the SEC title in 1961. Doing double duty in football, Didier was also an assistant for LSU’s 1958 national championship football team.

Roy “Moonie” Winston, a member of the Louisiana Sports Hall of Fame’s Class of 1991, learned firsthand what type of coach Raymond Didier was in both sports, as he was an All-American in football and a team captain in baseball at LSU.

“When you look at a coach for football and a coach for baseball, there is a difference,” said Winston, who played in four Super Bowls with the Minnesota Vikings. “But for coach Didier, he was great in both sports. He knew when to take out players on the football field and knew when to make the right calls on the baseball diamond.”

Winston said LSU’s 1961 SEC championship season was a memorable time. Didier had the winning formula to lead the Tigers to their first conference title in 15 years.

“He let us do our thing, and it seemed like everyone clicked because of that,” Winston said. “Everyone played well for him from the shortstop to the outfielders. He really knew a lot about the game.”

Despite winning the SEC title, LSU was unable to represent the SEC in the NCAA Baseball Tournament because of a university policy keeping the team from competing against blacks or teams that had black players.

Winston said the baseball team was disappointed, but under coach Didier’s leadership, the team moved past its frustration.

“Coach laid it right on the wood and told it like it was,” Winston said. “He said we had to do it like this, and that’s exactly what we did. He was a hell of a coach and a hell of a man.”

After a successful stint ts his second Louisiana school, Raymond Didier was looking for a new challenge, and in 1963, Nicholls provided him with the right opportunity.

When Vernon F. Galliano took over as Nicholls’ president, he asked his old friend Didier to take over as the school’s athletic director and head baseball coach.

Prior to Didier’s arrival, Nicholls had a successful baseball program — an 86-36 record in its first four seasons — but it lacked the structure needed for overall success. Many players were using the program as a springboard to either bigger schools or the professional ranks.

Didier quickly established his rules and wanted to reshape the program into a winning mold on and off the field, a model that worked in his previous two coaching stops. He stressed the importance of getting a quality education to his players.

Moving the program in the right direction was not easy.

Chip Didier said during a game early in the days at Nicholls, his father couldn’t find his starting pitcher soon after pulling him a few innings earlier. He found the player sitting in the stands with a six-pack of beer and surrounded by girls.

The steps that Coach Didier took to reshape the baseball program were needed as Nicholls was working toward making the jump from the NAIA to the NCAA.

Mike Davis, who played at Nicholls from 1969-72, said Coach Didier needed to make the changes because the baseball program was struggling in other areas, especially academically.

“When Coach came in, they had some guys who were not going to class and were not studying,” Davis said. “He needed to clean that out to get the program set to go into the NCAA and move ahead. We had some guys who were strictly here to play baseball at that time, and Coach had to find student-athletes. Those were the challenges he was faced with early on.”

Didier’s efforts started to pay off in the 1969 season when he guided the Colonels to a 28-13 record and a second-place finish in the Gulf States Conference.

Nicholls followed it up with arguably the best season in school history. The Colonels advanced to the Division II College World Series and finished as the national runner-up, losing to San Fernando Valley State, 2-1, in the national championship game.

“Coach taught us that if you work hard you will have success,” Davis said. “We felt like we would be successful. Nobody actually dreamed about the playoffs until we actually got into it.”

Frank Monica, who played at Nicholls from 1967-70, was team captain on the 1970 team and became the longtime football coach at St. Charles Catholic. He said the Colonels’ overall success could be attributed to Didier.

“He taught us so much about the game,” Monica said. “We endeared ourselves to him, and he did the same to us. He taught us discipline, and he gave us a tremendous amount of baseball knowledge. He taught us stuff beyond the baseball field, and many of us took that with us for the rest of our lives.”

Didier remained in the Colonels’ dugout for three more seasons, winning one Gulf States titles and earning another trip to the Division II regionals.

Leaving baseball was tough, but it was necessary as he had to dedicate more time to Nicholls’ football program, which was started in fall 1972.

After the 1973 season, Didier stepped down as baseball coach to concentrate on his duties at the school’s athletic director. He compiled a 217-154-3 record at Nicholls and a 460-311 mark overall.

Going to baseball games after that was extremely tough for Didier. There were times when he would leave the ballpark because he missed coaching the game he loved so much.

Davis said Coach Didier’s death was tough because he was more than a baseball coach for many of his players.

“Coach was our father when we were here,” Davis said. “We dreaded facing him more than our parents. He looked at our report cards before we left. He looked at everything. But we knew he had our best interests in mind, and we respected him for that.”

Didier left a lasting legacy at Nicholls as scholarships are named for him, and the Nicholls baseball field is known as Ray E. Didier Field.

Mel Didier said his older brother was always well-respected around NCAA circles and even served on several national committees, so it is only natural that he will take place in the Louisiana Sports Hall of Fame.

“I was surprised that Raymond wasn’t in before he actually got in,” said Didier, 90. “He was a big name around Louisiana sports after leaving his mark at SLI, LSU and Nicholls.”

Now that his father will be taking his spot in the Hall of Fame’s hallowed halls, Chip Didier said he wished his mother, Adene Didier, could live long enough to see it happen. She passed away on Dec. 29, 2015 at the age of 96.

“The only thing I regret about the whole thing I wish my mom could have lived a little bit longer to find out about it,” Chip Didier said. “She would have loved that and would have been really proud. I know she is looking down excited knowing that dad is heading to the Hall of Fame.”