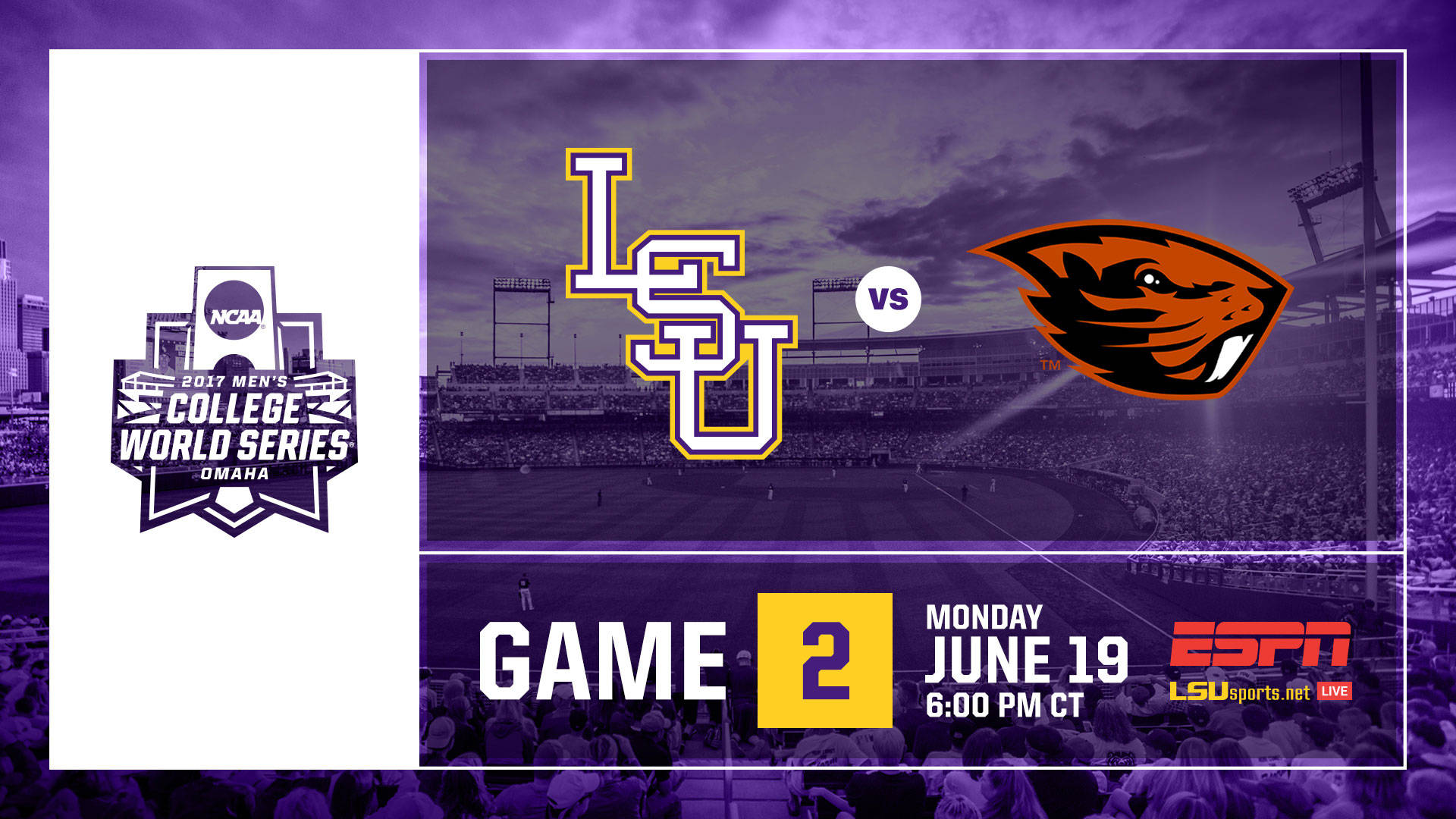 The LSU-Oregon State game will be carried on the LSU Sports Radio Network (WDGL 98.1 FM in Baton Rouge), and the radio broadcast may be heard at www.LSUsports.net/live.

Monday’s game will be televised on ESPN, and it may also be viewed online at WatchESPN.com and the Watch ESPN app.

LSU advanced to the winners’ bracket game against Oregon State after the Tigers defeated Florida State, 5-4, on Saturday night. Oregon State advanced with a 6-5 victory Saturday over Cal State Fullerton.

LSU, the 2017 SEC regular-season and tournament champion, has won 17 games in a row and 22 of its past 24 contests. Oregon State enters Monday’s game riding a 22-game win streak.

WEAR GOLD!
The Tigers will be wearing their gold today so you should too. #LSU will also be the home team against OSU. #GeauxCWS pic.twitter.com/Upd12GrZkl

“Oregon State really has an outstanding ball club,” said LSU coach Paul Mainieri. “It seems like every player in their lineup was chosen in the draft, and they have a tremendous pitching staff with a sub-2.00 ERA. We have a lot of respect for (OSU) Coach (Pat) Casey and his staff, and I expect that this game will be a complete blast. Both teams are outstanding and will play with every bit of heart that they have, and hopefully, we’ll score more runs than they do”

Mainieri said that freshman right-hander Eric Walker (8-1, 3.46 ERA) will start Monday’s game on the mound for LSU. Walker has been brilliant in his two postseason starts, defeating Arkansas in the SEC Tournament final and earning a win over Rice in the NCAA Regional final.

LSU is hitting .294 as a team this season with 62 homers and 74 steals in 100 attempts. Sophomore leftfielder Antoine Duplantis is batting a team-high .326 with 14 doubles and 58 RBI. Senior second baseman Cole Freeman is hitting .325 with 41 RBI and 54 runs scored.

Junior rightfielder Greg Deichmann is batting .318 and leads the Tigers in homers (19) and RBI (73), while senior shortstop Kramer Robertson is hitting .314 with 18 doubles, eight homers, 43 RBI and a nation’s best 83 runs scored.

OSU is expected to counter with sophomore right-hander Bryce Fehmel (5-2, 3,80 ERA). The Beavers’ pitching staff has a minuscule 1.86 ERA, and has limited opponents to a 1.95 batting average.

Oregon State is hitting .296 as a team this season with 29 home runs and 62 steals in 80 attempts. The Beavers are led at the plate by sophomore infielder Nick Madrigal, who is batting .385 with 19 doubles, two triples, four homers and 37 RBI.

Junior infielder/catcher KJ Harrison is batting .324, and he has a team-high eight homers for the Beavers with 13 doubles and 39 RBI, while sophomore outfielder Trevor Larnach is hitting .307 with 16 doubles, three homers and 44 RBI.

LSU has a 2-0 all-time mark against Oregon State; the only prior two meetings between the teams came at the 2012 NCAA Baton Rouge Regional, where the Tigers posted wins over the Beavers by scores of 7-1 in the regional semifinal and 6-5 (10 innings) in the regional final. LSU is 5-4 against Pac12 teams in College World Series games – the Tigers are 3-1 vs. Stanford, 2-2 vs. Southern California and 0-1 vs. UCLA.

LSU IN THE NCAA TOURNAMENT
LSU has the highest winning percentage in NCAA Tournament history with a 149-58 (.720) record; the Tigers are competing in the tournament for the 30th time … LSU is the No. 4 NCAA Tournament National Seed, marking the sixth straight year in which the Tigers have been named a National Seed by the NCAA Baseball Committee … LSU and Stanford (1999-04) are the only schools in NCAA history to earn six straight National Seeds … the Tigers are making their 18th College World Series appearance (all since 1986) … LSU and Cal State Fullerton are tied for seventh place in all-time CWS berths … LSU has won six College World Series titles (1991, 1993, 1996, 1997, 2000, 2009) and the Tigers are tied with Texas for the most CWS championships; first-place Southern California has 12  CWS titles … LSU has a 37-24 (.607) all-time mark in College World Series games.

SERIES RECORD VS. OREGON STATE
LSU has a 2-0 all-time mark against Oregon State; the only prior two meetings between the teams came at the 2012 NCAA Baton Rouge Regional, where the Tigers posted wins over the Beavers by scores of 7-1 in the regional semifinal and 6-5 (10 innings) in the regional final. LSU is 5-4 against Pac12 teams in College World Series games – the Tigers are 3-1 vs. Stanford, 2-2 vs. Southern California and 0-1 vs. UCLA.