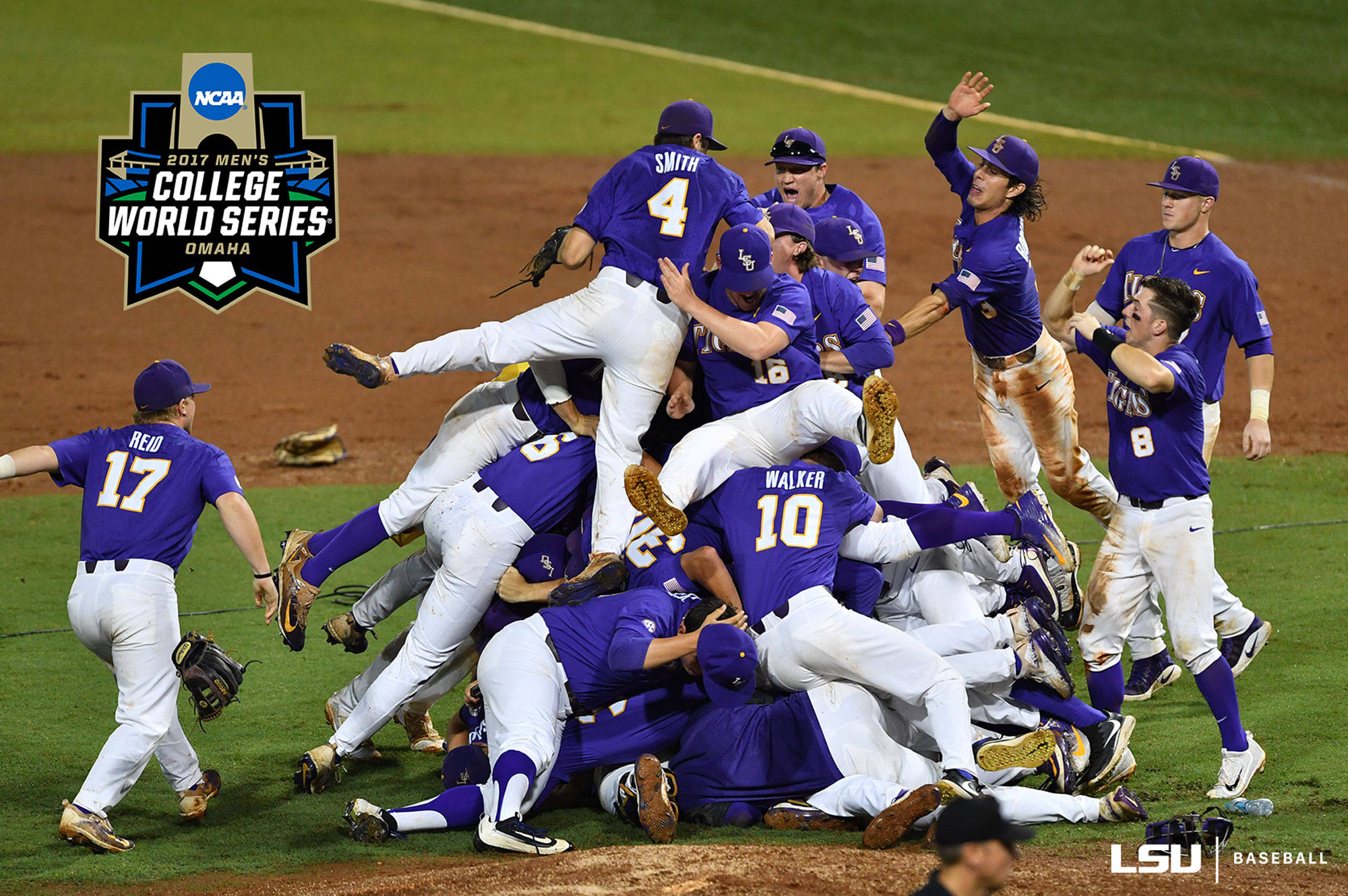 BATON ROUGE — For the 18th time in program history, the LSU Baseball team is Back Home in Omaha!

The Tigers will take a 16-game winning streak to the 2017 College World Series.

It Was Over When…

LSU scored six runs in the top of the fifth inning to overcome a 4-3 deficit. The Tigers collected three hits and three walks in the frame and never looked back. The key hit was a two-run double by Kramer Robertson, who finished 3-for-5 with three runs and two RBI.

Three rain delays, seven Bulldogs pitching changes and more than five hours later, LSU realized it goal of a trip to Nebraska for the second time in three seasons…at 1:35 a.m.

No. 4 national seed LSU will face Florida State (45-21) in its CWS opener on either Saturday or Sunday in Omaha’s TD Ameritrade Park. Game dates and times are expected to be announced Monday.

The winner of the Tigers and Seminoles will face either No. 1 Oregon State or Cal State Fullerton. The full schedule is listed below.

The LSU Athletics Ticket Office will accept request for all potential games LSU may participate in during the 2017 College World Series from LSU Baseball season ticket holders and current LSU students only. Ticket details are listed below.

The game was delayed 31 minutes from its scheduled 8:04 p.m. start time due to lightning in the area that pushed back pregame warmups.

Things started exactly the way LSU wanted, as the “visiting” Tigers chased Mississippi State starter Jacob Billingsly before he recorded an out in the first inning. RBI singles by Antoine Duplantis and Greg Deichmann scored Kramer Robertson and Cole Freeman to put LSU ahead 2-0. Trey Jolly entered for State and got two strikeouts to end the frame.

LSU added another run in the top of the second when Michael Papierski led off the inning with a walk, moved to second on a sacrifice, third on a single by Robertson, and scored on a balk by Jolly. However, State avoided the crooked number with two more strikeouts including one by reliever Trysten Barlow that ended the inning.

After allowing only a single in the first two innings, LSU starter Jared Poche’ had a difficult time in the third inning. He walked four of the six batters he faced and allowed a two-run home run to Harrison Bragg that narrowed the Tigers’ advantage to 3-2. Caleb Gilbert entered for the Tigers and allowed RBI singles by Jake Mangum and Elijah MacNamee before getting out of the jam trailing 4-3.

Following a scoreless fourth inning, LSU was able to take advantage of three walks by Bulldogs reliever Denver McQuary to spark a six-run inning. Deichmann, Josh Smith and Beau Jordan each walked to load the bases, setting up a two-run double to right field by catcher Michael Papierski. After regaining the lead, 5-4, Jake Slaughter blooped an RBI single to left that scored Jordan.

After Papierski came around the score on a wild pitch, Robertson lined a double off first baseman Brent Rooker’s glove that scored Slaughter and gave LSU an 8-4 advantage. With one out in the top of the fifth, it was the last hit recorded until LSU scored five runs the ninth inning.

The final run of the inning scored when State second baseman Hunter Stovall committed an error.

LSU took a 9-4 lead to the bottom of the fifth, and Gilbert capitalized with a second-straight perfect inning.

With one out in the top of the sixth, a minutes-long downpour halted the game for 31 minutes at 11:21 p.m. CT.

After resuming just before midnight, both LSU’s Gilbert and State reliever Cole Gordon combined to retire 15-straight batters until a walk by Gilbert in the bottom of the eighth.

LSU loaded the bases on two walks that ended Gordon’s night and a hit batter by Peyton Plumlee in the top of the ninth. Plumlee exited and State’s Spencer Price got Nick Coomes to pop out before hitting Robertson with a pitch to drive in Zach Watson from third.

With the bases still loaded and LSU ahead 10-4, Cole Freeman drilled a two-out double down the left-field line to drive in Papierski and Smith.

Four minutes later, at 12:55 a.m., LSU led 12-4 with two on and two outs in the ninth when the sky opened up and lightning struck again, bringing the tarp back for the third time.

When the game resumed at 1:23 a.m., Duplantis drove in two runs with a single just in front of the right fielder that scored Freeman and Robertson for a 14-4 lead.

LSU’s Hunter Newman allowed only a two-out hit in the bottom of the ninth before getting Hunter Stovall to pop up on the infield. The Tigers dog-piled at the pitcher’s mound to celebrate their return to Omaha.

Match-ups for the opening round of the 2017 College World Series:

Game dates and times are expected to be announced Monday.

LSU’s Athletics Ticket Office will accept request for all potential games LSU may participate in during the 2017 College World Series from LSU Baseball season ticket holders and current LSU students only.

LSU will use the LSU Priority Point Ranking system and limitations will be placed on all requests. LSU expects to sell out our allotment of tickets for all games the Tigers will play.

The ticket holder of record will be be required to pick-up the tickets in Omaha for each game. A valid photo ID will be required at the time of pick-up. No name changes or authorizations for another individual to pick-up will be accepted. Will Call locations and times will be determined prior to each game.