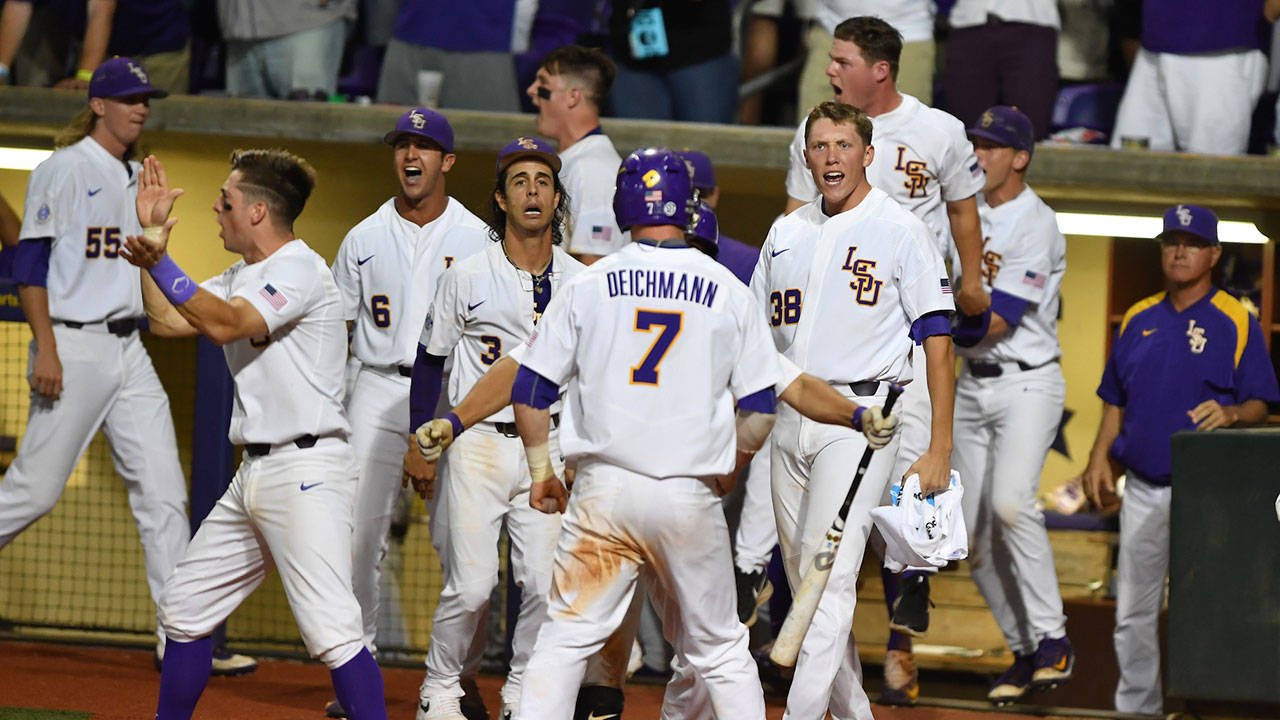 Trailing 3-0 in the bottom of the eighth, LSU mounted an offensive threat and finally made it count after countless missed opportunities earlier in the contest. The Tigers won their 15th-straight game.

Here’s How It Happened

A leadoff walk to Kramer Robertson and a one-out single just over the shortstop’s glove by Antoine Duplantis put runners on first and second for clean-up hitter Greg Deichmann. The Golden Spikes Award semifinalist laced a double into the left field corner to drive in two runs and narrow the deficit to 3-2 with the capacity crowd coming to their feet.

Mississippi State right-hander Riley Self (5-2) gave up an RBI single to Watson, who crushed a 2-0 pitch to left field that tied the game at 3-3. Beau Jordan continued the rally with a perfectly executed hit-and-run single through the right side that put runners on first and third. Following an intentional walk to Smith that loaded the bases, Papierski popped out to deep center field. Watson scored easily on the sacrifice fly and LSU took a 4-3 lead to the ninth.

Zack Hess (7-0), who entered for starter Alex Lange to end the Bulldogs’ three-run eighth, finished off the ninth by working around a leadoff single that would reach third base after two ground-ball outs. Hess struck out leadoff hitter Hunter Stovall on three pitches to send The Box into a frenzy.

Though he had no decision, Lange pitched a gem for the Tigers, which trailed 1-0 into the eighth inning only by virtue of a first-inning bases-loaded hit-by-pitch. He credited with 7 2/3 innings pitched, allowing three runs on three hits with 10 strikeouts and six walks (two intentionally).

LSU (47-17) and Mississippi State (40-26) will play game 2 of the best-of-three series on Sunday at 8 p.m. CT. The game will be televised by ESPN2 (updated Sunday morning), and broadcast on the LSU Sports Radio Network beginning at 7:30.

The Tigers need one more win to advance to the College World Series. The winner of the Baton Rouge Super Regional will face the winner of the Florida State versus Sam Houston State series. The Seminoles rallied from a 4-0 deficit for a walk-off win in the ninth inning Saturday, 7-6.

What Fans Around the World Heard

Saturday’s contest had a little bit of everything for the 11,836 fans who packed The Box for an all-SEC rivalry: an early run by the visitors on a bases-loaded hit-by-pitch only one out into the game; a tremendous pitching performance by both LSU and State’s starters who kept the game separated by one run through seven innings; a clutch two-out, two-RBI double by the Bulldogs that pushed their advantage to 3-0; and a dramatic four-run eighth by LSU that broughts the home crowd back to life – all with Omaha on the horizon for one team.

In the top of the first inning, the Bulldogs loaded the bases again Lange with a single sandwiched between a pair of walks. Lange hit Jake Mangum to drive in Brent Rooker and give Mississippi State a 1-0 lead with one out. Hunter Vansau and Elijah MacNamee both struck out swinging to end the threat, as Lange’s opponents fell to 0-for-19 with the bases loaded in 2017.

Working with a 1-0 lead, 6-foot-3 State lefty Konnor Pilkington worked around two two-out walks in the bottom of the second inning, but was able to get Michael Papierski to roll into a fielder’s choice and end the inning.

Following the first-inning miscue, Lange threw 17 of his next 21 pitches for strikes and struck out 5-of-6 batters.

LSU collected its first two hits in the bottom of the fourth, as Duplantis and Zach Watson each singled. However, with runners on second and third and one out, Jordan and Josh Smith each popped out – Jordan’s just behind the infield grass and Smith’s to the wall in right field that may have fell victim to the wind.

The Tigers had another opportunity to tie the game in the sixth when Papierski doubled and moved to third on a sacrifice bunt by Jake Slaughter. With the infield playing in, Robertson’s ground ball to third was fielded on the base line just behind Papierski, who was caught between bases and tagged out. A groundout by Freeman ended the inning.

Meanwhile, Lange continued to pitch masterfully through the seventh, retiring 19 of 21 batters without allowing a hit and facing one over the minimum since allowing the run to score with one out in the first inning.

LSU chased Pilkington when Jordan singled just past the third baseman and Smith walked to start the bottom of the seventh. The State left-hander allowed only four hits in six shutout innings with four walks and four strikeouts.

Plumlee entered and got the first out on a sacrifice by Papierski. Slaughter then popped up to shallow center field, where Jake Mangum caught the second out then throw home to get Jordan tagging from third. The close call was reviewed before being confirmed by the umpires.

Lange allowed a one-out double to Hunter Stovall in the top of the eighth – his first hit allowed since the first inning – and intentionally walked Rooker. A wild pitch on a strike out moved runners to second and third with two outs. With a base open, LSU elected to pitch to clean-up hitter Cody Brown, who sliced a double past a diving Duplantis. Two runs scored to give the Bulldogs a 3-0 lead.

After an intentional walk, Lange was lifted in favor of Hess who recorded the final out on a ground ball back to the mound to setup the comeback in the bottom of the frame.