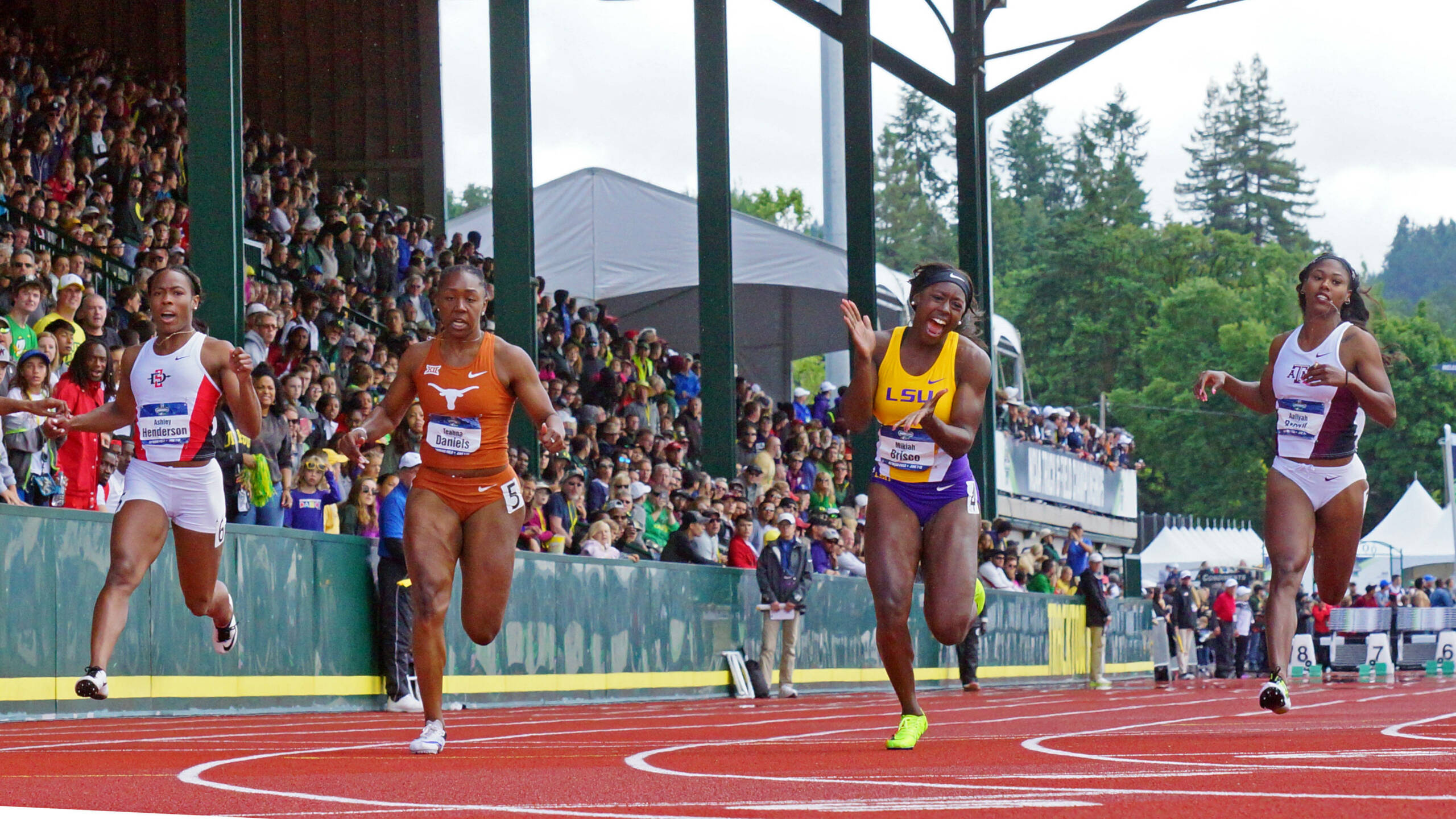 EUGENE, Ore. – Junior Mikiah Brisco snapped a nine-year drought as LSU’s first NCAA Champion in the 100-meter dash since 2008 as her victory Saturday propelled the Lady Tigers to tie for seventh place at the 2017 NCAA Division I Outdoor Track & Field Championships with a total of 32 points scored at Hayward Field.

Brisco led five All-American performances by the Lady Tigers on the final day of the 2017 collegiate season as she became LSU’s seventh NCAA 100-meter champion in the program’s storied history.

Three women added fifth-place national finishes in their individual events on the final day of the meet as junior Aleia Hobbs followed Brisco in fifth place in the 100 meters, junior Kymber Payne finished fifth nationally in the 400-meter hurdles and senior Jada Martin crossed the finish line fifth in the 200-meter dash. Payne and Martin then ended the meet by leading LSU to the bronze medal in the 4×400-meter relay.

The Lady Tigers actually matched their male counterparts after the Tigres tied for seventh place in Friday’s men’s finale at the NCAA Outdoor Championships when they totaled 20 points in their two days of action.

“I’m so proud of our women for the way they fought for every single point today,” said LSU head coach Dennis Shaver. “Mikiah winning the 100 meters and continuing that tradition for our program speaks volumes for her as a competitor to line it up against a field like that in a venue like this and win the thing. That sparked us all the way through the (4×400-meter) relay. You could see those women feed off of that and find that extra bit of motivation to go out and compete to their very best today.

“I’m especially proud with the way they responded after what happened in the (4×100-meter) relay in our very first event on Thursday. It is disappointing to see your team disqualified in an event you’ve performed so well in all year long. They kept it together and qualified well after that to put themselves in this position here today.”

The race for the women’s team championship went down to the wire as Oregon won the 4×400-meter relay to clinch the title with a winning total of 64 points for the weekend. Anything less than a win in the final race of the meet would have handed the title to Georgia, which scored 62.2 points, all in the field events, for second place in the final standings.

USC finished well back in third place with 43 points for the meet, while Kentucky rounded out the team trophy finishers in fourth place with 40 points. Also edging the Lady Tigers was Florida in fifth place with 39 points, as well as Arkansas in sixth place with 38.2 points.

Brisco left the 12,992 fans packing the Hayward Field stands buzzing with her improbable victory in the 100-meter final as she beat Oregon’s hometown favorite Deajah Stevens to the finish line for the title.

The race was won from the start as Brisco fired out of the blocks and built a commanding lead through the 60-meter mark that no one in the field could overcome. Her winning time of 10.96 seconds (+0.3) smashed her previous personal best of 11.14 set earlier this year and earned her the title of NCAA Champion by nearly one tenth of a second ahead of Stevens’ 11.04 in the final.

“It was the best start all season,” Brisco said of the key to her win. “I have to watch the video, but I felt really good out of the blocks. When I got out of my drive phase and into running upright, I didn’t see anybody, so I was just like, ‘Just hold on to it, you can win this,’ and that’s what I did.”

“It feels amazing,” Brisco said of winning her first NCAA title. “That’s the goal for everybody; to come here to nationals and do their best and win a national title. That’s my first individual title, so it feels really good.”

Brisco’s 10.96 tied her for the No. 4 spot with former Bowerman Award winner Kimberlyn Duncan on LSU’s all-time outdoor performance list in the women’s 100 meters. Hobbs, who arrived in Eugene with a PR time of 10.85 to her credit this season to rank No. 2 in school history, earned her second career All-America honor in the event with a fifth-place finish after clocking 11.12 in Saturday’s final.

Payne picked up her first career All-America honor in the final of the 400-meter hurdles as she crossed the finish line in fifth place with a time of 56.60 after qualifying Thursday with a heat-winning 56.05.

Payne became the second Lady Tiger in as many seasons to place fifth in the 400 hurdles at the national meet after former All-American Chance Chase did so as a senior in 2016. Arizona’s Sage Watson won the event in a time of 54.52, while USC’s Anna Cockrell (55.36) was second, USC’s Amalie Iuel (55.82) was third and Texas’ Ariel Jones (56.52) was fourth in front of Payne.

Kymber Payne followed with her 1st career All-America honor as she placed 5th in the 400 hurdles running 56.60 in the final. #LSU @kyymmy pic.twitter.com/dEh44bfRlU

Martin kept the ball rolling for the Lady Tigers with another fifth-place finish in the 200-meter dash as she clocked a wind-legal 22.85 (+1.1) for her best career finish in an NCAA individual final. She eclipsed her previous best finish of sixth place at an NCAA Championship set this indoor season. Martin added four points for the Lady Tigers after she earned the very last spot in the final from Thursday’s prelims.

Florida’s Kyra Jefferson made history with her win in the 200-meter final as she took down former Lady Tiger Dawn Sowell’s 30-year-old collegiate record of 22.04 with a winning time of 22.02 on Saturday. Also climbing the medal podium in the event was Washington in second with a time of 22.39 and Harvard’s Gabrielle Thomas in third with a time of 22.61.

Those finals appearances were just a warm up for both Martin and Payne as they closed out this year’s NCAA Championships running the second and third legs, respectively, on LSU’s 4×400-meter relay team.

After sophomore Rachel Misher led off strongly in 51.73 on the opening leg, Martin carried the Lady Tigers into contention with Oregon and USC as she turned in a team-leading 51.43-second split. Payne then carried in 52.15 before handing off to senior Travia Jones for a 51.68-second split on the anchor leg as the Lady Tigers finished with a seasonal-best time of 3 minutes, 26.99 seconds to win the bronze medal.

It marked LSU’s best finish in the women’s 4×400-meter relay since scoring the silver medal as NCAA runners-up in 2012 as Misher, Martin, Payne and Jones combined to run the fourth-fastest time in school history for the event. They also slashed more than two seconds from their previous seasonal-best time of 3:29.10 entering the meet.

Oregon clinched the team championship with a collegiate-record time of 3:23.13 while USC followed closely behind in second place with a run of 3:23.35. LSU edged Texas A&M’s fourth-place time of 3:27.26 for the last spot on the medal podium with the bronze.

Saturday’s finale at the NCAA Division I Outdoor Track & Field Championships also saw senior Nataliyah Friar take her final jumps as a Lady Tiger as she opened the triple jump with a best of 42 feet, 5 ¼ inches (+0.2) for 20th place in the field. Friar closed out her collegiate career as a two-time All-American while scoring in both the long jump and triple jump at the NCAA Championships while at LSU.

LSU was among five programs finishing among the final team Top 10 on both the men’s and women’s sides at this year’s NCAA Outdoor Championships as the Tigers and Lady Tigers tied for seventh place this weekend at Hayward Field. Florida, Oregon, Arkansas and Georgia also earned top-10 team finishes with both genders during the championship.

Ten LSU athletes also combined for 13 All-American performances over the course of the week as senior Rebekah Wales put the Lady Tigers on the scoreboard for the first time on Thursday with her fifth-place finish in the women’s javelin final.