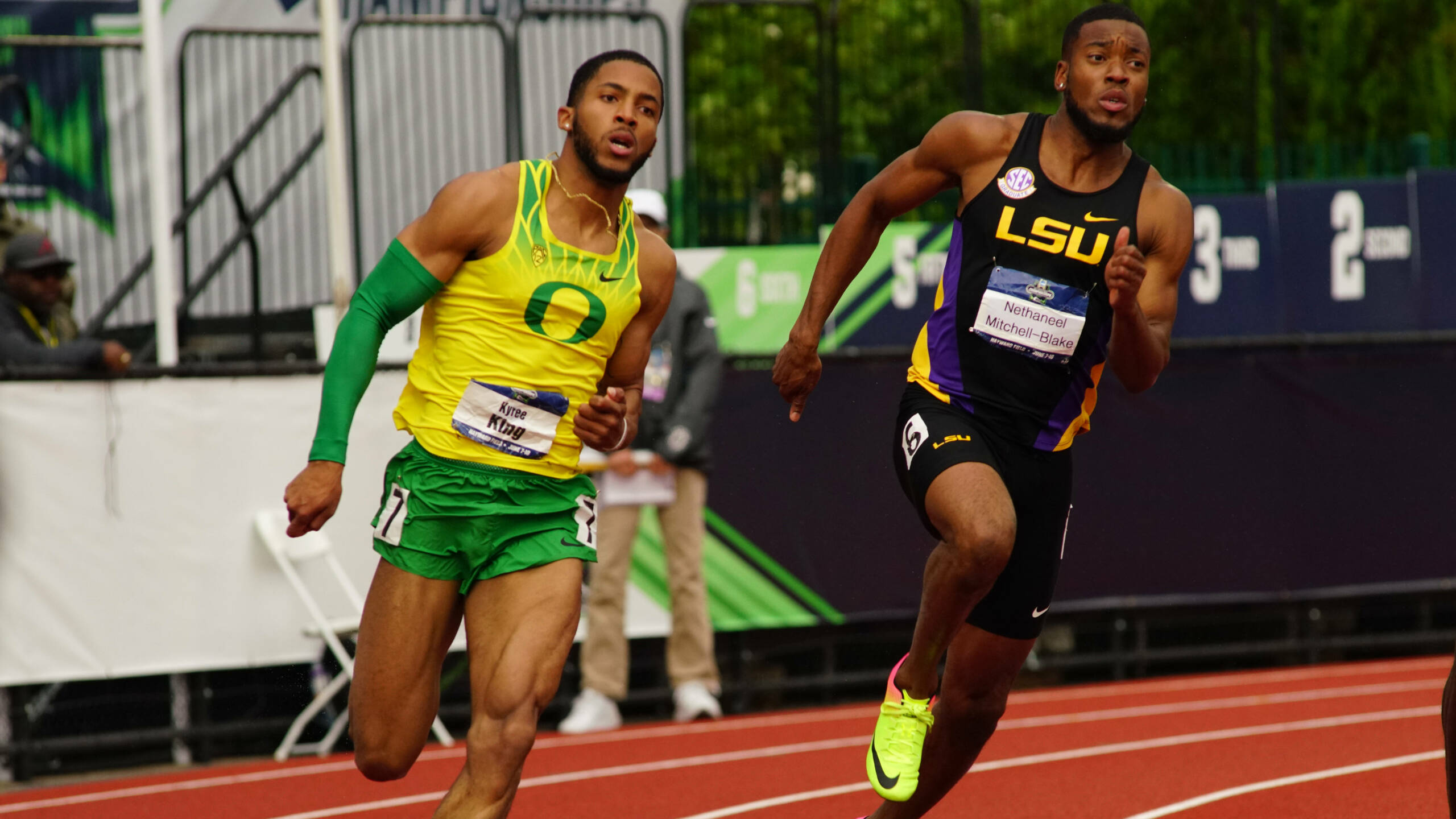 EUGENE, Ore. – Seniors Michael Cherry and Nethaneel Mitchell-Blake each climbed the medal podium in Friday’s men’s finale at the 2017 NCAA Division I Outdoor Track & Field Championships as they extended LSU’s streak of top-10 finishes to 20-straight seasons while tying for seventh place in the final team standings.

The Tigers totaled 20 points in two days of men’s competition at Hayward Field to tie Tennessee for seventh place overall and earn their 20th-straight top-10 finish at the NCAA Outdoor meet. They have finished among the top-10 teams in the final men’s standings each season since 1998.

Senior Johnnie Jackson opened the scoring for the Tigers on Wednesday afternoon as he posted the team’s first three points of the meet with a sixth-place national finish in the men’s hammer throw competition.

“I’m proud of the way our men’s team finished the meet after what happened early on with the relay,” said LSU head coach Dennis Shaver. “Our guys stepped up big and really earned their way back into the Top 10 at this meet. You need guys like Nethaneel (Mitchell-Blake) and Michael (Cherry) to have your back when facing that kind of adversity, and they had ours today.

“Those guys can really be proud of the way they performed today. They’ve done that time and again for us. I’m now looking forward to seeing what they can achieve in the next phase of their careers.”

Florida defended its men’s championship with 61.5 points in two days of action at the University of Oregon as Texas A&M finished as the national runner-up with 59.5 points for the meet. Virginia trailed in third place in the final men’s standings with 36 points, while Arkansas rounded out the team trophy winners in fourth place overall with 33 points.

Mitchell-Blake picked up his eighth and ninth career All-America honors in Friday’s finale while totaling a team-leading 11 points for the championship between the 100-meter and 200-meter dashes.

He took his mark in the 100-meter final for the second-straight season and sprinted to a career-best sixth-place national finish in the event with his run of 10.26 into a -2.1 headwind. Tennessee’s Christian Coleman had a title-winning time of 10.04 followed by Houston’s silver medalist Cameron Burrell in 10.12 and North Carolina A&T’s bronze medalist Christopher Belcher in 10.19.

Nethaneel Mitchell-Blake put #LSU on the board in Friday’s men’s finale with 6th in the 100m final! He clocked 10.26 (-2.1). @WurldOfBlake pic.twitter.com/pCJRtQgUAw

Mitchell-Blake returned to the track 45 minutes later for his first ever appearance in the 200-meter final at the NCAA Outdoor Championships and scored the silver medal with a strong sprint of 20.29 despite a blistering headwind of -3.1 meters per second. Unable to see Coleman or Alabama’s Jereem Richards on his inside, Mitchell-Blake was strong over the latter half of the race to match his best ever NCAA individual finish.

“Execute your own race,” Mitchell-Blake said of his mindset going into the 200-meter final. “At the end of the day, everyone’s got the same weather conditions. Nothing makes you special, just execute the plan. There is no room for second thoughts. The second you doubt yourself, that’s failure straightaway.

“My objective was to get out hard, run my own race, but came up short. I knew it was going to come down to the wire. It’s a star-studded field, the numbers don’t lie. With that headwind, everybody ran a great race. I wanted to run a really hard curve, get to the home straight, relax and run. Unfortunately, I came up just a little bit short.”

.@WurldOfBlake ended his #LSU career as the #NCAATF Outdoor Silver Medalist in the 200 meters running 20.29 into a -3.1 headwind! pic.twitter.com/tvxHguWgCf

Fans watching the men’s 400-meter final on ESPN might have been concerned seeing Cherry coming off the Bowerman Curve in eighth place in the race. But the senior from Chesapeake, Virginia, dug deep to pass the likes of Baylor’s Wil London (45.72), Alabama’s Steven Gayle (45.59), Oregon’s Marcus Chambers (45.28), Auburn’s Akeem Bloomfield (45.13) and USC’s Michael Norman (44.88) over the final 100 meters and finish off a bronze-medal-winning 44.77 to match his second-fastest time of the season.

Cherry showed his strength running into a strong headwind down the homestretch to earn the title of NCAA Outdoor Bronze Medalist for the second-straight season. It was his third medal-winning performance in the 400 meters in his two seasons with the Tigers as he was also crowned the NCAA Indoor Silver Medalist earlier this season.

Texas A&M’s collegiate-record holder Fred Kerley added the NCAA Outdoor title to his indoor crown from earlier this season with a winning 44.10 followed by Auburn’s Nathon Allen in second place at 44.69.

“I really saved too much,” Cherry said of the first half of his race. “Coach (Dennis) Shaver and Coach Bennie (Brazell) were just telling me over and over, ‘Run your own race.’ I wanted to do the opposite of what I did at SECs, which was get out too hard and hammer it. I didn’t hammer it this time. I got out good the first 60 (meters) like I always do, but I started completely relaxing. I got into my own world.

“I looked around and see I’m in dead last at 200 (meters), but I still didn’t panic then, though. I’m like, ‘I know I’m strong enough to come back.’ I stood up tall and started running and finished strong from there.”

Were you worried when @Cherry_Rus was 8th off the Bowerman Curve? NAH! He finished strong in 44.77 for 3rd in the 400m final! #LSU #NCAATF pic.twitter.com/oUUrJqIvor

The Tigers got off to an inauspicious start in Friday’s finals as they were unable to pass the baton around the track in the 4×100-meter relay. After freshman Akanni Hislop handed off to Mitchell-Blake in solid position at the first exchange, Mitchell-Blake was unable to connect with senior Tinashe Mutanga at the second exchange as LSU surrendered its NCAA title to Houston.

The 2017 NCAA Division I Outdoor Track & Field Championships will come to a close Saturday as the women’s finals are scheduled to begin at 1:30 p.m. CT. The Lady Tigers line up in finals for the first time at 6:22 p.m. as juniors Mikiah Brisco and Aleia Hobbs run the 100-meter dash. Junior Kymber Payne follows in the 400-meter hurdles at 6:57 p.m., while senior Jada Martin rounds out LSU’s individual finalists for the 200 meters at 7:07 p.m. Events run through the 4×400-meter relay final at 7:51 p.m.

ESPN will broadcast live coverage of Saturday’s women’s finale beginning at 5:30 p.m. CT while events are set to stream on ESPN3.com from 1:30 p.m. Live results are also available at http://flashresults.com.