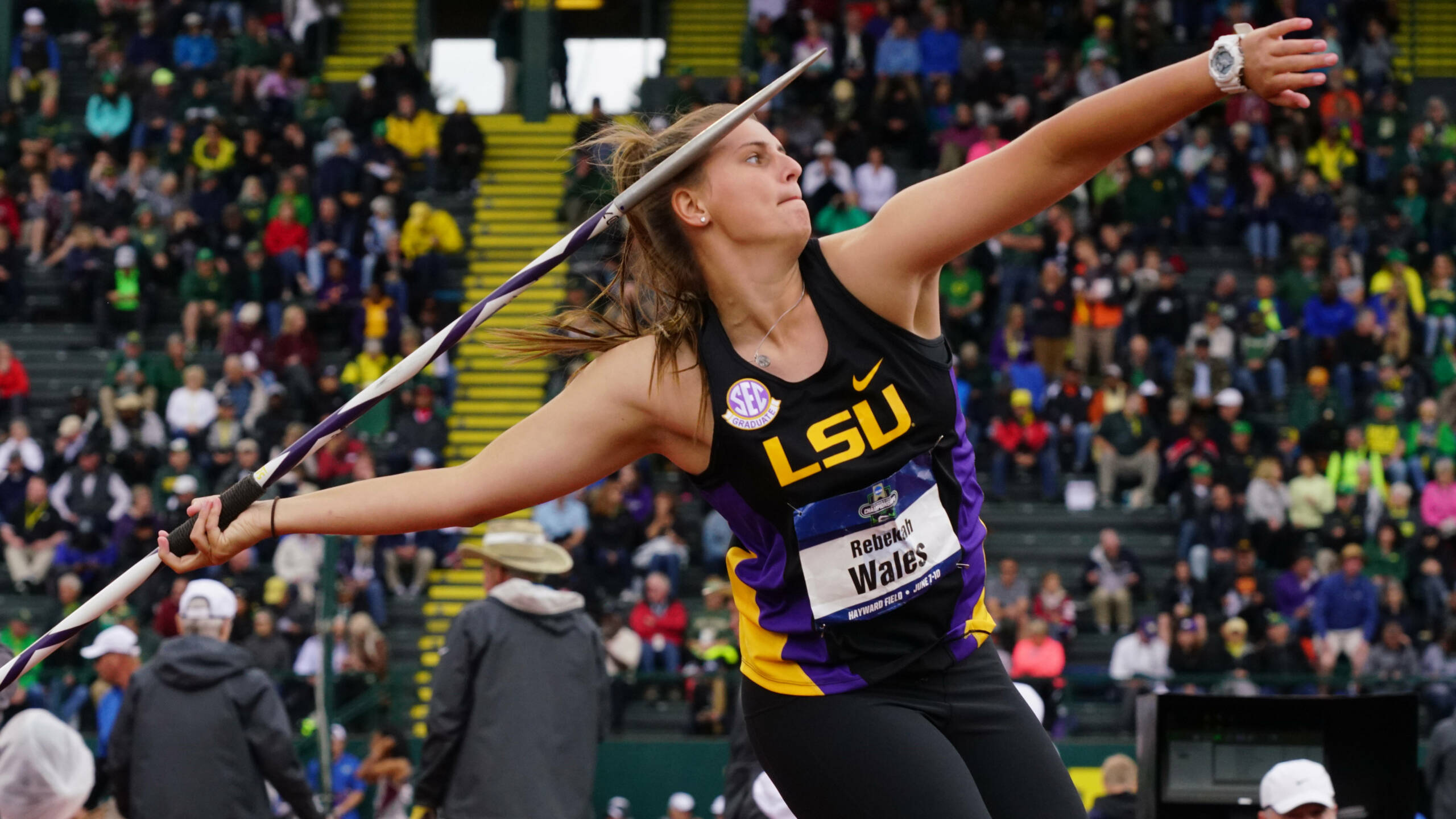 EUGENE, Ore. – Senior Rebekah Wales stepped onto the javelin runway for the final time as a Lady Tiger on Thursday at the 2017 NCAA Division I Outdoor Track & Field Championships and cemented her legacy with a third career All-America honor as she threw 180 feet, 2 inches for fifth place in the final at Hayward Field.

Wales made history as LSU’s first three-time All-American in the javelin as she put the Lady Tigers on the scoreboard with their first four points of the championship thanks to her fifth-place finish.

After returning to the NCAA final with a qualifying throw of 179-3 on her third attempt in qualifying, Wales solidified fifth place with an improved effort of 180-2 in the fourth round before fouling each of her last two in the competition. She closed out her career as an All-American for the third time after placing fourth nationally as a sophomore in 2015 and sixth in the final as a junior last spring.

While five-time Olympian Laverne Eve owns the distinction as LSU’s only NCAA Champion in the event with her victory in 1987, Wales has earned her place in history as the program’s only two-time SEC Champion from her victory at the conference meet in May and three-time All-American with her fifth-place national finish on Thursday night.

Wales’ title-winning personal best of 191-0 in the fifth round at the SEC Championships last month ranks her No. 2 behind Eve on LSU’s all-time outdoor performance list at the close of her collegiate career.

Virginia Tech’s Irena Sediva (192-9) edged Florida’s Marija Vucenovic (192-2) by just seven inches for the NCAA title in the event as both posted their top marks in the competition in the fifth round of throws. Rounding out the finalists were Memphis’ Ashley Pryke (186-9) in third, Stanford’s Mackenzie Little (181-6) in fourth, Duke’s Katelyn Gochenour (178-0) in sixth, Texas A&M’s Audrey Malone (175-4) in seventh and Texas’s Haley Crouser (174-2) in eighth.

“We’re very proud of Rebekah and what she’s done for our program over her four years at LSU. We really needed her to pick up some points for us there after what was an up-and-down day in qualifying on the track. She stepped up for us,” said LSU head coach Dennis Shaver. “She’ll go down as one of the best we’ve ever had in that event in the history of our program. That’s something to be proud of.

“Our women faced some adversity today, no question about it. The challenge now is to put today behind us and be prepared to maximize the five chances to score we do have coming up on Saturday.”

Junior Mikiah Brisco and Aleia Hobbs got off to a quick start in 100-meter qualifying as they sprinted to a 1-2 finish in the first semifinal heat to become LSU’s first finalists on the track at this year’s championship.

Despite running into a strong headwind of -1.4 meters per second down the Hayward Field homestretch, Brisco surged ahead of her teammate over the latter half of the race and crossed the line first in 11.19 as Hobbs followed in second place with a time of 11.28. They earned automatic qualification into Saturday’s final with the third-fastest and sixth-fastest times of the day.

Lady Tiger sophomore Kortnei Johnson came up one place shy of advancing to her first NCAA final on time as her 11.37 (+0.2) was fifth-best in the second heat and eighth overall in the round. Freshman Cassondra Hall finished in a tie for 16th place among the 24 semifinalists as he time of 11.47 (-1.4) was good for fourth behind Brisco and Hobbs in the first heat.

Senior Jada Martin later added a qualifying performance in the 200-meter dash as she sprinted to the finish line in 23.00 (+1.9) for third place in the third heat and eighth place overall to advance on time. Johnson had a run of 23.40 (+0.4) in the first heat that earned her 17th place among the semifinalists in the field.

Two weeks ago, Kymber Payne posted a 55.50 personal best to advance to the NCAA semifinals in the 400-meter hurdles for the second-straight season as the top qualifier at the NCAA East Preliminary Rounds held at the UK Outdoor Track & Field Complex in Lexington, Kentucky.

The junior from Compton, California, went one better on Thursday as she qualified for her first career NCAA final in the event with a heat-winning time of 56.05 in the first of three semifinal heats.

It proved to be a comfortable run to the finish line for Payne as she stopped the clock more than one second ahead of Purdue’s Symone Black in second place in the race with a time of 57.15. Payne’s time of 56.05 held up over three heats as the fourth-fastest time of the semifinal, trailing only the heat-winning times of 54.88 by Arizona’s Sage Watson and 55.64 by USC’s Anna Cockrell and the runner-up time of 55.84 by USC’s Amalie Iuel in the second section. Black’s runner-up performance to Payne was seventh-best for the day.

Kymber Payne also advanced to the #NCAATF final in the 400 hurdles as a heat winner as she ran 56.05 in the 1st section! #LSU @kyymmy pic.twitter.com/IpwZ7ZyIaF

Rounding out the eight finalists in the women’s 400-meter hurdles will be Ariel Jones of Texas in fifth place with a time of 56.61, Jade Miller of Harvard in sixth with a run of 56.98 and Katrina Seymour of East Tennessee State in eighth with a time of 57.22. LSU senior Bryiana Richardson also lined up in Thursday’s semifinals where she ran 59.37 for seventh place in the third heat and 19th place overall.

LSU closed out Thursday’s semifinals as an automatic qualifier in the 4×400-meter relay as sophomore Rachel Misher, Martin, Payne and senior Travia Jones teamed to run 3 minutes, 32.26 seconds for a runner-up spot in the third and final heat behind Texas’ 3:30.79. Theirs was the seventh-fastest time of the semifinals as they return to the NCAA final for the second-straight year after finishing fourth a year ago.

Earlier in the day, Jones was the top Lady Tiger in the semifinal round of the 400-meter dash as she took fourth in her heat and 10th in the field with a time of 52.38 in her final collegiate race at the distance. Misher ran a time of 54.64 for seventh place in the third heat and 23rd place in her first NCAA semifinal.

In the first event of the day, the Lady Tigers lined up in the first semifinal heat of the women’s 4×100-meter relay as the favorites to defend their NCAA crown from a year ago while entering the meet with a collegiate-record time of 42.12 this season. But their dreams of a title defense were dashed at the first exchange when officials ruled Johnson received the baton from Brisco outside the 20-meter exchange zone.

While Martin and Hobbs brought the stick home with a heat-winning time of 42.76 for the fastest time of the day, the disqualification wiped their effort off the board and ruled them out of Saturday’s final.

The final of the women’s 4×100-meter relay will be run without the three fastest schools in NCAA history as co-collegiate-record holders Oregon were disqualified at the NCAA West Preliminary Rounds and Texas A&M was disqualified from the second semifinal heat on Thursday, both for an exchange-zone infraction.

Three freshmen also debuted in an LSU uniform in the semifinal round at the NCAA Division I Outdoor Track & Field Championships on Thursday as Tonea Marshall and Brittley Humphrey both lined up in the same heat in the 100-meter hurdles and Ruby Stauber followed with an appearance in the second section of the 800-meter run.

Humphrey placed fourth in the third heat of the hurdles and 17th overall in her NCAA semifinals debut with a time of 13.36 (+0.2), followed by Marshall in sixth place in the heat and 19th place overall in 13.69.

Stauber closed out her freshman season with a 22nd-place finish in the 800-meter semifinals as she clocked 2:08.65 as the seventh runner across the line in the second section. Stauber is one of the most decorated 800-meter freshmen in school history as she earned All-America honors with a fifth-place finish in her first national final at the NCAA Indoor Championships. She also swept SEC Indoor and SEC Outdoor silver medals for the event while being named the SEC Women’s Outdoor Co-Freshman Runner of the Year.

Other field events semifinals saw senior Nataliyah Friar jump a best of 20-1 (-0.3) in qualifying for 14th place overall and freshman Nickolette Dunbar throw a series-best of 51-2 ¼ for 22nd place overall in her debut.

ESPN will broadcast live coverage of Friday’s men’s finale beginning at 7:30 p.m. CT while events are set to stream on ESPN3.com from 2:30 p.m. Live results are also available online at http://flashresults.com.