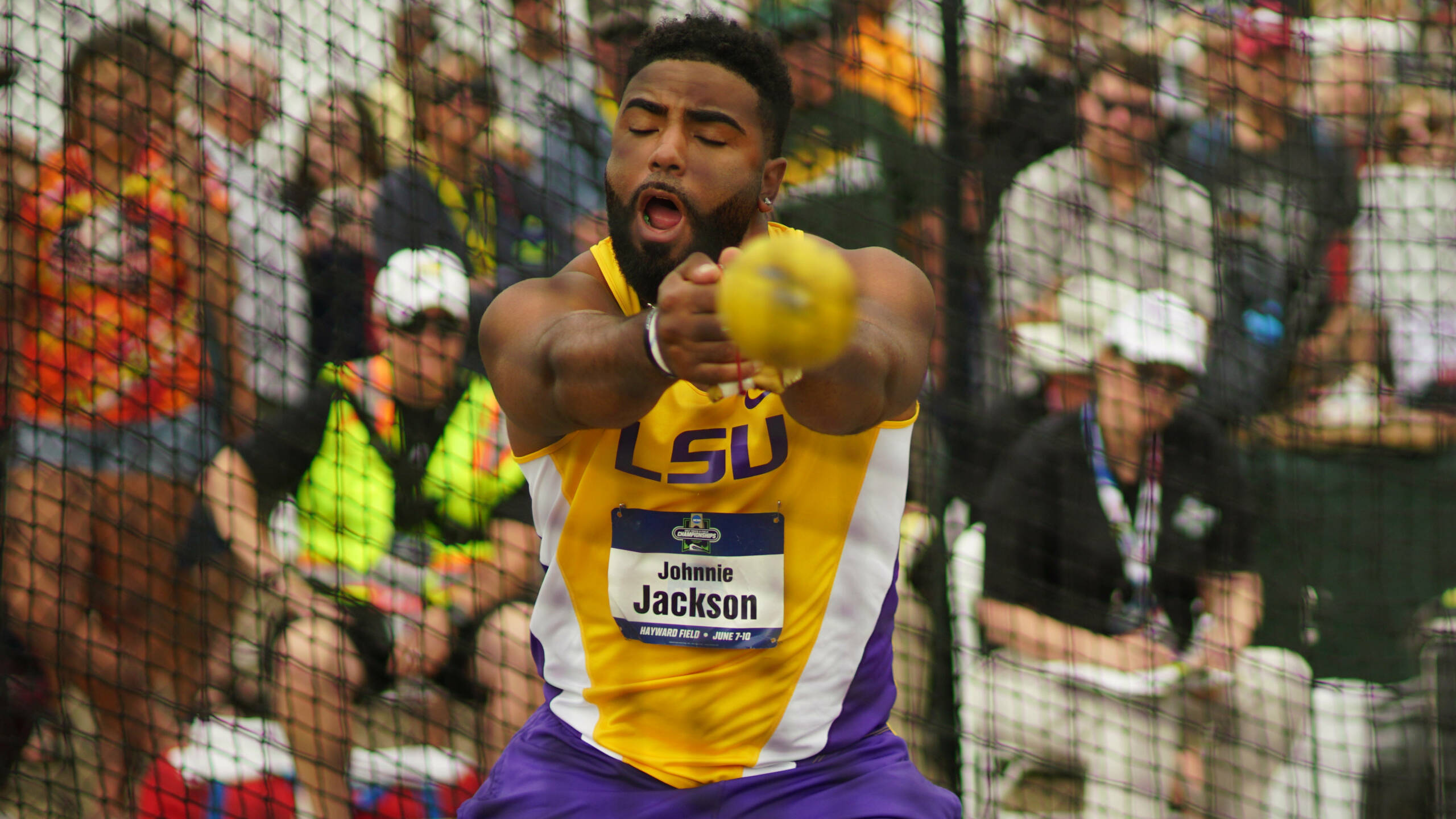 EUGENE, Ore. – Johnnie Jackson put the finishing touches on an outstanding senior season Wednesday at the 2017 NCAA Division I Outdoor Track & Field Championships as he threw a four-foot personal best of 235 feet, 4 inches on his third attempt to take home an All-American sixth-place finish in the men’s hammer throw.

Returning to the circle for his third preliminary attempt, Jackson unleashed a series-best of 235-4 to briefly move into third place before settling into fourth place in the overall hammer standings heading into the finals. He ended with a best of 230-7 in the finals on his fifth throw before earning his first career All-America honor in the event with a sixth-place finish in his final collegiate meet.

Jackson put the first points on the scoreboard for the Tigers at this year’s NCAA Championships while becoming LSU’s fourth All-American in the men’s hammer throw in program history and first since Michael Lauro in 2012. Lauro was a three-time All-American in the event from 2010-12, while David Paddison in 1993 and former NCAA Champion Walter Henning from 2009-11 also scored for the Tigers at the NCAA meet.

Jackson’s performance was more than four feet clear of his previous personal best of 231-2 set earlier this season at the Mt. SAC Relays as he locked up the No. 2 spot on LSU’s all-time outdoor performance list in his final appearance.

“I’ve had great practices since we’ve been here (in Eugene), and I was just hoping I could replicate in the meet what I was doing in practice. I did, thankfully,” Jackson said. “I feel like I can throw it that far, or say farther in the meets, I just have to put it together. I felt great in practice this week to where I knew I could throw that coming out here today.

“I was catching some pretty good distance at 228 and 229 (feet) to start and I wasn’t really getting on it. So, I knew it was there. I felt really strong today, I just needed to be sharp with my movement and execute.”

It proved to be one of the most competitive hammer competitions in recent memory at the NCAA Championships as Cornell’s Rudy Winkler captured the NCAA title with the leading throw of the day at 243-2, followed by Southeastern Louisiana’s Alexander Young in second place at 241-8 and Kansas’ Gleb Dudarev in third place at 240-11.

Rounding out the scorers were Virginia’s Hilmar Orn Jonsson (237-5) in fourth, Georgia’s Denzel Comenentia (235-4) in fifth and Alex Poursanidis (234-4) in seventh and Michigan’s Joseph Ellis (230-9) in eighth.

While scoring for the Tigers in their first event of the championship, Jackson closed out a sensational senior season as a two-time All-American and two-time All-SEC performer for one of the most decorated seasons by a thrower in school history. The Cherry Hill, New Jersey, native was also crowned the NCAA Indoor Champion in the weight throw back in March while also earning the title of SEC Indoor Silver Medalist in the weight throw and SEC Outdoor Silver Medalist in the hammer throw this spring.

With three points already on the board from Jackson’s finish in the hammer final, the Tigers gave themselves four other chances to score on the track with qualifying performances in Wednesday’s semifinal races.

They earned the right to defend their NCAA title in the men’s 4×100-meter relay from a year ago with an automatic qualifying run of 38.89 seconds in the third and final semifinal race. Redshirt freshman Donte Jackson, sophomore Nethaneel Mitchell-Blake, junior Tinashe Mutanga and sophomore Jaron Flournoy combined to run the sixth-fastest time among automatic qualifiers as the second-place team in their section.

Mitchell-Blake will be among six sprinters doubling in both the 100-meter and 200-meter finals on Friday night after qualifying from each of his individual semifinals on the opening day of the meet.

He grabbed the very last spot into the men’s 100-meter final after clocking his second-fastest time for the season at 10.03 (+1.6) to advance fourth in the third heat and eighth overall as a timed qualifier. Mitchell-Blake ended his day with a heat-winning 20.24 (+1.3) in the second section of the 200-meter dash to qualify with the fourth-fastest time of the night.

Flournoy came up just two places short of advancing to his first career NCAA final in the 200 meters as he placed 10th overall in his semifinals debut with a time of 20.51 (+1.6) for fifth place in the first section.

Jackson was not the only Tiger to post a personal-best performance in Wednesday’s opener at the NCAA Championships as senior Michael Cherry earned a return trip to the men’s 400-meter final with the fastest race of his collegiate career in the very first semifinal heat.

Lining up in Lane 6 to the outside of Texas A&M’s collegiate-record holder Fred Kerley in Lane 4 and Oregon’s Marcus Chambers in Lane 5, Cherry bided his time through the first 200 meters of the race and then around the final curve before surging past Chambers (44.92) down the homestretch and through the finish line to grab the second automatic qualifying spot with a 44.73 personal best for second place.

The first heat produced the three fastest times of the semifinal round as Kerley took the tape in a comfortable 44.57 with Cherry second in 44.73 and Chambers third in 44.92. LSU senior LaMar Bruton was sixth place in the heat with a time of 46.31. Auburn teammates Akeem Bloomfield (44.95) and Nathon Allen (45.05) won the second and third heats, respectively.

Cherry eclipsed his previous personal-best time of 44.77 run at the LSU Alumni Gold meet on April 22 for his third sub-45-second time of the season. He also clocked 44.92 at the NCAA East Preliminary Rounds.

Bruton (leadoff leg), Flournoy (second leg), Cherry (anchor leg) and senior Blair Henderson (third leg) closed out Wednesday’s opener at Hayward Field with a 12th-place semifinal finish in the 4×400-meter relay as they teamed to run 3 minutes, 5.32 for fourth place in the third heat. LSU entered the meet as the two-time defending NCAA Outdoor Champions in the men’s 4×400 relay.

The No. 3-ranked Lady Tigers take their turn in semifinal qualifying on Thursday as the women’s competition kicks off at the 2017 NCAA Division I Outdoor Track & Field Championships. LSU will line up 15 semifinalists in individual events and relays on the track beginning at 6:32 p.m. CT, while three Lady Tigers are also set to compete in field-event qualifying beginning at 7:45 p.m.

ESPN2 will broadcast live coverage of Thursday’s events beginning at 6:30 p.m. CT while events begin streaming on ESPN3.com beginning at 12:30 p.m. Fans can also follow the Lady Tigers in action as Flash Results posts the live results online at http://www.flashresults.com.